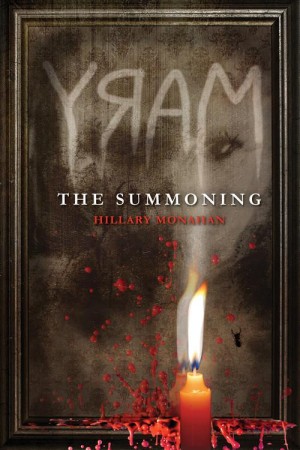 There is a right way and a wrong way to summon her.

Jess had done the research. Success requires precision: a dark room, a mirror, a candle, salt, and four teenage girls. Each of them–Jess, Shauna, Kitty, and Anna–must link hands, follow the rules . . . and never let go.

A thrilling fear spins around the room the first time Jess calls her name: “Bloody Mary. Bloody Mary. BLOODY MARY.” A ripple of terror follows when a shadowy silhouette emerges through the fog, a specter trapped behind the mirror.

Once is not enough, though–at least not for Jess. Mary is called again. And again. But when their summoning circle is broken, Bloody Mary slips through the glass with a taste for revenge on her lips. As the girls struggle to escape Mary’s wrath, loyalties are questioned, friendships are torn apart, and lives are forever altered.

A haunting trail of clues leads Shauna on a desperate search to uncover the legacy of Mary Worth. What she finds will change everything, but will it be enough to stop Mary–and Jess–before it’s too late?

Why did I read this book: I was definitely one of those kids who played Bloody Mary at every sleepover (and made friends watch scary movies, told ghost stories, tried ouija boards and seances and the whole thing). Given that I’m also a big fan of horror novels, MARY: The Summoning was a no brainer.

It begins as a half-hearted joke when four teenage girls relieve their childhood sleepovers and try to summon the ghost of Bloody Mary. After one of the girls, the charismatic and single-mindedly determined Jess, stumbles across an old letter from Mary Worth (the girl who would become Bloody Mary), she convinces her three best friends to try to summon the specter, insisting she knows how to do it the right way. All it takes is a line of salt in front of the mirror, four girls, a single candle, and the ability to stare down a ghost without running away in fear and breaking the protective ranks formed by linked hands.

It wasn’t supposed to work.

Fascinated by the decaying ghoul behind the mirror glass, Jess, Shauna, Kitty, and Anna decide to try to summmon her again… but something goes wrong, and Mary escapes the glass. Hungry with the taste of blood, Mary is free and on the hunt for Shauna – stalking her in any reflective surface, ready to try to pull the terrified girl into her realm and suck her blood dry. Now, it is up to these four friends to figure out Bloody Mary’s past if they are to find a way to break the curse and save Shauna from a terrible fate worse than death.

Hillary Monahan’s debut young adult novel, MARY: The Summoning begins with an irresistible premise: many readers may remember sleepover parties in which seances and Bloody Mary summonings were attempted. In The Summoning, Monahan explores the possibility that the game actually works and just what such a ghost would do once called.[1. In retrospect, why in the world did I – or any kid – play that game? What can one possibly gain from summoning a ghost (famous for her scratching and maiming) in a mirror? OLDER AND WISER now – no mirror-demons for me, thank you very much.] Works of supernatural horror often require a transgression; here, four girls decide to haphazardly summon a ghost, who escapes their wards and haunts one very unlucky teen protagonist. The curse is a good one, too, as Mary isn’t just confined to mirrors and can crawl out of any reflective surface, including but not limited to windows, television screens, brass doorknobs, chrome shower parts, and – wait for it! – shiny eyeglass lenses.

The result is an effective haunting story that reads like a teen scream flick, borrowing imagery from the American remake of The Grudge (shower and bus scenes, anyone?), but with a colonial American twist on the legend of the eponymous Mary. I can even picture the tagline for the movie: Once she’s got the taste of your blood, she won’t let go.[2. Well, there’s a way around that (reminiscent of another Japanese horror movie, The Ring/Ringu), but therein lie spoilers.] Monahan does a brilliant job of racheting up tension and keeping the stakes high throughout the novel – I also applaud her for keeping the story relatively simple (no elaborate time traveling or paradoxical wormhole curses, thankyouverymuch) but sufficiently unpredictable, especially when it comes to certain character motivations. Most of all, I appreciated that while Mary Worth gets some fascinating and sympathetic backstory relayed through found letters written from her to her elder sister, the ghost that she becomes is not a cuddly, redeemable creature. To quote a character at one of my favorite parts of the book:

“That pastor, that Elizabeth girl? Fine. Haunt them, but what did we do to her?”

Jess was about to reply, but Kitty cut her off. “I don’t think that’s how ghosts work. Not in the movies, anyway. Think about it. They die and then something disturbs their resting place or someone breaks their stuff and they come back. I just don’t think they can see right or wrong anymore.”

Mary’s letters from the past are fascinating and sympathetic, ending with her inevitable slide into rage and revenge – the ghoulish Mary behind glass is a far cry from the innocent girl who starts these letters at the beginning of the book, and I appreciate that bitter twist very much.

While there is plenty to enjoy about The Summoning, the book is ultimately the literary equivalent of popcorn teen horror – there’s very little in the way of writing style or character development (especially regarding the novel’s protagonist). Monahan writes with a no-frills, directly descriptive voice, detailing Mary’s haggard, putrid appearance with the kind of imagery one would expect: skittering bugs that retreat into dead eye sockets, rotting flesh, the required stringy long tangly ghost hair, and so on and so forth. There’s also a tendency to end chapters on melodramatic revelations or “horror moments”, for example:

Her ragged, ruined hand flattened on the windshield in front of my face. I could see the skin moving, the gash in her palm burping out a pair of tiny black beetles that scurried down the car. She swept her hand to the side. The flourish erased my name, the phantom letters now replaced by a smear of black tar raining inky tears down the glass.

“I’ll wait,” I said, dropping my head down into one of my pillows. “If I need a doctor later, we’ll go, but for now let’s see how I do.” Everyone nodded, all of us wearing matching frowns. Earlier, I’d feared my friends would be torn apart by what happened at Anna’s house, but I realized then it wouldn’t happen for one reason. We shared a ghostly burden.

On the character front, the first person narrator is the one who picks up the curse – and oddly, she’s the most wooden of the entire cast. The four friends are reduced to mostly stock stereotypes: the beautiful charismatic blonde (Jess), the insecure/timid heartbroken one (Kitty), the snarkily smart abrasive one (Anna), and the bland everygirl one who kinda holds the group together but has no other defining characteristics (Shauna). By far, Jess is the most interesting character and the most conflicted in terms of backstory and motivation. I’m not entirely sure her motivations make any sense – yet – but I’m hopeful to see more in book 2.

While I’d still easily call on Rin Chupeco’s The Girl from the Well as the best beach horror read of the summer, MARY: The Summoning packs a nice little punch and I certainly have no problems recommending it. If you’re a fan of teen slashers and ghost stories (ala I Know What You Did Last Summer or cheesefests like Stay Alive) probably like this book as much as I did.

Over at Kirkus: Borderline by Mishell Baker