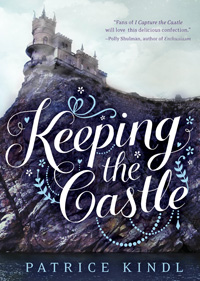 Seventeen-year-old Althea is the sole support of her entire family, and she must marry well. But there are few wealthy suitors–or suitors of any kind–in their small Yorkshire town of Lesser Hoo. Then, the young and attractive (and very rich) Lord Boring arrives, and Althea sets her plans in motion. There’s only one problem; his friend and business manager Mr. Fredericks keeps getting in the way. And, as it turns out, Fredericks has his own set of plans . . . This witty take on the classic Regency–Patrice Kindl’s first novel in a decade–is like literary champagne! [1. Can we please take a moment to examine this blurb? What does “literary champagne!” mean, exactly? Bubbly? Light? HORRIBLE? Because I really hate champagne and to me, this is a very unfortunate line]

Why did I read this book: I love Regencies and I had this book on my radar ever since I first heard about it. There were many starred reviews in the path to publication so as soon as it was published, a bought a copy.

It is a truth universally acknowledged that a single girl in possession of a deprecated Castle and lacking a fortune must be in want of a rich husband. Althea Crawley is a seventeen—year-girl who is the main support of her entire family, the effective head of their household and the only hope they have to keep their Castle for her younger brother. As such, she must marry well and soon. Unfortunately for the Crawleys, despite her unparalleled beauty, Althea’s strong opinions and loud mouth often cause her problems and as it just so happens, she recently lost a most suitable suitor because of that. The family can barely afford to buy food but still, they soldier on, hoping for the best.

So when the young, attractive and rich Lord Boring arrives in the neighbourhood with a party of at least another 4 marriageable young men, the Crawleys go into overdrive in preparations for the upcoming season of balls and hunts. And at first, everything seems to be going really well for Althea and Lord Boring and a proposal is expected at any given time. But then why is he spending so much time with Althea’s stepsister Charity (the one with the money) and why does the insufferable Mr. Fredericks keep getting in the way and arguing so much with Althea?

Keeping the Castle is a mixed bag>. Parts of it are brilliantly funny and the book can be read easily in one go – it is short, sweet and romantic. The best thing about is Althea’s voice. At times extremely observant especially when it comes to the roles women play and the utterly unfair of men’s expectations toward women. For example when she makes this observation about one of her suitors:

I keep forgetting how ridiculously sensitive and illogical men were. He assumed that his fortune would buy a beauty; I assumed that my beauty would procure me a rich husband. It seemed much the same thing to me, but evidently what was permissible in a man was not in a woman.

But at other times, she could also be frustratingly oblivious especially when it came to Mr. Fredericks. I adored her competence at taking care of her house and family and her loyalty and dedication to them and to her friends.

That said…it is a truth generally accepted that I can and will enjoy a familiar premise and unoriginal tropes if a story truly shines through it. Unfortunately, Keeping the Castle despite its great main character wasn’t anywhere good enough to make me forget how utterly conventional of a Regency it was.

Everything about the story was predictable and recognisable – all storylines followed an established pattern, very similar to Jane Austen’s, Georgette Heyer’s and many a Historical Romance novels. The secondary characters are all stock Regency characters (the mother, the stepsisters, the villains, the hero) without any real depth. Althea and Mr Frederick’s dynamics and bickering very much the standard for this type of novel (and resembling Lizzie Bennet and Mr Darcy’s so much).

Although parts of it were admittedly delightful and if I am being honest, I did finish it with a smile on my face, Keeping the Castle is a book that plays it really, really safe and travels on extremely familiar routes. Sometimes the familiar is enough to offer comfort – and there is nothing wrong about that. But sometimes the familiar is just that: ordinary, conventional, mundane. Unfortunately this one fell into the latter type of familiar for me.

I don’t really have a lot more to say about it. I have mostly forgotten about it (even though I finished it two days ago). I do wonder: for those readers that haven’t read as many Regencies as I have, this could prove to be a complete delight. Because I did find sufficient things to enjoy (like Althea’s voice and the prose) and since I heard her other books are absolutely fabulous I went ahead and got me a copy of Lost in the Labyrinth. Let’s see if I can still become a fan of Patrice Kindl. Fingers crossed.

As aforementioned I finished reading the book with a smile on my face. That’s because the last chapter was delightful and I did love the proposal scene. This line was my favourite:

Let us agree that we are marrying so we can go on quarrelling in the greatest possible comfort and convenience.

Reading Next: Singing the Dogstar Blues by Alison Goodman