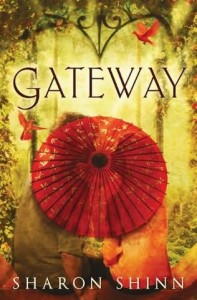 How did I get this book: ARC from publisher

Why did I read this book: My reasons are twofold: 1. I love Sharon Shinn’s fantasy novels, especially those with a YA sort of bend (Summers at Castle Auburn is one of my favorites), so when I learned of Gateway, I immediately searched far and wide for an ARC; and 2. As the good majority of fantasy novels – especially of the YA persuasion – deal with almost exclusively white characters and the western European pantheon, when I learned Gateway had a Chinese-American protagonist and set in a fantasy land akin to an alternate China, I was ecstatic. There’s a whole lot of diversity out there, and it’s shocking how underrepresented non-white ethnicities are in mainstream fiction.

Summary: (from amazon.com)
As a Chinese adoptee in St. Louis, teenage Daiyu often feels out of place. When an elderly Asian jewelry seller at a street fair shows her a black jade ring—and tells her that “black jade” translates to “Daiyu”—she buys it as a talisman of her heritage. But it’s more than that; it’s magic. It takes Daiyu through a gateway into a version of St. Louis much like 19th century China. Almost immediately she is recruited as a spy, which means hours of training in manners and niceties and sleight of hand. It also means stealing time to be with handsome Kalen, who is in on the plan. There’s only one problem. Once her task is done, she must go back to St. Louis and leave him behind forever. . . .

Adopted by caucasian parents, Chinese-born Daiyu has lived a loving, full childhood. On the edge of adulthood, Daiyu works tirelessly at her summer internship, saving money for college. But, when she stumbles across a vendor selling a beautiful black ring at the St. Louis Fairgrounds, Daiyu feels a compulsion to spend a little of her hard earned cash to buy it. The strange vendor tells Daiyu that the ring is for her and her only – the material it is made of even translates to her name, “Daiyu” or black jade. Reluctant to let the opportunity pass her by, especially considering the bargain price the vendor offers for the sense of rightness that the ring emanates on her finger, Daiyu purchases the trinket – and soon finds herself transported to another world after she walks under the Gateway Arch. This new world’s rules are different from Earth’s – Daiyu discovers that while the social hierarchy and history shares some similarities to the America she left, there are some drastic differences. The dominant culture is that of the han, similar in appearance and custom to Earth’s Chinese people (of whom Daiyu resembles with her own Chinese birthright), whereas the working, lower-classes are comprised of cangbai (caucasians) and heiren (black men and women).

In this strange new land, a young cangbai man comes to Daiyu’s aid immediately, introducing himself as Kalen, and he whisks Daiyu away to meet a heiren named Ombri. Daiyu soon learns that the world she has seemingly stumbled into is not due to mere happenstance – she’s the last valuable piece of the puzzle that Ombri and his wife Aurora need to stop a great catastrophe from occurring. For Ombri and Aurora are not mere humans like Daiyu or their servant Kalen; they are beings that can travel between iterations and create magic objects – like Daiyu’s ring – to transport others too, and they have a mission of dire importance that only Daiyu can accomplish. A handsome, persuasive man named Chenglei – a being like Ombri and Aurora – has insinuated himself in this new iteration as the most powerful man in the world, and is set on abusing that power to his own ends. Ombri insists that Chenglei has destroyed whole worlds before, and unless they can get close enough to place a magical bracelet on his arm, transporting Chenglei back to his own iteration, this version of the world is in great peril. And this is where Daiyu comes into the plan – as a han and one who has travelled between iterations, she has the ability to come close to Chenglei in the upperclass han society. Close enough, that is, to put the magicked bracelet on Chenglei’s arm and send him back to his own world.

But though Daiyu wants to believe everything Ombri tells her, she remains uncertain. Is she simply dreaming, like Dorothy in her trip to Oz? Even if she isn’t, is Chenglei really so terrible that she is willing to fight someone else’s war at great mortal peril on her part? As her friendship deepens with Kalen blossoming into romance, and as Daiyu’s memories of her own world fade each day, does she even want to leave this new world?

Gateway is a quiet novel with its tender romance and engaging fantasy/science fiction elements. Ms. Shinn explores the possibility of parallel worlds, a familiar trope, but takes a softer, more folklore-based approach (as opposed to a technical, science fiction route). And, for the most part, her explanations are well thought out, intriguing and believable. The world of Jia, this new land that Daiyu has stumbled into, is at once familiar and alien – taking elements of early twentieth century western european civilization (automobiles putter about, but horse-drawn carriages are still the norm), its firm class boundaries (with marriages made for wealth and power, and social standing influenced by lineage and connections), blended with a Chinese slant on traditions and fashions. In terms of plot though, Gateway runs a bit thin. The most glaring deficiency is that the immediate looming danger that Omni and Aurora impress upon Daiyu (and the readers, by proxy) is never really apparent. While Chenglei is a charming and untrustworthy character, he doesn’t ever seem EEEVIL – certainly not evil or destructive enough to warrant the life or death high stakes that are stressed earlier in the book. As such, Daiyu’s mission in Jia seems less central and urgent than perhaps it should. Also, similar to its almost afterthought of a plot, the system of magic in Gateway is simplistic and disappointing – only a few characters can create magicked objects, and even when they do so, it’s completely off-screen. I’m all for character-centric novels, but Gateway‘s lack of determination and direction in so far as Daiyu’s purpose in the book and the role of these different universes and magical objects prevented me from truly engaging with the story.

Though the plotting left me wanting, the real draw to the novel lies with the relationship between Daiyu and Kalen, and the romantic angle of the story. I truly did enjoy Daiyu and Kalen as they interacted, but I can’t help but feel that their falling in love happened too quickly, too predictably. From the first appearance of Kalen, readers know he is Daiyu’s intended love interest – and though there are some wonderful conversations between the two characters, they move so quickly from friends to being head over heels in love, that I felt like I had reader-whiplash. To be fair, this is a complaint I have in many young adult novels that employ a true love romance – there’s a lot of simply saying that two characters fall in love without ever really showing why or how, and to me it feels like…well, cheating. In the scant 300 pages of Gateway, I simply wasn’t convinced that Daiyu and Kalen were so incredibly in love – though other readers may feel differently!

As a heroine on her own, Daiyu is a compelling and admirable heroine. She agrees to do this task for Omni and Aurora, but does not blindly follow their instructions – which is a very, very cool thing. Instead of simply taking someone else’s word for how evil a man Chenglei is, Daiyu forms her own opinions and examines her own conscience each step of the way. Can she fight a war based only on someone else’s volition? It’s an intriguing moral dilemma, and one I think Ms. Shinn handles beautifully in this novel. So far as the secondary characters go, Kalen is a charming counterpart to Daiyu, but somewhat lacking her dimension. The others, from Daiyu’s “adoptive” han aunt to Omni and Aurora are all similarly flat as characters. In fact, more so than Kalen, I found myself most intrigued by Chenglei himself as a character, or the secondary love interest, Quan (another han noble, set up to be Daiyu’s future husband should she stay in Jia)! Again, though, this could simply be a matter of personal reading tastes – the “bad guys” are so much more intriguing than the good ones, or at least they are when it comes to fiction.

Despite these shortcomings, I did enjoy Gateway and would recommend it to Sharon Shinn fans – the ending in particular is well-executed. But, I can’t help but wish there was a little more substance to this fluffy story.

Notable Quotes/Parts: There’s no posted excerpt for the book, so you’re out of luck in that department! But, in terms of writing awesomeness, I don’t think it gets any better than the last chapter of the book. Alternately heartwrenching and heartwarming, Gateway finishes with everything I love about Sharon Shinn’s work.

Additional Thoughts: As I mentioned above, there’s a dearth of non-white young adult fiction. But, if you look hard enough, there are many fabulous titles worth exploring, particularly in the Asian YA fantasy/speculative fiction realm. Here are a few titles I have read and enjoyed, or have on my radar for future reads: 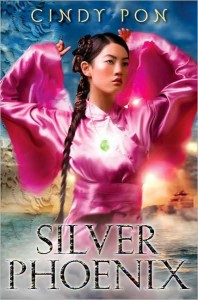 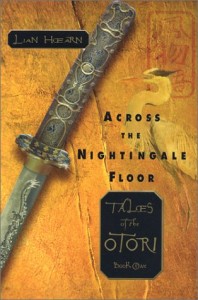 Silver Phoenix by Cindy Pom, Across the Nightingale Floor (The Tales of the Otori series and a really dark, heartwrenching one I recommend only to the staunch of heart) by Lian Hearn, Eon: Dragoneye Reborn by Alison Goodman (one of my favorite reads of 2009), The Book of a Thousand Days by Shannon Hale (a bit more Middle Grade, but still a lovely book), and Guardian of the Spirit (Moribito) by Nahoko Uehashi. 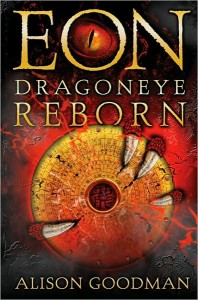 Verdict: A readable novel recommended for Sharon Shinn fans, though it isn’t one of her better works. Still, there’s enough to make Gateway worth the investment, especially if you’re looking for a lighter, less substantive romantic fantasy read.

Reading Next: Spellspam by Alma Alexander