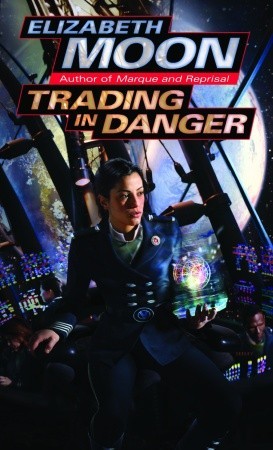 Kylara Vatta is the only daughter in a family full of sons, and her father’s only child to buck tradition by choosing a military career instead of joining the family business. For Ky, it’s no contest: Even running the prestigious Vatta Transport Ltd. shipping concern can’t hold a candle to shipping out as an officer aboard an interstellar cruiser. It’s adventure, not commerce, that stirs her soul. And despite her family’s misgivings, there can be no doubt that a Vatta in the service will prove a valuable asset. But with a single error in judgment, it all comes crumbling down.

Expelled from the Academy in disgrace–and returning home to her humiliated family, a storm of high-profile media coverage, and the gaping void of her own future–Ky is ready to face the inevitable onslaught of anger, disappointment, even pity. But soon after opportunity’s door slams shut, Ky finds herself with a ticket to ride– and a shot at redemption–as captain of a Vatta Transport ship.

It’s a simple assignment: escorting one of the Vatta fleet’s oldest ships on its final voyage . . . to the scrapyard. But keeping it simple has never been Ky’s style. And even though her father has provided a crew of seasoned veterans to baby-sit the fledgling captain on her maiden milk run, they can’t stop Ky from turning the routine mission into a risky venture–in the name of turning a profit for Vatta Transport, of course.

By snapping up a lucrative delivery contract defaulted on by a rival company, and using part of the proceeds to upgrade her condemned vehicle, Ky aims to prove she’s got more going for her than just her family’s famous name. But business will soon have to take a backseat to bravery, when Ky’s change of plans sails her and the crew straight into the middle of a colonial war. For all her commercial savvy, it’s her military training and born-soldier’s instincts that Ky will need to call on in the face of deadly combat, dangerous mercenaries, and violent mutiny. . . .

Stand alone or series: Book 1 in the Vatta’s War series

How did I get this book: Bought (AAAAAGES ago)

Why did I read this book: The first book in the Vatta’s War series, this is a title that I vaguely remember reading – or picking up, enjoying, but never really finishing – when it first came out. Recently, I’ve been on a science fiction kick, so when I was consulting my shelves for potential Old School Wednesdays books, this one immediately jumped out at me (along with A Soldier’s Duty by Jean Johnson, the Honor Harrington series, and Tanya Huff’s Valor books). After skimming around, I decided it was time to dust off Kylara Vatta and give her a proper chance to wow me. (Spoiler alert: SHE DID.)

Let me preface this review by saying holy smokes. How did it take me so long to get into this book? Why didn’t I devour this whole in 2004, when I first bought the novel?! HOW did this book languish on my TBR for so many years, half-forgotten? Suffice it to say, I enjoyed Trading in Danger very much. Hell, I’ll come out and say that I loved it. But I’m getting ahead of myself – first, the review:

Cadet Kylara Vatta knows something isn’t right when she’s summoned into her Commandant’s office with little preamble. Being at the top of her class with an exemplary performance record, Ky’s visits with her superior officer usually are nerve-wracking, but genial. This time, though, Ky’s unwittingly stepped in it. Big time. After innocently helping her struggling mentee, Ky is kicked out of the military academy and forced to return home in disgrace. And, while her family feels for Ky, they are not-so-secretly thrilled that she will be coming home and joining the ranks of the family business: Vatta Transport Ltd., a shipping empire with the sole goal of Trade and Profit. Ky’s father, the CFO of Vatta Transport, approaches his only daughter with an intriguing proposition – for her job as part of the Vatta empire, she will become Captain of her very own ship and assigned a milk run to get into the groove of the business. Ky, who fiercely desires independence and to prove herself as a leader, accepts with alacrity – after all, she gets to be Captain of her very own ship. Granted, it’s an old, bucket-of-bolts ship on its final run to the salvage yard, where she’ll be scrapped for money – but it’s still Ky’s ship. At the same time, her family is appeased temporarily because they get to keep Ky under their watch (especially since Ky’s first crew comprises experienced members charged with babysitting the young captain).

The supposed milk run, however, doesn’t quite go as planned. Eager to prove herself as a new Captain, Ky decides to take a side contract independently to deliver some badly needed agricultural machinery to a new colony on the way to the salvage yard – which she knows will turn into future contracts and an impressive profit margin for her maiden command. Things go sour, however, when a war breaks out – mercenaries get involved, communications are shot out, prisoners are taken, and a mutiny erupts. It is up to Ky (with her military training, quick thinking, and desire to prove herself) to save her crew and her ship – and, if all goes well, turn a profit.

Trading in Danger is the first book in the Vatta’s War series and the first novel I’ve had the pleasure of (re-)reading from Elizabeth Moon. As I’ve said above, I loved this book. Protagonist Kylara Vatta is everything I could possibly want in a heroine – she’s young, smart, and incredibly driven. She’s also a sympathetic character with significant emotional depth and – most importantly – a sense of introspection. That is, she thinks about things before she acts, and she weighs the consequences of those actions. Despite this careful planning side of her personality, Ky isn’t perfect and she screws up – but it’s so wonderful to have a main character who weighs her options and reflects on past mistakes. This is especially gratifying when I contrast Ky’s competence against the many impulsive YA SFF heroines in whose brains I’ve been immersed as of late. While I can love an impulsive character governed primarily by emotion without consequence, this type of protagonist becomes frustrating after a while.[1. Seriously, why is it that so many speculative fiction protagonists are the same impulsive, act-first-think-later types? Is it because we equate spontaneity with bravery? It’s food for thought.]

Beyond being the perfect antidote to that impulsive daredevil/gunslinger stock character, Ky Vatta is such a refreshing figure because she also happens to be both young and dedicated to her job. I love that Ky’s central internal struggle in the book is with her desire to be taken seriously as a young person in a leadership position, and her tension with her family particularly at the end of the book. Ky is pragmatic, in that she’ll accept help from her family when she needs it, but she’s also stubbornly independent – when her father has the reaction of trying to protect his baby girl, Ky’s reaction is actually pretty amazing. I quote:

She knew he had meant this message to be warm, loving, consoling, encouraging. So why was she feeling like a cat with its fur rubbed backward? That was obvious… He was still treating her like a feckless girl, who needed protection and guidance and consolation. He was patting her head, putting an arm around her shoulders, as if she had fallen and scraped a knee instead of having faced real danger, death in several forms, and survived by her own abilities.

Beyond this wonderful portrayal of Ky as a main character, Trading In Danger also excels because of Elizabeth Moon’s deft writing style, skillfully blending humor and emotional insight with P&Ls and hardcore ship terminology. Moon writes in the same style as Lois McMaster Bujold in the head of Miles Vorkosigan (admittedly, Ky Vatta isn’t quite at the level of Miles – but she has the potential to get there) – in fact, if you’re reading this review and you are a Miles fan, you’ll probably have already made this comparison. I certainly couldn’t help but compare Miles’ first run as Admiral Naismith at the helm of the Dendarii Mercenaries to Captain Vatta on her initial disastrous/victorious run aboard the Glennys Jones.[2. I strongly suspect this was a conscious hat-tip from Moon to Bujold.] The action is solid, the universe is interesting, and the plot developments slightly predictable but expertly handled.

My only minor complaints when it comes to Trading in Danger? The less developed secondary characters (which stands out only because Ky, in my opinion, is so well-written), and the superficial world-building. We see some wonderful glimpses of socio-economic divides – the difference between the wealthy world of Slotter Key and poorer, newer colony Belinta in the Sabine system, for example – but there is plenty of room for growth. There’s also a lack of actual physics or hard science, but I don’t hold that against the book; this is more of a space opera with an interesting stake in the business of profit, instead of politics. And I like that.

Minor nitpicks said, I thoroughly adored Trading in Danger and wholeheartedly recommend it. I am kicking myself for taking so long to read this book, but on the bright side I have the completed series to read at my leisure. Who’s coming with me?

Notable Quotes/Parts: You can read the official excerpt online HERE or by using the widget below:

Reading Next: Jackaroo by Cynthia Voigt

From the Page to the Screen: I Am Legend