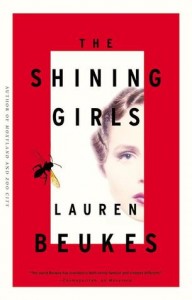 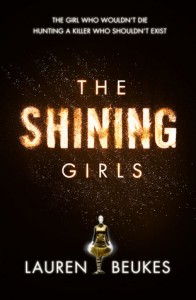 The Time Traveler’s Wife meets The Girl With the Dragon Tattoo in this story of a time-traveling serial killer who is impossible to trace–until one of his victims survives. In Depression-era Chicago, Harper Curtis finds a key to a house that opens on to other times. But it comes at a cost. He has to kill the shining girls: bright young women, burning with potential. He stalks them through their lives across different eras until, in 1989, one of his victims, Kirby Mazrachi, survives and starts hunting him back.

Working with an ex-homicide reporter who is falling for her, Kirby has to unravel an impossible mystery.

THE SHINING GIRLS is a masterful twist on the classic serial killer tale: a violent quantum leap featuring a memorable and appealing girl in pursuit of a deadly criminal.

Why did I read this book: I’ve been meaning to read Lauren Beukes for a while now but to be honest, her books never truly appealed to me. Until this one, until TIME TRAVEL became a possibility.

Lauren Beukes has been on my radar for a while but I never felt inclined to pick her books until l The Shining Girls came along with its promising conceit: Science Fiction meets Thriller in a story featuring a time-travelling serial killer and his one surviving victim looking for revenge.

In Depression-era Chicago, Harper Curtis walks into The House to find a dead body in the hallway and a room full of mementos from dead girls. Their murders, actions he has yet to commit. Those “shining girls” – bright young things, full of potential – call to him and The House obliges by opening its door to other times. And so Harper’s quest through time begins from the 30s to the 90s, alternating decades, back and forth as he stalks girls from their childhood to the moment he kills them.

But then in 1989, one of his victims – Kirby Mazrachi – miraculously survives his savage attack and a few years later becomes an investigative journalist looking for clues about her attack which she suspects was not random. The narrative mostly alternates between the two characters’ viewpoint, the chapters shifting in time, with Harper’s obsessively stalking these shining girls and Kirby’s obsessively stalking Harper.

It’s hard to say when exactly did The Shining Girls went off the rails for me. Perhaps in that awkward moment in which I realised that the time travel here was nothing but gimmick. Perhaps it is my own fault because I often think of time travel as Science Fiction rather than Fantasy but when it became clear that the speculative fiction element came with no explanation whatsoever beyond “it’s the House that does it”, I felt my interest in the story diminishing exponentially. Because at the end of the day, remove the time travel elements and the random “magic house” from this novel and all you have is just another thriller following a man viciously killing women in graphic detail.

I am perhaps being slightly unfair with this snap judgement. One could consider the time travel element and the endless loop that Harper and Kirby seem to be stuck on to be essential to the story and to work as a metaphor for the inevitability of his psychopath tendencies to kill women. Harper’s story starts with his course already traced ahead of him, he knows the girls are to die because he has already killed them:

He remembers doing it. He has no recollection of doing it. One of these things must be true.

As I write this review, it is becoming clear to me how much this bothered me though. I am not averse to elements of Fantasy in Science Fiction nor does it escape me the irony of calling time travel, science. This is obviously something that will affect readers differently.

But moving on: the fact that Harper travels through time does add an interesting historical element as the author tries to convey Chicago through time. This works only to a certain extent because at times the level of historical research became too obvious rather than seamlessly, vividly integrated. The problem here is that how short a space Lauren Beukes has in which to convey this sense of time and place. When attempting to encapsulate for example, Chicago in the 50s and the raging paranoia of the period in a few paragraphs, this is the superficial-at-best result:

For God’s sake, she’s not even a socialist, let alone a member of the Communist Party. But she’s artistic. And these days that’s bad enough. Because artists socialize with all kinds of people.

Finally, it is important for me to note that the focus of The Shining Girls is on extremely graphic, bloody, gendered violence. Harper is killing women and more than that, he is killing women who “shine” and who are “burning with potential”. I am not entirely sure how I feel about this idea of “potential” – what does it mean exactly, why use it as a departure point and premise? This makes me especially wary when it becomes clear that only a few special women have this so-called potential (to the point where the killer has to find these few women through time). Not to mention that some of the girls shine no more and this constitutes a problem for Harper. For example, one of the women he is supposed to kill, doesn’t “shine” because she is a drug addict who lost interest in life – and then we are faced with another similarly uncomfortable idea: that of “squandered” potential. I feel there is a judgement being made here and one could argue that said judgement is being made by a psychopath but I do not think this was addressed or questioned in the narrative enough.

Two things might counteract the above: Kirby and her brilliant, painful portrayal as a survivor (rather than victim) and the author’s attempts to give voice to each victim – even if very briefly and often stereotypically – which might be just enough to make them more than passing female bodies. Might. Maybe.

The Shining Girls is a not entirely successful genre blend (Horror, Historical, Fantasy and Thriller) but is a perfect example of the disconnect that sometimes happen between the reading and the reviewing. I devoured it in one sitting, turning the pages to see what would happen next. I sat down to write about it and it turned into something else altogether.

He clenches the orange plastic pony in the pocket of his sport coat. It is sweaty in his hand. Midsummer, here, is too hot for what he’s wearing. But he has learned to put on a uniform for this purpose; jeans in particular. He takes long strides—a man who walks because he’s got somewhere to be, despite his gimpy foot. Harper Curtis is not a moocher. And time waits for no one. Except when it does.

The girl is sitting cross-legged on the ground, her bare knees white and bony as birds’ skulls, but also grass stained. She looks up at the sound of his boots scrunching on the gravel and broken glass—long enough for him to see that her eyes are brown under that tangle of grubby curls—before she dismisses him and goes back to her business. Harper is disappointed. His personal preference is for blue, the color of the lake, out where it gets deep, where the shoreline disappears and it feels like you’re in the middle of the ocean. Brown is the color of shrimping, when the mud is all churned up in the shallows and you can’t see shit for shit.

“What are you doing?” he asks, putting brightness in his voice. He crouches down beside her in the threadbare grass. “Playing?” Really, he’s never seen a child with such crazy hair. Like she got spun round in her own personal dust devil, one that tossed up the assortment of random junk splayed around her—a cluster of rusty tin cans, a broken bicycle wheel tipped on its side, spokes jabbing outwards. Her attention is focused on a chipped teacup, turned upside down, so that the silvered flowers on the lip disappear into the grass. The handle has broken off, leaving two blunt stumps. “You having a tea party, sweetheart?” he tries again.

“It’s not a tea party,” she mutters into the petal-shaped collar of her checked shirt. Kids with freckles shouldn’t be so earnest, he thinks. It doesn’t suit them.

Rating: How to rate this? I devoured the book in one sitting but do I think this is a GOOD book? Not really, no. So:

4 – Bad but not without some merit

Over at Kirkus: Roses and Rot by Kat Howard