Title: Morning Glories, Vol. 2: All Will Be Free 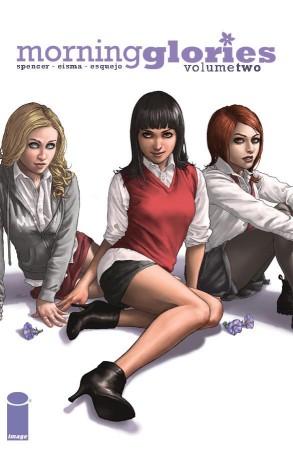 One of the most prestigious prep schools in the country…But behind it’s hallowed doors something sinister and deadly lurks. When six brilliant but troubled new students arrive, they find themselves trapped and desperately seeking answers…and escape from a place where nothing is what it seems to be! Learn the dark secrets of the Glories’ past lives as the mystery of the Academy unfolds.

With this volume each of the six Glories (Zoe, Hunter, Jun, Jade, Ike and Casey) are spotlighted, revealing secrets of their past and questions about their future.

Stand alone or series: Second volume in an ongoing series

Going back to Morning Glory Academy for a second helping on this trippy journey just reinforced the impression I had after reading volume one: I have no clue what is going on and I would not know how to even begin spinning theories. Tentatively, I will throw one out there anyway…time travel?

In this volume, there are six flashback-laden issues focusing on each of the characters: Zoe, Hunter, Jun, Jade, Ike and a new character named Hodge – a teacher who might or might not be on the kids’ side but who the hell knows. On this note, it’s interesting the absence of a Casey-issue – is it because so much of the first volume was dedicated to her?

Each issue follows these characters inside and outside school (and sometimes when they were kids) and much like Lost – I am sorry, this comparison is pretty much inevitable to me – each character shows hidden depths and have buried secrets that none of the others know. And unbeknownst to each other, they also share more than the known mutual fate of being at the academy: each of them has interacted with a shady character named Abraham who seems to be “collecting” these kids since they were much younger. Twist after twist and revelations make the reading of this volume pretty much a riveting rollercoaster ride of unsolved mysteries and dark, edgy revelations. One of the kids is a murderer but does that person have a sound motive for it? one of the kids might not be completely a jerk and be a much more complex figure than their public persona might make us think; another one might be communicating with a future/alternate self; mistaken identities, sexual abuse, memory loss, everything is thrown in the pot here to a degree that the story starts to feel more convoluted than anything else.

It is riveting as you read it but as I sit down to put thoughts on paper, I feel like that there isn’t a lot more to be said about the series than that because 1) one week after I read this volume, I pretty much forgot most of the details and 2) I can’t help but to feel that we are talking about superficial flair – and “darkness” and “edginess” for darkness and edginess’ sake – over any real substance.

Here is my problem with this series so far: I don’t feel like there has been enough progression of anything. Unlike Lost, I don’t feel Morning Glories so far has done a very good job at really developing its characters beyond their superficial selves and without those, it’s hard to keep interest going. I wonder if the type of restricted medium is the best way to tell the type of story this seems to be – I can’t imagine following this story issue by issue on a monthly basis, to be honest and I am not so sure I want to continue reading unless someone tells me I MUST.

Hmm. Ok, I both agree and disagree with Ana.

This second graphic novel collects issues 7-12 of the Morning Glories series, and, as Ana says, it focuses largely on character backstories. The Lost similarities were always big in my mind from the first volume and are only MORE pronounced in this second installment–this collection gives us the backstories and surprising motivations for Zoe, Hunter, Jun, Jade, and Ike…plus, introduces some interesting new faces on the adult side of the spectrum.

What I liked about the first volume remains present in this second graphic novel: there’s a lot of violence and OMGWTFPOLARBEAR moments also abound, combined with talky-talk, hypercompetent, messed-up, hormone-driven teens. It’s fun. I’m not entirely sure where things are going or what the deal is with Morning Glory Academy, but I’m starting to form some theories–and the theory-forming is one of the things I love the most. (Anyone who knows me from Lost and BSG days knows this. Also, my theories are almost always entirely incorrect. That doesn’t matter, though, right?)

So, when Ana says that the story starts to feel more convoluted in this volume, I totally get it and agree. BUT, I also think that the convoluted nature of the story is… well, fun. And I like it a lot. There are a couple of threads running throughout Morning Glories so far: who are these kids and why are they so important to the Academy? Why were they all born on the same day, and why is that important? What is the purpose of the Academy, who are the other kids at the academy, and how do they relate (if at all) to the incoming class? Finally, who the hell are these faculty members and why so murdery?

My theory? Reincarnation, with a little bit of SFF-style looped-universe physics, with a good dash of mythological prophecy thrown in the mix. (I think that Casey et al are reborn generation after generation, that the Morning Glory Academy is some kind of holding cell or prison in some warped sense of the universe, and that everyone is doomed to repeat their Sisyphean task of birth and bloody death until some great task is accomplished, or the stars align in such a way, or something very dramatic and godlike happens. Like I said, though, I’m usually very wrong about these things.)

While the theorizing is fun, what I enjoyed so much about this particular volume is learning about these characters beyond what we already know, and beyond the superficial opinions we’ve formed of them. For example, take Zoe. From Vol. 1, Zoe seems to be a superficial, awfully stereotyped head cheerleader kind of character, with a string of boyfriends, and a screw off attitude (in addition to being a chemistry genius). There are glimpses of empathy in the first book, but for the most part the stereotype reigns. This second collection, however, shows Zoe’s original home as an orphan in Mumbai, then twelve years later as an adopted American teen, her reluctance to date jocks (or apparently anyone)… until something happens. It’s certainly a different side to Zoe, and I loved exploring other characters’s arcs–beyond Casey, who is still a favorite, but for different reasons.

The other story I enjoyed very much? Jun and Hisao. I don’t want to spoil it, but DAMN. That’s a good one. Hunter’s past, his trouble with clocks and time, is also super interesting (in the WTF LOST kind of way), as is Jade’s super-trippy (and sad) ark. And Ike… well, Ike is the least interesting to me, but there’s a development here that will keep me going.

All that is to say: I read this in about 30 minutes, and already I want MORE. If you’re looking for the compulsive, potato-chip type Lost equivalent of a comics binge-read? Morning Glories is your jam.

And now we turn it over to you! Sound off and let us know what you thought of Morning Glories!