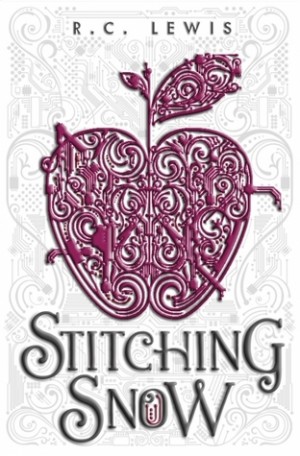 Her home planet is filled with violence and corruption at the hands of King Matthias and his wife as they attempt to punish her captors. The king will stop at nothing to get his beloved daughter back—but that’s assuming she wants to return at all.

Essie has grown used to being cold. Temperatures on the planet Thanda are always sub-zero, and she fills her days with coding and repairs for the seven loyal drones that run the local mines.

When a mysterious young man named Dane crash-lands near her home, Essie agrees to help the pilot repair his ship. But soon she realizes that Dane’s arrival was far from accidental, and she’s pulled into the heart of a war she’s risked everything to avoid. With the galaxy’s future—and her own—in jeopardy, Essie must choose who to trust in a fiery fight for survival.

Why did I read this book: It’s been a year for fairy tale retellings here at Book Smugglers HQ, so when I received an ARC of Stitching Snow – a science fiction retelling of Snow White – I knew I had to give it a try.

Essie has a secret.

Staying alive on backwater mining planet Thanda is no small feat – least of all a teenage girl completely on her own. Alone or not, Essie manages to hobble together a living by her winnings in cage fights and her smarts with her droids and stitched-together tech. For the most part, she’s happy. Or she’s too tired to be happy; call it what you will.

But she’s still got a secret that could, one day, tear the galaxy apart.

That day comes when a strange ship crashes on Thanda, bearing a single pilot – an off-worlder named Dane, with an agenda of his own. Essie reluctantly agrees to help Dane with his ship repairs for the novelty and challenge of the experience, but quickly discovers that Dane is not at all who he appears. With her hidden past and true identity – the long lost heir to the empire, crown princess Snow of Windsong – exposed, Essie must make a choice. To escape her captors and resume her life of anonymity amongst the distant stars, or live up to her late mother’s legacy and do the right thing for her people and the galaxy.

I’m of two minds when it comes to Stitching Snow. The debut novel from R.C. Lewis, this reimagining of the Snow White is fairly fast and loose, but maintains the basic suite of tropes – e.g. there is an heir princess, a power-hungry stepmother, a poisoning of sorts, and a handsome prince. Unlike the Disney version of the tale, however, Stitching Snow places the focus squarely on Snow (that is, Essie in this version): a more active approach on the displaced princess’s perspective and experience. Unlike other traditional iterations of the fable which tend to portray a more passive Snow White, this science fictional version is an engineer and a tinkerer as well as a cage-fighter; she’s also worked hard to keep her identity secret, to stave off the more aggressive men of the mining colony, and maintain her independence. Essie’s characterization is brilliant throughout the book, managing to be tough without being abrasive, and vulnerable without being a pushover. It’s nice to read a levelheaded heroine (especially in YA SFF), who takes calculated risks but understands the importance of pragmatism. I’ve always felt that there’s an element of fear to Snow White – Snow’s terror at being murdered by the huntsman and caught by her stepmother – and in Stitching Snow, Essie’s fear of discovery or of being in a position where she cannot control the situation is a defining, palpable characteristic.

In the vein of pragmatism and tropes, at the onset of Sttching Snow (and indeed for most of the novel), R.C. Lewis does a fantastic job of taking certain key YA paranormal/SFF staples and ever-so-slightly twisting them. There’s the tough-as-nails heroine, for example, who happens to be a (beautiful) escaped princess who is making her way on a rough planet thanks to her mad science skills. She, of course, runs into a questing stranger who is obviously gorgeous, dangerous, and on a secret mission. The two are inevitably involved, romantically, as these things go in the trope-laden world that is softball YA SFF… Except that in Stitching Snow, key things are a little bit different. Essie is NOT head over heels in love with Dane after first setting eyes on him – she does not crave his touch immediately, nor does she romanticize the fact that he abducts her against her will. She’s pissed, she tries to escape, and there aren’t countless pages dedicated to Essie’s fluttering heartbeat every time Dane brushes by her. I appreciate that very much, jaded reader of YA SFF that I am. I liked that it takes time to develop these romantic inclinations between the two characters, and that cheese is (for the most part) kept to a minimum. It’s actually a fascinating exercise – are the tropes ok even if you’ve read them a million times before, or is it the telling that matters? If you change a few key details – the heroine doesn’t instantly fall in love with the hero – does that make the tropes bearable?

In the case of Stitching Snow…yes and no. While I enjoyed the slower building relationships between characters, ultimately these small twists to a very tried and tired trope-laden story still leaves you with a tried and tired trope-laden story. No matter how you cut it, this is still the story of an exceptional, beautiful princess who saves her kingdom with her exceptional, beautiful prince. On the subject of Dane, by the way, it’s incredibly irritating that he’s so much better at Essie at combat and that he gets to teach her how to improve her rough cage-fighting skills (did this bother anyone else?!), which are fine for someone self taught but never an obstacle for him. He’s also a tad too-good-to-be true, and despite the slow-building romance, Dane comes off as a stock, two-dimensional character who is there for requisite plot development points.

And then there are the other important factors in the novel: the overarching conflict, the worldbuilding, the villains and their motivations, and the science fictional aspects of the book with Essie’s tech. See, Essie ran away from home because her mother died, her father is a despotic tyrant king, aided by his new queen – the evil stepmother – who pretends to be a witch, but who really is an accomplished poisoner and at the forefront of technological age-reversal advancement. There’s a larger thread of conflict here throughout the galaxy as the Windsong royals are apparently poisoning parts of the populace, seeding pockets of unrest and chaos to continue a bogus war and maintain power. The theory is interesting, but as it’s never really explored in any depth or with any convincing rationale, I had trouble buying into the premise. Further, the villains in this piece come across as one-note sketches – there’s glimpses of a conflicted relationship between Essie and her father, but it goes nowhere (sadly). Similarly, the pacing of the book is remarkably lopsided, with the first two thirds of the novel solidly restrained, but the last third of the book frantically rushed.

And finally, the science fiction. Essie is an engineer and a tinkerer – she likes taking things apart and putting them back together in better, more creative ways. R.C. Lewis does a good job of building Essie’s character and establishing her competence and smarts, but sadly does the handwavey “this is science stuff, guys” thing by referring to all of Essie’s tinkering as “stitching” (like sewing, with “patches” and loose stitches holding technology together). I can’t help but wish there was something a little more tactile here, instead of a weak analogy to sewing.

Ultimately, Stitching Snow is an OK novel. It’s not the best YA Science Fiction book I’ve ever read, but it’s certainly not the worst. A middle-of-the-pack, moderately entertaining but ultimately forgettable book.