Title: I Don’t Want to Kill You 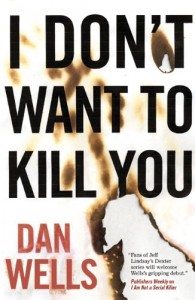 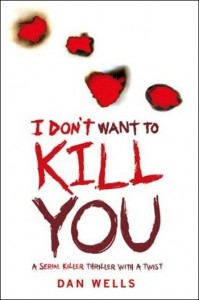 Dan Wells introduced us to John Wayne Cleaver in the chilling novels I Am Not a Serial Killer and Mr. Monster. In I Don’t Want to Kill You, Cleaver faces his toughest challenge yet.

John Wayne Cleaver has called a demon—literally called it on the phone—and challenged it to a fight. He’s faced two monsters already, barely escaping with his life, and now he’s done running; he’s taking the fight to them. As he wades through the town’s darkest secrets, searching for any sign of who the demon might be, one thing becomes all too clear: in a game of cat and mouse with a supernatural killer, you are always the mouse.

In I Am Not a Serial Killer we watched a budding sociopath break every rule he had to save his town from evil. In Mr. Monster we held our breath as he fought madly with himself, struggling to stay in control. Now John Wayne Cleaver has mastered his twisted talents and embraced his role as a killer of killers. I Don’t Want to Kill You brings his story to a thundering climax of suspicion, mayhem, and death.

It’s time to punish the guilty.

And in a town full of secrets, everyone is guilty of something.

Why did I read this book: I’ve read and LOVED the first two books in this series – almost against my better judgment (let’s say I went from skeptic to full-fledged believer). When I received my shiny copy of I Don’t Want to Kill You in the mail, I was ecstatic, as this is one of my most highly anticipated books of the year.

So begins John Wayne Cleaver on his last hunt in I Don’t Want to Kill You. Since discovering that his next door neighbor (a nice, elderly man named Crowley) was actually a murderer and a demonic creature capable of regenerating bodyparts after ingesting them, John’s life purpose has been sharpened, honed to a new direction. In Mr. Monster, America’s favorite teenage sociopath (former serial killer in-training) took down another demon that took to hunting in his small town – an FBI agent with a torturing fetish named Forman, who came to town looking for his old friend Crowley’s killer. John bested Forman too but knows that there inevitably will be more demons coming for him, so he decides to go on the offensive by trying to lure out the demons and put an end to their murderous ways once and for all.

Of course, it’s never quite so simple being a Dark Avenger (just ask Jeff Lindsay’s titular Dexter Morgan). Once John has let his own inner monster out of his carefully constructed cage, there’s no putting him back; the only way to satiate the beast is with the blood of the guilty. In I Don’t Want to Kill You, as John intended, a new killer named Nobody in Forman’s phone comes to town and begins her rampage of death and mutilation. John is ready to let Mr. Monster out again, but the price may be too high.

As I mentioned earlier, I Don’t Want to Kill You was one of my most highly anticipated books of 2011 – I Am Not A Serial Killer was surprisingly awesome, and Mr. Monster only expounded on that awesomeness by unleashing an even darker, more terrifying level of character development [1. Note: Be warned that although John Cleaver is a teenager, this is no Young Adult series.]. In this final novel of the trilogy, I was expecting so very much, and…well, maybe that’s my own bad as a reader with inflated expectations because as much as I wanted it to blow me away, I Don’t Want to Kill You couldn’t quite live up to the darkly fascinating glimmer of its predecessors. That’s not to say I Don’t Want to Kill You is bad – because it’s not. It’s very, very good. It’s just not as good as it could have been, or as good as I had hoped it would have been. It’s the dreaded trilogy curse striking again – finishing a series is a tough thing to do (which is why when someone does it well, it’s awesome).

As with the prior novels, this third book follows a mystery/crime thriller sort of plot – John must figure out who the killer is, find them, and kill them before he (or she) finds and kills John. Unlike the first two books, though, John’s inner turmoil takes a backsteat in I Don’t Want to Kill You, which is unfortunate because this struggle was the main draw of the series for me. I love the tension between John’s nature (his fascination and hunger for death and violence) juxtaposed with his desire to fit in and do the right thing. Everyone that has actually seen John’s true personality (Mr. Monster lurking beneath that facade of normalcy) has either been killed, or deeply frightened. Such is the case with Brooke, John’s next door neighbor and sort-of former girlfriend. In I Don’t Want to Kill You, Brooke still wants nothing to do with John…but oddly enough, one of her friends, the buxom and popular Marci, does. I didn’t really get why Marci had to be introduced as John’s new love interest in this book, especially when it’s clear how hung up he is on Brooke (and how pivotal a role she ultimately will play in John’s life). I guess the relationship angle was meant to give John more of a grounding in empathy and humanity, and I suppose Mr. Wells did a good job building that storyline, and yet, I can’t help but feel like it was something of a cop-out. There was something about I Don’t Want to Kill You that was missing – almost as though the bite and edge that made this series superb was restrained and locked within its own cage, much like John’s alter-ego.

I don’t want to say too much about the plot, because therein lie spoilers, but I felt that this murder mystery/demon identity was also a bit easier to predict than the other books. Again, that’s not to say the plotting is bad or handled poorly (because it’s a great story, wonderfully paced, and I finished the book in a single sitting) – but just lacking that delectable spark of complexity that made the prior books so good.

Ultimately, I felt like I Don’t Want to Kill You was a good book that ties itself up nicely, but left me wanting more. Fortunately, there’s room for more in the future, so perhaps we haven’t seen the last of John Wayne Cleaver? I certainly hope to read more from the talented Dan Wells in the future. (I just hope that wonderfully depraved edge comes back, should there be any further books.)

The phone rang four times before someone picked up.

“Hello,” I said, speaking clearly. I’d muffled the receiver with a sweater to mask my voice, and I wanted to make sure she could understand me. “Is this Mrs.Julie Andelin?”

I smiled. Right to the point. Some of them babbled on forever, and I could barely get a word in edgewise. So many mothers were like that, I’d learned: home alone all day, eager to talk, desperate for a conversation with anyone over the age of three. The last one I’d called had thought I was from the PTA and talked to me for nearly a minute until I had to shout something shocking just to get her attention. This one was playing along.

Of course, what I had to say was pretty shocking regardless.

How will she react?

Once again, right to the point. Almost too practical, perhaps. Is she scared? Is she taking this too calmly? I need to say more.

“You’ll be pleased to know little Jordan walked straight home from day care— past the drugstore, down the street to the old red house, then around the corner and past the apartments and straight home to you. He looked both ways at every street, and he never talked to strangers.”

“Who are you?” Her breathing was heavier now; more scared, more angry. I couldn’t read people very well over the phone, but Mrs. Andelin had been kind enough to answer the phone in the living room, and I could see her through the window. She looked out now, wide eyes peering into the darkness, then quickly wrenched the curtains closed. I smiled. I listened to the air go in and out of her nose, in and out, in and out. “Who are you?” she demanded.

Her fear was real. She wasn’t faking— she was legitimately terrified for her son. Does that mean she’s innocent? Or just a really good liar?

Julie Andelin had worked in the bank for nearly fifteen years, her entire adult life, and last week she had quit. That wasn’t suspicious in itself— people quit jobs all the time, and it didn’t mean anything except that they wanted a new job— butI couldn’t afford to ignore even the smallest lead. I didn’t know what the demons could do, but I’d seen at least one who could kill a person and take its place. Who was to say that this one couldn’t do the same? Maybe Julie Andelin was bored with the bank, but maybe— maybe—she was dead and gone and replaced by something that couldn’t keep up the same routines. A sudden change of lifestyle might be, from a certain point of view, the most suspicious thing in the world.

“What do you want with my son?”

Rating: 7 – Very Good, although Mr. Monster I think remains my favorite book in the trilogy.

Reading Next: Mermaid by Carolyn Turgeon