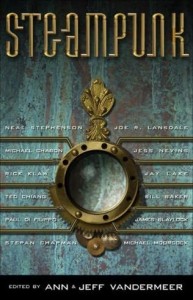 From the editors of The Thackery T. Lambshead Pocket Guide to Eccentric and Discredited Diseases and The New Weird, this is steampunk. Hang on tight.

Why did I read the book: This one is considered THE definitive Steampunk anthology

Steampunk is a collection of articles and stories pertaining to Steampunk. The three articles contained in the anthology seem to have been written specially for the collection whereas the stories have all been published before and are collected here as examples of “Best Of” that the genre has to offer.

I guess the question that needs to be asked is this: does the anthology succeed in its purpose to collect the best of the genre? I am….undecided.

I am not too sure that the unsuspecting reader, the one who never read Steampunk, would come away after reading this collection, wanting to read more. I rather think that the best public for the anthology are those who already enjoy Steampunk and want to know more by exploring the short story format or by reading one of the books that are considered an “Essential” reading. In that sense, I consider myself one of those and I am glad I did read it but I can’t really say I liked the majority of what I read.

The three articles for example are rather good. Introduction: The Nineteenth Century Roots of Steampunk by Jess Nevins is my favorite, an interesting essay about the roots of Steampunk going back to dime novels of the 19th century and the difference between a first “wave” of Steampunk fiction and a second “wave”. The other two are The Steam-Driven Time Machine: A Pop Culture Survey by Rick Claw which offers an insight about genre and its different format (books, movies, fashion, etc) and how the media has picked up on it and The Essential Sequential Steampunk: A Modest Survey of the Genre within the Comic Book Medium by Bill Baker takes a look at the genre within comics and graphic novel format. I do have to say though, as much as the articles are all good, they are not particularly insightful in a ”not to be missed” way. Any information provided and collected can easily be found by doing a simple Google search about the genre.

As for the stories themselves. This is where things get really complicated. Some of them are really, really good but amongst hose there are a couple I am not sure I would even consider Steampunk. Cyperpunk (such Neal Stephenson’s Excerpt from the Third and Last Volume of Tribes of the Pacific Coast) Gaslight Romance, yes. Steampunk? Perhaps not. In any case, admitting that all stories are a form of Steampunk – what do these stories say about the genre?

That there isn’t a clear definition, or a clear parameter to define it. Which is something I already knew but became set in stone after reading the anthology.

My favourite stories in the anthology are the lighter, more fun one ones like Victoria by Paul Di Filippo. Part of his Steampunk Trilogy of novella, this one was a delight to read. It tells the story of a how a scientist is able to genetically modify a newt into a woman with a tremendous sexual appetite. He calls her Victoria and she looks a bit like Queen Victoria. When the real Queen goes missing, the prime minister engages his help to substitute one woman for the other while they search for the queen. It is a great Victorian set story full of political intrigue and scandalous behaviour. The Selene Gardening Society is a whimsical comedy of manners in which a group of Victorian ladies decide to send the excess of garbage to the moon – which will, according to them eventually make the atmosphere habitable for humans. Another favourite but more in a darker streak was Seventy-Two Letters by Ted Chiang applying Kaballa and Gollems to a Steampunk setting. There is also a small except (3 pages or so long) of the very good Warlod of the Air by Michael Moorcock,a book considered to be proto-Steampunk. The excerpt is so small and so obviously part of a larger story that I don’t understand its inclusion in the anthology at all.

The other stories were a complete miss for me. Either because the concepts were not fully explored like Jay Lake’s The God-Clown is Near with the idea of “moral” Clowns and one being built to pass judgment lacks context – it seems to be part of one the author’s “world” but in here it just floats in space. Similarly, The Giving Mouth Ian R. MacLeod, a medieval Steampunk is beautifully written
but also lacking gravitas and a clear explanation for what the heck is going on. A Sun in the Attic by Mary Gentle on the other hand has some of the worst dialogue I ever read even if might have an interesting premise (positive and negative outcome of scientific discoveries in a polygamous society). And so on and so forth, cardboard characters, lack of a cohesive or interesting story afflict the remaining tales.

My least favourite (to put it very mildly) of them all is definitely The Steam Man of the Prairie and the Dark Rider Get Down: A Dime Novel by Joe R. Lansdale. The premise is actually pretty good. The Time Traveller of from H.G. Wells’s The Time Machine travelled so much that he disrupted the time-space continuum and somehow ended up a vampire. Sounds good right? Except the entire story is an excuse for gratuitous violence and an overwhelming obsession with … “ass”. To wit, in every single page there is a scene that contains either rape, impaling, haemorrhoids or ass fu**ing (including a scene where the titular character ass f**ks an ape) all in very graphic details. I am not a prude, I have no problem with the word itself nor am I averse to violence per se if it has a context or a point. But the entire story is completely pointless and by the end of it, I wanted to remove my eyes out of my skull and bleach them.

Ultimately the anthology made me reflect about what my greatest problem with the genre is. I have come to find that Steampunk is a mish-mash of good and bad (like any other genre, really) but above all the most important issue I have is that Steampunk is absolutely great in theory and with its premises but the majority of its execution misses the mark completely. Because it is a genre that lacks a clear definition, I find myself constantly finding stories and books that are defined as Steampunk but which are not. Or in the case of this particular anthology, find that the articles about Steampunk are far more interesting and better than the stories themselves.

This dichotomy between theory x execution and how the former seems to be more of a reality than the latter really is what keeps me going – I want to find more and more examples of good Steampunk execution and shall not rest until I do. Until then, I do not think this one is the “Definitive” Steampunk anthology although it is definitely a good representation of the genre as it currently stands. Take that as you will.

BUT IS IT STEAMPUNK: YES. Some stories do fit what I call Steampunk better but overall yes, definitely a Steampunk collection.

Notable Quotes/ Parts: If I had to pick one story to quote would have to be Victoria. I loved the inside joke the author played with one of most famous (or infamous) art critics of his time, John Ruskin (the man who “discovered” the Pre-Raphaelites) and how he supposedly had a problem with women’s pubic hair (seiro7slyt) and never consummated his marriage to Effie Gray (who later married one of my favourites painters, Millais). The source of his “problem” may well have been Victoria, the newt. Awesome. (yes, I am geek, I KNOW THAT).

Additional Thoughts: For another taste of Steampunk short stories, there is also another anthology currently published: 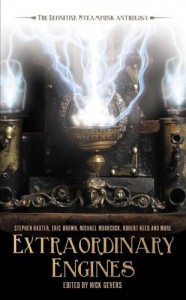 It also seems that Ann and Jeff Vandermeer have another one in the works as we speak.

Verdict: A collection of stories that try to represent the genre, with some hits and a lot of misses. I would only recommended it to the more seasoned Steampunk reader.

Reading Next: Here There Be Monsters by Meljean Brook