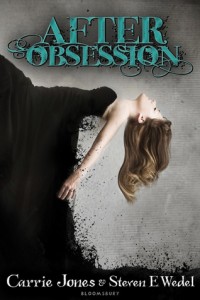 Aimee and Alan have secrets. Both teens have unusual pasts and abilities they prefer to keep hidden. But when they meet each other, in a cold Maine town, they can’t stop their secrets from spilling out. Strange things have been happening lately, and they both feel that something-or someone- is haunting them. They’re wrong. Despite their unusual history and powers, it’s neither Aimee nor Alan who is truly haunted. It’s Alan’s cousin Courtney who, in a desperate plea to find her missing father, has invited a demon into her life-and into her body. Only together can Aimee and Alan exorcise the ghost. And they have to move quickly, before it devours not just Courtney but everything around her.

Filled with heart-pounding romance, paranormal activity, and rich teen characters to love-and introducing an exciting new YA voice, Steven Wedel-this novel is exactly what Carrie Jones fans have been waiting for. Meet your next obsession.

Stand alone or series: Can be read as a stand alone (but with potential for future books in a series)

Why did I read this book: I have mixed feelings towards Carrie Jones’s work. I have read and enjoyed the first two books in her Need series because the actual storylines are fantastic. The only reason I’m behind on finishing Entice is because while I enjoy the storytelling, the actual writing (especially dialogue and characterizations) tends to feel a bit too…simple for my tastes. That said, when I saw After Obsession at BEA this year, I was drawn to the novel because of the dual authors and the promising possession/exorcism/horror-type premise.

Aimee has always been a little different. Beautiful but withdrawn, Aimee has the ability to heal with her touch, and has frightening premonitions when she dreams. Though her gifts run strong, Aimee hides and pushes away her abilities for fear of ending up like her mother, who had similar powers but was consumed by madness, drowning herself in the river. While the loss of her mother leaves a huge hole in her family, Aimee struggles to maintain the balance of normalcy with her younger brother and grandfather while her father works longer and longer hours. Things are even worse when her best friend Courtney’s father is lost at sea, and certainly dead. Courtney is devastated by the loss and hasn’t been acting the same ever since…but Aimee chalks up her strange behavior to grief and does her best to be there for her best friend.

The loss of Courtney’s father throws another pair of lives into a tailspin. Along with his mother, Alan leaves Oklahoma (and a likely athletic scholarship) behind to live with his aunt and cousin Courtney. Frustrated by his new school and its lack of a football team, Alan finds it hard to fit in – especially considering that in this insular New England town, his large frame and strong Navajo features stick out like a sore thumb. Then, Alan begins to notice that something is off about his cousin Courtney and her mood swings – he has his own supernatural gifts, inherited through his Navajo father and ancestors, and he knows that something much more sinister is at hand.

Something is wrong in Goffstown; an ancient evil stirs beneath the glassy surface of its cold river. It is up to Aimee and Alan, with their supernatural abilities, to figure out what is the source of Courtney’s sickness, and how to stop it before it destroys her.

I wasn’t quite sure what to expect when I started this book – the title, cover, and my experience with Carrie Jones’s pixie books suggest paranormal romancey YA. In fact, After Obsession is a good old fashioned small town horror story – complete with requisite creepy Maine township setting, an ancient evil that pervades into said creepy town’s hush-hush history, and even a nasty case of demonic possession (complete with exorcism, naturally). Narrated in alternating chapters following Aimee and Alan’s viewpoints (I’m assuming that Carrie Jones wrote Aimee’s chapters, while Steven Wedel handled Alan’s), After Obsession is executed smoothly, blending both narrative voices nicely while the story builds to its climactic supernatural showdown. I loved the idea of the novel and certain parts of it were effective, spine-tingly fun, including a maleficent spirit hovering by Courtney’s room, physical infestation (Courtney undergoes the usual possession signs of speaking in tongues, displaying supernatural strength, physical deterioration, all that jazz). The ominous figure of the “River Man” is a good a bogeyman as any, and as he situates his insidious agenda on the town, causing people to become violent and cruel, the tension grows.

There was, unfortunately, a level of hokiness to the writing that jars one’s reading experience – especially considering the novel is trying to build an atmosphere of terror and foreboding. Also questionable is how quickly Aimee and Alan reveal their deepest secrets (of their supernatural abilities), and how easily the both of them jump to the “Oh, well it MUST be demonic possession!” conclusion without any real investigation or discussion (i.e. Alan diagnoses Courtney’s demonic affliction after a detailed study of interwebs). I was also not so impressed with how quickly our two protagonists fall in love, or that there was a romance subplot in the first place. It’s so…predictable, isn’t it? Beyond the triteness of our hero and heroine getting all insta-connected and goo-goo eyed at each other, their romance is strangely devoid of any spark. There’s a lot of buildup to a single kiss and for much of the novel Alan is kissing the top of Aimee’s head (which strikes me as familial, not so sexy-timey).

Far more interesting, at least to me, was how these characters were developed individually. While Aimee’s powers are somewhat undefined (other than she can kinda see/dream about future things, and she gets a tingly sensation when she shakes hands and can effectively heal people), I loved her inner turmoil with her mother’s memory. Since her mother shared the same abilities, Aimee fears that if she uses her gifts, she, too, will become “crazy” and suicidal. Through gradually revealed memories and as she learns more about the evil that plagues Courtney, however, Aimee learns that her mother may not have been crazy and suicidal after all. While Aimee is a strong protagonist, it is Alan that steals the show – I loved his struggle to carve out his own cultural and spiritual identity, even though he faces dismissive comments from his (white) mother and jibes from his (also white) classmates. Mr. Wedel, a newcomer to YA fiction, does a fantastic job of nailing Alan’s feelings of anger and alienation, and I appreciated that the novel isn’t afraid to show some of the uglier, more racist elements present (especially in small town, predominantly whitebread America). Never having known his father, Alan still tries to connect with his Navajo father’s heritage, reading books, searching online for information, even performing his own vision quest and receiving a spirit guide. The blend of Alan’s powers with Aimee’s is a well-crafted balance, and I love the inclusion of Navajo myth and legend in After Obsession (especially considering that most possession stories are usually of the white Catholic bend).

All in all, I thoroughly enjoyed After Obsession and look forward to more from the Jones-Wedel writing team – because there’s gotta be a sequel, right? Recommended.

Notable Quotes/Parts: You can check out the Google Preview of the book HERE.

Additional Thoughts: You can check out the official trailer and learn more about After Obsession by visiting Bloomsbury’s Facebook Page.

Courtesy of the publisher, we have one ARC of After Obsession up for grabs! The contest is open to US street addresses ONLY and will run until Saturday, September 17 at 11:59PM (PST). In order to enter, leave a comment here telling us which possession book or film is your favorite. Only one entry per person, please! Multiple comments will be automatically disqualified. Good luck!