Today we are very excited to have Kami Garcia over to talk about her new book, YA paranormal thriller Unbreakable. The first book in a planned series, Unbreakable is Kami’s second solo novel effort (she’s also one of the authors behind the Beautiful Creatures books – recently adapted to film). 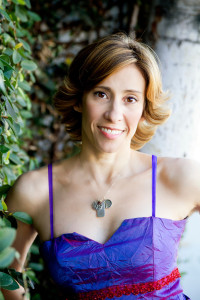 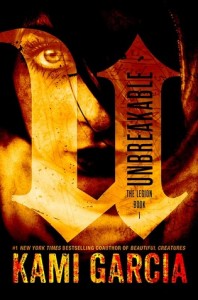 Please give a warm welcome to Kami Garcia, folks!

Everything I write begins with an inspiration board that I fill with photos, quotes, and song lyrics that evoke the spirit of the project. Before I had an office, Pinterest served as my virtual inspiration board. But I’m a tactile person, and one of the things I love to do is spread the images all over the floor and move them around to create settings or moods that correspond to different elements of my universe. In my new office, I currently have an entire wall covered with photos, charms, poetry, and quotes related to Unbreakable—the first book in my new series, the Legion. Whenever I feel stuck while writing, all I have to do is stand in front of that wall, or play around with the stack of photos waiting to be added, and something will come to me.

Research fuels my writing in an equally important way. It’s easier for readers to suspend disbelief if fantasy is mixed with facts. So I create a foundation that includes an aspect of history, science, etc., before I add my fictional elements. For example, in Unbreakable, I created a fictional secret society called the Legion of the Black Dove. But I researched dozens of real secret societies first, and I chose one of them—the Illuminati—as one of the opposing forces in the series. I also spent a lot of time researching real haunted places and ghost hunting, including the procedures and equipment ghost hunters use in their investigations. I’m too superstitious to venture inside a haunted house myself, but I did stand outside several of them, including Lilburn Mansion, which appears in the book, and Georgetown University, where the story opens.

Art and music have always been huge influences in my life and my writing. In college, I was a Fine Arts major for a while, and I was a painter for years. Kennedy, the protagonist in Unbreakable, is also an artist. I wasn’t intentionally trying to pattern her after me; that aspect grew out of her character. Kennedy keeps her feelings bottled up inside, and art felt like a natural way for a person like that to express herself. I admit that it also gave me the opportunity to mention a few of my favorite paintings, one of which—Chris Berens’ “Lady Day”—took on a life of its own in the novel. The music references in Unbreakable are even more prominent. I don’t listen to music while I write. I wear huge, noise cancelling headphones, because I need complete silence so I can hear the characters talking. But before and after I write, I listen to tons of music. It’s another way to get into the mindset of a character or the mood of a scene. Music says a lot about people, and for me, it helps define my characters.

The topics I research create layers in the story that I wouldn’t have imagined otherwise. For example, in the Legion, each of the characters has an area of expertise in which he or she excels. One of my characters, Priest, designs and modifies all the weapons the Legion uses to exorcise spirits. I would not have come up with that if I hadn’t learned about ghost hunting equipment and the science behind it. As a person with no mathematical skills whatsoever, I found myself drawing diagrams of modified paintball guns, and tools from the hardware store that could be transformed into ghost hunting weapons. As a bonus, I learned how to make a metal detector out of a transistor radio, a calculator, and duct tape! 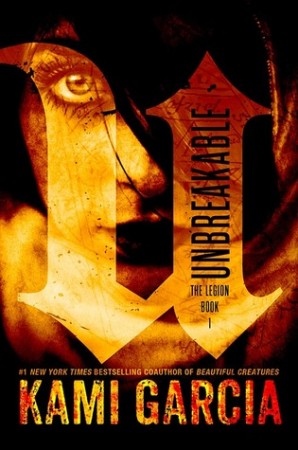 I never believed in ghosts. Until one tried to kill me.

When Kennedy Waters finds her mother dead, her world begins to unravel. She doesn’t know that paranormal forces in a much darker world are the ones pulling the strings. Not until identical twins Jared and Lukas Lockhart break into Kennedy’s room and destroy a dangerous spirit sent to kill her. The brothers reveal that her mother was part of an ancient secret society responsible for protecting the world from a vengeful demon — a society whose five members were all murdered on the same night.

Now Kennedy has to take her mother’s place in the Legion if she wants to uncover the truth and stay alive. Along with new Legion members Priest and Alara, the teens race to find the only weapon that might be able to destroy the demon — battling the deadly spirits he controls every step of the way.

Suspense, romance, and the paranormal meet in this chilling urban fantasy, the first book in a new series from Kami Garcia, bestselling coauthor of the Beautiful Creatures novels.

Kami Garcia is the #1 New York Times & international bestselling coauthor of the Beautiful Creatures Series and the author of UNBREAKABLE, the first book in the Legion Series, releasing on October 1, 2013. Kami is fascinated by the paranormal, and she’s very superstitious. When she isn’t writing, she can usually be found watching disaster movies, listening to Soundgarden, or drinking Diet Coke. She lives in Maryland with her family, and their dogs Spike and Oz (named after characters from the TV show Buffy the Vampire Slayer).

Find out more about Kami and the Legion series at www.kamigarcia.com and www.thelegionseries.com, and follow her on Twitter @kamigarcia.

We have one copy of Unbreakable up for grabs! The contest is open to all and will run until Sunday October 13 at 12:01am EST. To enter, use the form below.