Echo is a novel of great ambition, with four historical settings, different characters and stories in a planned symphony that doesn’t quite sound perfect when it all comes together in the end. 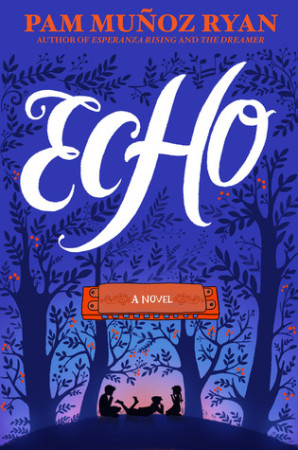 Lost and alone in a forbidden forest, Otto meets three mysterious sisters and suddenly finds himself entwined in a puzzling quest involving a prophecy, a promise, and a harmonica.

Decades later, Friedrich in Germany, Mike in Pennsylvania, and Ivy in California each, in turn, become interwoven when the very same harmonica lands in their lives. All the children face daunting challenges: rescuing a father, protecting a brother, holding a family together. And ultimately, pulled by the invisible thread of destiny, their suspenseful solo stories converge in an orchestral crescendo.

Richly imagined and masterfully crafted, ECHO pushes the boundaries of genre and form, and shows us what is possible in how we tell stories. The result is an impassioned, uplifting, and virtuosi tour de force that will resound in your heart long after the last note has been struck.

Why did I read this book: I was browsing at Barnes & Noble and came across this book and was struck by how beautiful the cover was – I had not heard of it, or seen any reviews to that point. Then I read the blurb and saw that the author was an award-winning Hispanic author and that made me all the more curious.

It opens with a young boy named Otto as he gets lost in the woods near his house. Alone and scared, Otto meets three sisters who have been cursed to roam the forest until a time comes where they are freed to return to their family. The next morning Otto is rescued and his memory of that encounter on that fabled night soon fades….and all that remains is a mysterious prophecy and a harmonica.

Decades later in Germany, Friedrich is a young German boy whose scarred face sets him apart – and on the wrong size of a Nazi party that worships perfection. A lover of music who dreams of one day becoming a conductor, Friedrich finds a harmonica marked with an M and which sounds like nothing else he heard before. The beautiful music inspires him and gives him the strength to help his father in a time of desperate need.

The same harmonica reaches a couple of orphaned brothers a few years later in America. Budding pianist Mike and his brother Frankie dream of being adopted by a loving family – but who would want nearly grown kids? Hope comes in the form of an aloof, rich lady who insists on adopting one musically-inclined child but will her heart have room for two kids?

In the early 40s, Ivy Lopez is a young girl who struggles with her family’s decision to move away to California, taking her away from everything she has ever known. But with her brother away fighting in the War, Ivy is the only one who can keep her family together. But life in California proves to be even harder with news of Japanese internment camps and her school’s refusal to recognise Ivy’s family as American. Her harmonica is but the first instrument she will ever learn to love.

Separated by their location and by time and yet united in their love for their family and for music, the three kids face challenges and hurdles in their path to adulthood with the echo of Otto’s story faintly following them around.

Echo is a novel of great ambition, with four historical settings, different characters and stories in a planned symphony that doesn’t quite sound perfect when it all comes together in the end. It has beautiful individual elements: each separate part and their historical backgrounds have been expertly researched and written well. This is especially true when it comes to the early 30s Germany of Friedrich’s story with its hostile environment that fosters enmity between neighbours and family members in a growing culture of fear; as well as to Ivy Lopez’s California in the 40s in the middle of a similar situation in the US where Americans of Mexican and Japanese ancestry are met with suspicion and racism. There is a great tension, sadness and overwhelming sense of injustice in both Friedrich and Ivy’s stories.

However, these parts don’t exist on their own as they are fragments of a greater landscape that started with Otto’s story all those years ago in the woods of a German town. It is with sadness that I say that I felt underwhelmed when the time came to wrap it all up. The reason is twofold: each individual story following these characters end on a cliff-hanger. Those felt forced and emotionally manipulative and then those cliff-hangers resume in the future as each kid, now adults, reminisce in clumsy expository mode removing any sense of emotional connection. The other reason is the way that the overall story connects with the Otto’s story and the terrible curse of the three sisters, to wit: not that well. The fantastical elements, so important to start with, were faint and even, one could argue, nonsensical to a point where I had to ask why where they there at all.

Echo in fact, works much better as a pure historical piece since the fantastical elements that book end the novel do not come together seamlessly with the larger part of the narrative. In spite of that, there is a lot to recommend in Echo and I was glad to finally read something from prolific (and multiple award-winner) writer Pam Muñoz Ryan.