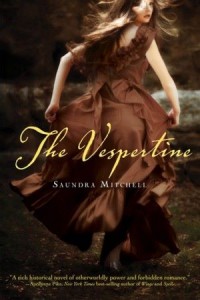 Stand alone or series: Stand alone but with a companion novel to be published in
2012

It’s the summer of 1889, and Amelia van den Broek is new to Baltimore and eager to take in all the pleasures the city has to offer. But her gaiety is interrupted by disturbing, dreamlike visions she has only at sunset—visions that offer glimpses of the future. Soon, friends and strangers alike call on Amelia to hear her prophecies. However, a forbidden romance with Nathaniel, an artist, threatens the new life Amelia is building in Baltimore. This enigmatic young man is keeping secrets of his own—still, Amelia finds herself irrepressibly drawn to him. When one of her darkest visions comes to pass, Amelia’s world is thrown into chaos. And those around her begin to wonder if she’s not the seer of dark portents, but the cause.

How did I get this book: Review copy from Netgalley.com

Why did I read this book: I recently read and loved this author’s first book, Shadowed Summer, reviewed HERE.

I woke in Oakhaven, entirely ruined.

Thus begins The Vespertine, the tale of young Amelia van den Broek and her ruination. In the summer of 1889, Amelia is sent by her brother to Baltimore to stay with her cousin Zora and her parents to enjoy one season in order to secure a husband and a future. As a member of a middle class, Amelia doesn’t have a lot of prospects and must at all costs follow the strict rules of society. But things don’t go exactly according to plan because as soon as she arrives in Baltimore, she starts to develop the second sight, dream-like visions of the future that appear only at sunset, and given the current séance fad, she soon becomes famous as a sought-after mystic. If that wasn’t enough to start the rumour mill, Amelia is irrevocably attracted to the young, poor, completely unsuitable painter Nathaniel. Then her visions start to come true and tragedy strikes.

I recently read Saundra Mitchell’s first book, Shadowed Summer and was thoroughly impressed with the story and her writing which made me look forward to The Vespertine. And I really enjoyed it albeit not as much as her previous book. It does have a lot going for it:

The setting is one I hardly see in YA (or any other genre I read): Baltimore, turn of the century, dealing with a middle class that has little in terms of power and money and a lot to lose should one (read it: a girl) be ruined before securing a suitable husband. The book starts with the main character already ruined, back to her brother’s house, living as a cast-off, close to a mental breakdown due to her terrible visions. It alternates between now and the summer when everything happened. The point is, hardly do I ever read such a story, of a properly ruined character, as usually when reading historical YA or Romance, the main character is on the brink of ruination only to be rescued at the eleventh hour. Which is ok, of course, but it was mighty interesting to read about the other side and follow the path that led Amelia to it. And that is the greatest strength of The Vespertine: its main character, her struggle between being a “good, proper” girl or a “wicked” girl that followed her own mind, her own wants, despite the possible repercussions. She also doesn’t disguise the fact she loves the attention that she gets when seeing the future. She is aware of the threat of ruination, she fears it which means that she is not disconnected from her own time. At the same time though, it is easy to see how young, innocent and reckless Amelia really is when finally things come to an end. That to me, makes her a flawed, interesting, believable character. I really liked this passage because it sets firmly in my mind that she also had a choice and choose she did:

I no longer cared that I couldn’t be a good, quiet girl, satisfied with a comfortable life and a pleasant-enough husband. It hardly mattered that I was ruined and alone. For one sunlit season, I had laughed and I had loved and I had been extraordinary. It was a glorious ruination – my madness was mine – and for that, I was not sorry.

The other element that I really enjoyed about the novel is the Gothic feel that it has which is present not only in the paranormal side of the story but also in the writing, in the portentous build up to the climax and the exaggerated way that feelings were described, especially those surrounding the romance between Amelia and Nathaniel. I am not usually a fan of the insta-love or insta-attraction (which is what happens between Amelia and Nathaniel) although I have to admit that it fits with this particular story in this particular genre. On the flip side, Nathaniel is not really well-developed beyond that Dark!Mysterious!Dangerous stereotype that seems to be the end and beginning of a lot of male characters in the paranormal field. I find it regretful that I never really bought their love story, I never felt it truly progressed from lust to love unlike the love story between two secondary characters – perhaps that was the point: the comparison, the juxtaposition between a no holds barred Gothic love story and one that follows the parameters of the time. It will be interesting to hear other opinions about it.

Plus, and I know this will probably sound silly, since we are talking about a protagonist who can predict the future, setting the novel firmly in the paranormal camp, but there is a second paranormal element that came sort out of left field and didn’t make a lot of sense to me nor was it developed enough to actually be interesting or feel like a necessary part of the story.

Finally, my main problem with the book is how uneven it reads. Slow to start with and then when things start happening, they happen fast and in a matter of few pages it is all over which is a shame because some truly shocking, horrible things happen and I had hardly any time to digest it all before being thrown into what I feel is a disappointing ending.[1. SPOILER ALERT: it is a happy ending and who would have thought that I would ever dislike that? But unfortunately, it felt forced. UNLESS Amelia is crazier than I ever thought. In which case, then the ending is awesome]

Even though parts of The Vespertine did not work for me, given the strength of its good parts and how much I loved Shadowed Summer the author has definitely become an auto-buy. I hear that there will be a companion novel to The Vespertine called The Springsweet set in the wild west and I can not wait for it.

Narrow row houses shone with white marble steps; the streets swelled with splashes of color – riotous silk gowns and cheerful vests cut in shades of earth and grass and sky. Children darted in front of our wheels, but miraculously survived their own derring-do, girls and boys alike. So many songs slipped into my ears – the call of Arabers, the shouts of newspapers boys, and delightfully, oddly, someone playing a pianoforte. Somehow this struck me all as a daydream a mythological fantasia too great to be real. Ll my life i’d live on our cliff, looking down on a fishing village so small, I could raise my thumb to cover it. A season in town had been beyond my imagination. This great chaos and cry, smelling of sea and smoke and open ground – this was a city. My heart beat with it. My thoughts roared with it! With another crips bite of apple, I tasted – perhaps for the first time – the true sweetness of possibillity.