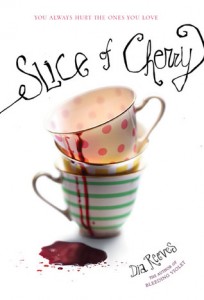 Kit and Fancy Cordelle are sisters of the best kind: best friends, best confidantes, and best accomplices. The daughters of the infamous Bonesaw Killer, Kit and Fancy are used to feeling like outsiders, and that’s just the way they like it. But in Portero, where the weird and wild run rampant, the Cordelle sisters are hardly the oddest or most dangerous creatures around.

It’s no surprise when Kit and Fancy start to give in to their deepest desire—the desire to kill. What starts as a fascination with slicing open and stitching up quickly spirals into a gratifying murder spree. Of course, the sisters aren’t killing just anyone, only the people who truly deserve it. But the girls have learned from the mistakes of their father, and know that a shred of evidence could get them caught. So when Fancy stumbles upon a mysterious and invisible doorway to another world, she opens a door to endless possibilities…

Stand alone or series: Can be read as a stand alone novel, but the second book in the Portero universe (following Bleeding Violet).

How did I get this book: ARCs from the publisher/author

Why did I read this book: Ana was enamored with Bleeding Violet, the first book in this universe published last year (it even made her top 10 books of 2010). After reading Ana’s emphatic praise, I just HAD to read the book too, and I found it rather tasty. Naturally, we both were very excited for Slice of Cherry (even though it took me a ridiculously long time to actually get around to reading it).

Happiness is a bloody knife.

At least, it is for Fancy and Kit Cordelle, daughters of the infamous Bonesaw Killer who hacked up over a dozen victims in his home’s cellar before being caught red-handed and sent to prison. The Cordelle sisters keep to themselves, regarded as pariahs in their small hometown of Portero, which suits them just fine. The summer Fancy turns fifteen, however, she and her older sister Kit are forced to interact with others when they attend Juneteenth at Cherry Glade – a ritual for young Porterenes, as they are granted one wish. With her wish, Fancy is finally handed the opportunity to give in to her darkest urges and show everyone just how deep Cordelle blood runs. From squirrels and small animals, Fancy and Kit move on killing to humans, but only those bad men and women that truly deserve their wrath. With Fancy’s gift for opening doors and Kit’s charisma and bloodlust, the sisters soon find themselves the proprietors of a well-renowned business in Portero, even earning the respect and gratitude of their fellow Porterenes. But even as the sisters relish in their killings, they also begin to drift apart and grow up…

Holy moly. I went into this book expecting to be thoroughly engrossed and entertained based on my previous experience with Bleeding Violet, but I wasn’t expecting to come away from the book liking it even more than its predecessor. Slice of Cherry takes the twisted world of Portero and exposes an even darker side of its inhabitants through the eyes of sisters Fancy and Kit. I am quite comfortable in saying that this is what I felt was missing from Bleeding Violet. Slice of Cherry is earnestly macabre, with razor-sharp characterizations in a sugar-sweet coat of moral ambiguity. This is what so-called paranormal or “edgy” YA should aspire to, because there is nothing mundane about this delectable novel from the very talented Ms. Reeves.

Portero is a strange place, where monsters lurk at night, corpses are mundane, and special doors can be opened to other worlds. As introduced in Bleeding Violet, Slice of Cherry expounds upon Portero’s uniqueness, as Fancy is able to create worlds of her own in order to keep herself and the ones she loves safe, or at least from meeting her father’s fate. While the world is familiar (and thoroughly awesome), the thing that truly sets apart Slice of Cherry is its characters. Fancy and Kit are what we “transies” would call sociopaths. Psychotic sociopaths. They suffer from Dexter Morgan syndrome, in that they feel compelled to kill in order to fill an emptiness within, and though they try to only kill those that deserve it (a wicked control freak slowly poisoning her younger sister, an abusive stepfather, a jealous and murder-scheming dancer), they don’t exactly have a sense of morality; they will kill anyone if it pleases them (but then again, this is Portero we are talking about and everyone is a little off-kilter and plays by their own set of rules). Fine, you say. There are a number of books about teenage sociopaths. What makes these two girls any different?

What defines Fancy and Kit is their relationship with each other and the outside world. These two characters are so bizarre, so twisted and removed from any normal semblance of rational human behavior, that their story is immediately believable and not at all cliched (at least, not in this reader’s opinion). There is a level of complete unreliability with Fancy as our protagonist, as she insists that she and her older sister Kit are “practically the same person” – when nothing could be further from the truth. While Kit is charming, loquacious, and the center of attention, Fancy is taciturn and silent, resenting everything and everyone. When Kit becomes more interested in men than her younger sister, their relationship is sorely tested because even though we readers are never force fed background information about what made Kit and Fancy the way they are, it’s clear that Fancy resists change of any kind (even to the point where she wears little girl dresses that cannot fit her changing body), and that she sees her father’s arrest, Madda’s overtime work, and Kit’s falling in love as abandonment. I loved this tension within Fancy’s narration, her frustration and inability to process the changes that occur within and without her. At the same time, Kit’s characterization begins as the dangerous, impulsive and irresponsible one, but over the course of the book it’s clear that Kit’s grip on reality is far more sturdy than Fancy’s. If you ask me, Fancy is the girl to be afraid of. Take this first scene, for example:

Fancy looked him in his eyes until he stopped babbling and really focused on her, really saw her. When he was quiet she said:

“Daddy’s locked up, so we never see him. Madda had to start working twelve-hour shifts to support us, so we never see her, either. If Kit kills you, they’ll lock her up too, and then I won’t have anybody. That’s the only reason you’re alive. Because if I thought I could do it and not get busted, I’d kill you myself.”

Fancy looked away from the prowler’s horrified stare and finished threading the needle.

“I’m the Bonesaw Killer’s daughter,” she whispered, almost to herself. “Why would you ever think I was good?”

The relationship between sisters, especially sisters of a close age, is always fraught with hardship and tensions, even when you throw murderous tendencies and unbridled psychopathy to the mix. As Kit says to Fancy, it’s easy to show a boyfriend how much you love him, but showing a sister is much harder. Just as Bleeding Violet is a character-centric story, so too is Slice of Cherry. It is the coming of age of these two sisters, Fancy in particular, that makes this book so memorable.

That’s not to say the other elements are any less well-written! As always, Ms. Reeves’ prose is dreamlike, strange, and bewitching as she effortlessly tells a story about some rather gory and unsavory subjects in a deceptively blase manner. Be warned that Slice of Cherry is not for the faint of heart as there are numerous disturbing scenes. If you’re looking for an uncomplicated, black-and-white moral story, you’re probably not gonna like Fancy and Kit very much. If you’re looking for traditionalism, or a nicely packaged, formulaic romp, look elsewhere.

But, if you, like me, delight in the absurd and the grotesque; if you’ve ever felt like you just don’t quite adhere to the tastes of the norm; if you like complicated and darkness…well, you might wanna cut yourself off a Slice of Cherry.

Fancy only allowed three people in the whole world to get close to her: Daddy, who was on death row; Madda, who was working the graveyard shift; and Kit, who was dead to the world in the bed next to hers. And so when she awoke to find a prowler hanging over her, violating her personal space, her first instinct was to jab her dream-diary pencil into his eye.

But even in the dark of night with a stranger in her room, Fancy wasn’t one to behave rashly. Daddy had been rash, and now he was going to be killed. No, Fancy would be calm and think of a nonlethal way to teach the prowler why it was important not to disturb a young girl in her bed late at night.

She breathed in the yellow smell of the prowler’s beery exhalations. He was panting, as though from nervousness or excitement. The heat of his hand whispered across Fancy’s cheek, and she felt a tug on her scalp. A pair of scissors flashed in the dark, and then a lock of Fancy’s hair fell against her half-closed eyes, much shorter than it had been.

As soon as the prowler turned his attention toward Kit in the next bed, Fancy slipped quietly to the floor.

Because Fancy and her sister slept in the sleeping porch at the back of the house, a room with screens instead of proper walls, they relied on numerous paperweights to keep their papers from scattering in the constant breeze. Fancy plucked one such paperweight from the desk at the far end of the room, her eyes never leaving the prowler’s back.

While he hung vampirically over her sister’s sleeping form, Fancy crept closer, the paperweight cocked back, cool, smooth, and heavy in her hand, the prowler’s head growing larger in her sight. But before she could swing her fist forward, the prowler screamed and staggered backward, pinwheeling past Fancy and then crashing into the vanity.

The light clicked on. Fancy blinked in the glare and dropped the paperweight; she heard it rolling away. The light brought her back to herself, back to reality—the white summer linens on the beds; the broken-spined medical books along the only real wall, behind Fancy; the old black phonograph near the tea table. The jars full of various animal organs lining the shelves.

The prowler was the only unfamiliar thing, harmless and weaponless now that his scissors lay abandoned on the floor between the sisters’ beds. He sprawled before the vanity, paper white, young, and sweaty; the golden hilt of Kit’s switchblade curled ornately from his side like a strange doorknob to another world.

“Help!” he screamed, his hands fluttering over the hilt of the switchblade, afraid to pull it out.

Kit, in her pink satin slip, knelt beside the prowler, as awake and merry as if she’d been dancing all night. “Who you yelling for, Buttercup?” she asked with her usual zeal, despite the late hour and odd circumstances. “Nobody here but Fancy and me.”

Rating: 8 – Excellent, and totally on my list of notable, favorite reads of 2011

Reading Next: Wildefire by Karsten Knight