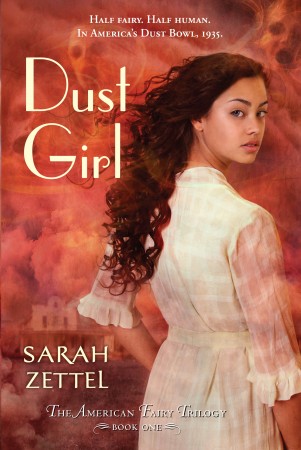 Callie LeRoux lives in Slow Run, Kansas, helping her mother run their small hotel and trying not to think about the father she’s never met. Lately all of her energy is spent battling the constant storms plaguing the Dust Bowl and their effects on her health. Callie is left alone when her mother goes missing in a dust storm. Her only hope comes from a mysterious man offering a few clues about her destiny and the path she must take to find her parents in “the golden hills of the west”: California.

Along the way she meets Jack, a young hobo boy who is happy to keep her company—there are dangerous, desperate people at every turn. And there’s also an otherworldly threat to Callie. Warring fae factions, attached to the creative communities of American society, are very much aware of the role this half-mortal, half-fae teenage girl plays in their fate.

Stand alone or series: Book 1 of the American Fairy Trilogy

Why did I read this book: I’ve heard nothing but praise for this series, and even had a NetGalley e-ARC back in the day. But… for whatever reason, I never actually picked up this book and read it. This holiday season, I decided to change all that.

Calliope LeRoux is dying a little every day. It is Kansas at the zenith of the great Dust Bowl, and relentless storms of dirt fill Callie’s lungs with every half-gasped breath. Callie knows that she and her mother must leave their home and business, the (long guest-less) Imperial Hotel in Slow Run, before it’s too late – most of their fellow townsfolk have already picked up and headed west. But Callie’s mama refuses to abandon their home, clinging to the belief that her husband, Callie’s father, is coming back to them.

One quiet Sunday, however, all that changes.

For the first time ever, her mother asks Callie to play her daddy’s piano and call him home. And, when Callie touches those keys for the first time, she feels something like magic in her bones. Her music calls up the worst storm Kansas has ever seen – a duster that whisks away Callie’s mama, and brings nothing but trouble in its wake. It turns out, Callie’s father was no ordinary man, and Callie is no ordinary girl – her music has drawn the attention of very powerful magical creatures, who will stop at nothing to capture and bend her to their own ends. With the help of her friend Jack, it is up to Callie to survive the dust, to unravel the mystery of her family secrets, and keep ahead of the magical forces hot on her trail.

Well, WOW. Why didn’t anyone tell me Dust Girl was so good?! This book is GOOD, people. Really, really good. I’ll come out and say it up front: I loved this book.

The first in the American Fairy trilogy from amazingly prolific SFF author Sarah Zettel, Dust Girl is an intoxicating blend of historical American Depression-era fiction, coming-of-age story, and unexpected fey-centric fantasy. The juxtaposition of the historical era – which is written exceptionally well, by the way, more on that in a bit – with the Seelie and Unseelie Courts of the fey is unexpected, original, and fantastic. As with werewolves, vampires, and even zombies to some extent(!!), I’m a little tired of reading the same old paranormal creatures in contemporary or traditional historical environments – this goes for the fey as well. I’ve read and enjoyed plenty of books featuring the fair folk, from Patricia Briggs to Juliet Marillier – but there’s some fey fatigue on my side (if you’re anything like me, you may also be a little burned out on fairies).

Dust Girl, however, is the perfect antidote to such fatigue in large part because of its unexpected setting, with the fey in the Depression Era Midwest. The usual fey rules apply (don’t eat the food, iron is bad), but there are plenty of unique tweaks, too – for example, Callie’s ability to feel wishes to work her magic is pretty neat. Most importantly, I loved the very different interpretation of the Seelie and Unseelie courts in this book – particularly the inversion of the traditional roles. In Dust Girl, the frightening fey are the Shining Ones (who may look beautiful at first, but are terrifying beneath – I’m talking ravenous locust families, zombie-bigots, and bloody-nailed theater usher girls). Not to say that the Unseelie aren’t frightening too – in particular, a danceathon at the end of the book is plenty terrifying – but I love that the focus here is on Callie and her heritage. And, while the western European interpretation of the fey might be the focus of this book, it’s worth noting that the novel also draws on Native American mythology, and all of the magic has been molded to the historical era. It’s pretty awesome.

Speaking of awesome, the real reason why Dust Girl shines is because of its heroine, Calliope LeRoux. Callie is an amazing character, one whose main source of internal conflict is her struggle to bridge two very different worlds. Of course, here’s the obvious, fantastical struggle in that Callie is half-human and half-fey – not just any fey, mind you, but the daughter of the missing Unseelie Prince. But truly, it is Callie’s struggle as a mixed race young woman that is so captivating, and elevates Dust Girl to a whole new level of awesome. You see, although you would NEVER know it from the original hardcover jacket for the book, Callie is actually half-Caucasian and half-Black. From the very start of the book, one of the most painful things about Callie’s narrative is her fear of not passing as white, how she tries to tame her hair and take care to stay out of the sun for fear of her skin becoming too brown. As Callie and her friend Jack leave Slow Run and make their way to larger cities, the discrimination she faces and fears becomes even more glaring – racism and xenophobia are in full force in this time period, as is a pervasive fear of “hobos” and the poor. Zettel doesn’t shy away from any of these issues, as the historical detail and the conflicts that Callie and Jack face are truly terrifying and sadly real. (There’s a scene in a rail yard that is particularly horrific, as well as a scene in which an Unseelie named Shimmy applies glamour to Callie and Jack to get into a hotel.)

Overall? This book is truly amazing and I loved every second of it. I immediately purchased Golden Girl (book 2) as soon as I finished Dust Girl and you bet I’ll be reading it very soon.

If you’re a fan of historical fantasy (especially of the Americana persuasion), looking for a decidedly refreshing take on the fey, or if you’re a fan of The Boneshaker or The Broken Lands by Kate Milford, you MUST read this book. Immediately.

“Nothing,” I said. “But if you’re a Jacob Hollander, shouldn’t we be callin’ you Jake?”

“Sometimes it’s not so good for people to find out what you really are.” Jack crumpled the sandwich wrappers together and stuffed them into one of the stacks. “Like, for instance, are you really a Negro?” he asked without looking at me. I’d known that was coming. But my answer didn’t have such a straight road to travel.

“I think my papa had brown skin, but he was a fairy too, so I don’t rightly know what I am.”

Jack was quiet for a minute. “Well, from what I seen so far, being a Callie LeRoux is plenty good enough. Maybe you should just stick to that.”

Additional Thoughts: A mandatory statement about the cover. Initially, when the book was published in hardcover, this was the cover image: 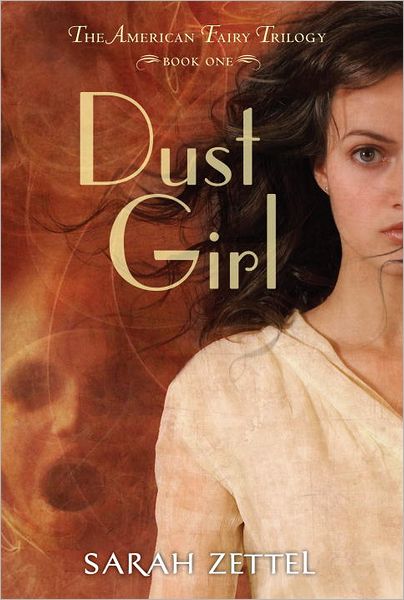 To me, this is whitewashed like nobody’s business. Callie is half-Caucasian and half-Black, and a tremendous part of the struggle she faces in the book regards her appearance – how she tries to pass for white, how her mother tries to protect her from the laws and bigotry of the time, and how Callie’s dark skin is cause for scrutiny and fear. The paperback edition (in my opinion) fixes this serious issue.

Still – it’s worth bringing up. And I’m really incredibly saddened and frustrated that this happened at ALL, especially considering how wonderful a book this is.