The Monstrumologist books by Rick Yancey are amongst Thea’s current favorite series – she absolutely loved these two books – so when we were offered copies to giveaway here, we were more than happy to accept so that we could spread the luuuurve. 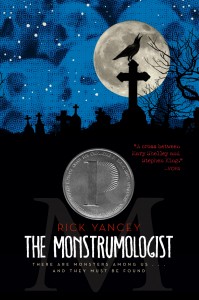 These are the secrets I have kept. This is the trust I never betrayed. But he is dead now and has been for nearly ninety years, the one who gave me his trust, the one for whom I kept these secrets. The one who saved me . . . and the one who cursed me.

So starts the diary of Will Henry, orphan and assistant to a doctor with a most unusual specialty: monster hunting. In the short time he has lived with the doctor, Will has grown accustomed to his late night callers and dangerous business. But when one visitor comes with the body of a young girl and the monster that was eating her, Will’s world is about to change forever. The doctor has discovered a baby Anthropophagus—a headless monster that feeds through a mouth in its chest—and it signals a growing number of Anthropophagi. Now, Will and the doctor must face the horror threatening to overtake and consume our world before it is too late.

The Curse of the Wendigo: 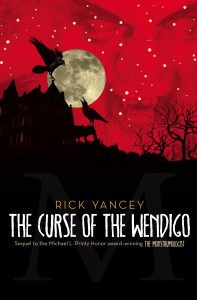 While attempting to disprove that Homo vampiris, the vampire, could exist, Dr. Warthrop is asked by his former fiancé to rescue her husband from the Wendigo, a creature that starves even as it gorges itself on human flesh, which has snatched him in the Canadian wilderness. Although Warthrop also considers the Wendigo to be fictitious, he relents and rescues her husband from death and starvation, and then sees the man transform into a Wendigo. Can the doctor and Will Henry hunt down the ultimate predator, who, like the legendary vampire, is neither living nor dead, whose hunger for human flesh is never satisfied? This second book in The Monstrumologist series explores the line between myth and reality, love and hate, genius and madness.

You can read more about the books at the series’ website or check out this great post by Rick Yancey about Inspirations and Influences.

Two winners get to take home a copy of The Monstrumologist AND a copy The Curse of the Wendigo. The contest is open to participants with a United States mailing address only (international readers can enter if they have a friend in the States who can accept their prizes by mail) and will run until Saturday, November 20, 2010 at 11:59 PM (PST). In order to enter, all you have to do is leave a comment here. Only ONE comment per person, please! Multiple entries and/or duplicate comments will be automatically disqualified. Good luck!