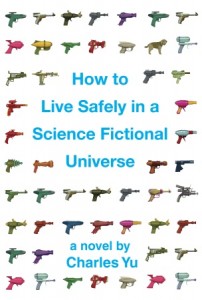 Title: How to Live Safely in a Science Fictional Universe

How did I get the book ARC from Corvus

Charles Yu is a time machine repairman in science fictional Minor Universe 31. He lives in his Recreational Time Travel Device which he uses to live outside chronological order (i.e. outside of Now) . His companions are TAMMY, the female user interface and Ed, his nonexistent but ontologically valid dog, now and then stopping in the Now, to speak to his boss (a computer program who is unaware that it is a computer program) and to observe his mother living in a one hour loop of her own choice, where she relives one hour of what she perceives to be the perfect life: a life where Charles come to dinner over and again. Most of Charles’ thoughts though gravitate towards his absent father whom he spent the past 10 (non-linear) years searching for. And then the unthinkable (or is it the inevitable?) happens: one day Charles shoots his future self, landing on a time loop from where he gets to be free only if he writes How to Live Safely in a Science Fictional Universe because as his future self tells him before dying: the book is the key.

Thus lies the crux of the novel: How to Live Safely in a Science Fictional Universe is a book in which the book itself is the story. The author is Charles Yu, who is also the name of the character who must write the book (which is already written) and spends most of the novel or the story, or the manual of whatever it is that you wish to call it, reflecting on the nature of life and time.

How to Live Safely in a Science Fictional Universe is a hard book to pin down and that is actually part of its allure. It is difficult to ascertain whether for example Charles is truly travelling in time. On one hand, the possibility exists because the character/author is aware of quantum physics and String Theory and the possible non linearity of time and space. The author even attempts some pseudo scientific babble (but that never truly works).

On the other hand, Universe 31 is a fictional, recreational universe where people choose to live, where the word “fictional” is of great import. Not only that, the explanation for the fictional world and living perhaps lies in something much more mundane: memory and regret.

In this book, Charles’ father is the creator, the mind behind the idea of time travel and of time machine and the idea is simple yet genius. It doesn’t require physics or mechanics, it is actually a matter of language, of uses of tense (there is even something called a Tense Operator). Where Universe 31 is a fictional world:

“with its incomplete conceptual framework, regions of exposed wire-frame structure, lack of complexity in terms of story-line geometries and dearth of heroes.”

How to Live Safely in a Science Fictional Universeto me, is Metafiction if I ever seen an example of one. It self-consciously draws attention to what it is that the author/character is doing and uses language metaphors of past or future tenses to deal with one’s life. It is there in the fact that Charles’ mother, an Asian immigrant can’t quite grasp English and its tenses which is part of what makes her irrevocably incapable of living in the world. With regards to Charles: does he really repair time machines or does he talk people out of wanting to change their pasts – a feat that is presented as impossible but which people are constantly drawn to – even Charles with all the self-awareness that he has.

Even though I am obviously fonder of the language theory, I believe that both interpretations are possible and how the reader interprets the time travelling aspect of the book is paramount to how one will eventually feel when closing it.

But putting all the meta (phor, fiction) aside, there is no disguising the fact that at its core, this is a book about a guy with daddy issues. Simple as that. Charles is stuck in a rut that he can’t (or rather, won’t) escape, thinking about the past, trying to understand his father’s failures, his own failures, trying to grasp where it all went wrong, why his father left and where did he go and how to get him back. His present relationships are all with people and animals that don’t truly exist and that points to someone who is incapable of relating to real people until he can resolve his issue. This is certainly true with regards to Charles, which is fine. I am not extremely keen on this trope which I usually find boring and unimaginative.

But when the author takes it a step further and makes Charles’ life choice less personal and more universal and tries to critically examine the world is where the book completely fails. It is there when the text says that people don’t talk to each other, that people live in boxes, everybody is a time machine, always looking at the past with regret. Not that these are not potentially true or couldn’t become true in the future but I intensely dislike the preachy, obviousness quality of those assertions.

How to Live Safely in a Science Fictional Universe certainly has brilliant moments, the language metaphor for time travelling is interesting and engaging and at times the book is beautifully written and those were what definitely kept me reading with gusto . But because there is too much self-awareness both in terms of what he is doing when he is writing the book and what sort of story he is writing (and sometimes even a certain pretentiousness slips through), the story to me, lacks real heart and I was unsatisfied with the result.

There is just enough space inside here for one person to live inde?nitely, or at least that’s what the operation manual says. User can survive inside the TM-31 Recreational Time Travel Device, in isola¬tion, for an inde?nite period of time.

I am not totally sure what that means. Maybe it doesn’t actually mean anything, which would be ?ne, which would be okay by me, because that’s what I’ve been doing: living in here, inde?nitely. The Tense Operator has been set to Present-Inde?nite for I don’t know how long—some time now—and although I still pick up the occasional job from Dispatch, they seem to come less frequently these days and so, when I’m not working, I like to wedge the gearshift in P-I and just sort of cruise.

My gums hurt. It’s hard to focus. There must be some kind of internal time distortion effect in here, because when I look at myself in the little mirror above my sink, what I see is my father’s face, my face turning into his. I am beginning to feel how the man looked, especially how he looked on those nights he came home so tired he couldn’t even make it through dinner without nodding off, sitting there with his bowl of soup cooling in front of him, a rich pork-and-winter-melon-saturated broth that, moment by moment, was losing—or giving up—its tiny quan¬tum of heat into the vast average temperature of the universe.

The base model TM-31 runs on state-of-the-art chronodiegetical technology: a six-cylinder grammar drive built on a quad-core physics engine, which features an applied temporalinguistics architecture allowing for free-form navigation within a ren¬dered environment, such as, for instance, a story space and, in particular, a science ?ctional universe.
Or, as Mom used to say: it’s a box. You get into it. You push some buttons. It takes you to other places, different times. Hit this switch for the past, pull up that lever for the future. You get out and hope the world has changed. Or at least maybe you have.

I don’t get out much these days. At least I have a dog, sort of. He was retconned out of some space western. It was the usual deal: hero, on his way up, has a trusty canine sidekick, then hero gets famous and important and all of that and by the time sea¬son two rolls around, hero doesn’t feel like sharing the spotlight anymore, not with a scruffy-looking mutt. So they put the little guy in a trash pod and sent him off.

I found him just as he was about to drift into a black hole. He had a face like soft clay, and haunches that were bald in spots where he’d been chewing off his own fur. I don’t think anyone has ever been as happy to see anything as this dog was to see me. He licked my face and that was that. I asked him what he wanted his name to be. He didn’t say anything so I named him Ed.

The smell of Ed is pretty powerful in here, but I’m okay with that. He’s a good dog, sleeps a lot, sometimes licks his paw to comfort himself. Doesn’t need food or water. I’m pretty sure he doesn’t even know that he doesn’t exist. Ed is just this weird onto¬logical entity that produces unconditional slobbery loyal affection. Super?uous. Gratuitous. He must violate some kind of conserva¬tion law. Something from nothing: all of this saliva. And, I guess, love. Love from the abandoned heart of a non-existent dog.

Reading next: An Artificial Night by Seanan McGuire