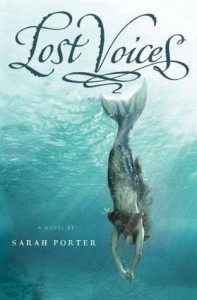 What happens to the girls nobody sees — the ones who are ignored, mistreated, hidden away? The girls nobody hears when they cry for help?
Fourteen-year-old Luce is one of those lost girls. After her father vanishes in a storm at sea, she is stuck in a grim, gray Alaskan fishing village with her alcoholic uncle. When her uncle crosses an unspeakable line, Luce reaches the depths of despair. Abandoned on the cliffs near her home, she expects to die when she tumbles to the icy, churning waves below. Instead, she undergoes an astonishing transformation and becomes a mermaid. A tribe of mermaids finds Luce and welcomes her in—all of them, like her, lost girls who surrendered their humanity in the darkest moments of their lives. The mermaids are beautiful, free, and ageless, and Luce is thrilled with her new life until she discovers the catch: they feel an uncontrollable desire to drown seafarers, using their enchanted voices to lure ships into the rocks.

Luce’s own talent at singing captures the attention of the tribe’s queen, the fierce and elegant Catarina, and Luce soon finds herself pressured to join in committing mass murder. Luce’s struggle to retain her inner humanity puts her at odds with her friends; even worse, Catarina seems to regard Luce as a potential rival. But the appearance of a devious new mermaid brings a real threat to Catarina’s leadership and endangers the very existence of the tribe. Can Luce find the courage to challenge the newcomer, even at the risk of becoming rejected and alone once again?
Lost Voices is a captivating and wildly original tale about finding a voice, the healing power of friendship, and the strength it takes to forgive.

Stand alone or series: Book 1 of a planned trilogy

Why did I read this book: To be honest, I was prejudiced against this book because the cover is so ridiculous – but I read the synopsis and was intrigued by a premise where lonely, abused, mistreated girls could be reborn as vengeful sirens/mermaids. That, plus the author’s impassioned explanation for writing the book, won me over.

Lucette Gray Korchak’s fourteenth birthday is anything but a day for celebration. With her mother long passed away and her father killed the prior year in a shipwreck, Luce lives with her uncle in the far reaches of Alaska. Invisible to those in her class, quiet and shy, Luce tries to draw as little attention as possible to herself – especially from her uncle, who has a habit of beating her, or worse, when he gets drunk. While walking on the cold, bleak cliffs on the way home on Luce’s birthday, her uncle forces himself on her, much to Luce’s horror. When she’s able to fight her way free, Luce knows that it’s only a matter of time before it happens again – but she has nowhere to go and no one to help her. Desperate, Luce runs away but loses her footing and falls from the stormy, darkened cliffside to the churning water below.

Instead of dying, however, Luce beings to change. Her body is torn apart and reshaped, and she is reborn as a mermaid. In the sea, Luce finds that she is not alone – she is one of the countless many young girls abused, maligned and neglected, born into new flesh in their most desperate and hopeless hour. It is here, in the cold waters off the Alaskan coast that Luce finds a new home with a tribe of mermaids. As a metaskaza, or newly made mermaid, Luce has much to learn. The mermaids live by a strict, unbreakable code called the timahk – and of paramount importance to their code is that a mermaid can never physically harm another of her kind, and they cannot allow humans to know of their existence. To break the timahk is to be exiled forever.

The other thing that mermaids do, as Luce soon learns, is sing their deadly, hungry song, causing ships to crash and their human sailors to die, enrapt by the beauty of their murderers. As all the mermaids are girls that have known misery and pain at the hands of mortals, they take glee in their killing – all, except Luce. Luce doesn’t want to hurt anyone, but to go against her sisters is to risk being alone, forever. Luce must decide whether or not to go against her new family and break the timahk, and follow what she knows is right.

The debut novel by Sarah Porter, Lost Voices is a harrowing, dark work about finding one’s voice, the prickly nature of tangled loyalties and friendships, and the pain of isolation. It’s by no means a light book, and Lost Voices deals with some hefty issues – abuse, neglect, filicide – though the writing is accessible and in tune with its fourteen year old protagonist. The idea of these maligned girls being reborn as mermaids with the ability to sing humans to their deaths, is a fascinating one, although it is a loaded premise. The nature of the mermaids and their natural inclination to kill and hurt is a dangerous proposition, but Sarah Porter handles the subtext with grace and sympathy. There are many questions I have, though, at the end of the novel. I want to know MORE about the mermaid curse – because that’s what it seems like to me, as opposed to a gift. Luce didn’t kill herself and she didn’t die; instead the curse kind of took her over and transformed her into a mermaid. The mermaid natural song also is one of death and destruction, but Luce is able to fight that urge for hate and death and make her own, powerful music. Why is it that only girls are metaskaza? How do they change if they don’t actually die? Who made these rules? While I have more questions than answers at this point, I have no doubt in my mind that these issues will be addressed in the next books (as they are already hinted at in Lost Voices) and I have every confidence in Ms. Porter that this will be handled with both delicacy and gravity.

As for characters, Luce is a strong heroine, and though she tends a little towards Mary Sue early on (especially given that she has one of the best mermaid voices in the entire tribe despite being metaskaza), she grapples with serious, soul searching questions. When she understands what her song can do, and how the other mermaids gleefully take part in sinking ships, she wrestles with her conscience and her desire to belong and be loved. Luce has integrity, and even though she’s scared and alone, she stays true to herself – making her a wonderful heroine worth rooting for. I loved all of the other mermaids too – cruel, capricious, fickle, loving, scared, domineering, confident…this tribe runs the gamut. As many other reviews mention, there is a sort of “mean girls”-esque feel to the tribe as it splinters under the pressure with new mermaid arrivals, but the group behavior and cliques that form are anything but comedic.

People can say terrible things to each other. There’s one passage in particular that is so painful to read, in which one of the girls snidely remarks that Luce must’ve done something to deserve the way her Uncle treated her. That she must have liked it or wanted it in some way. And as nauseating as that accusation is, Luce is able to fight back and recognize just how wrong her clan’s thinking is – because to accept the status quo is to accept that somehow she and the other mermaids ‘got what they deserved.’ And that is NOT true.

After all, she was basically saying that Samantha deserved to be thrown from a moving car, that Jenna deserved to be trapped in a burning house. Luce looked around for support […] No one met Luce’s eyes. After a second Luce understood why. They actually believed what Anais was saying to them. At least they half believed it or they were afraid it was true: that their parents had left them or hurt them because of some deep, secret flaw in their own hearts. It didn’t take much, just the smallest crack of self-doubt, and Anais’s words could insinuate themselves through the gap and then drive it wider. They were all ashamed. Just like Catarina. Even Samantha, who had insisted so loudly that no mermaid should ever allow herself to feel shame for one second. And Luce had never felt so sorry for them. “You shouldn’t listen to her,” Luce whispered. “None of you should.”

I loved that this section was included in the book, and that there is a conscious acknowledgement of guilt and fear, but also forgiveness and understanding. These girls are not at fault – and through Luce, Ms. Porter gives them a voice.

You know what else I loved about this book, most of all? The fact that there isn’t a love story in sight. This is a book about girls, friendships, group dynamics, fear, and hate and the ability to love in spite of all they have been through. And that is just what I needed to read.

Lost Voices is a powerful debut, and the start of a promising new series. I cannot wait to see where Sarah Porter takes Luce, and us, next.

The boat was speeding up now and the mermaids’ song flowed over the sky until every breath of air, every grain of sunlight, was awake and alive. Luce felt the song streaming over and inside her body, and then she heard a single high, tremulous note soaring up above the curls of music. It tore from her chest and peaked somewhere just under the sun, floated there, and then began a long, tumbling descent. The young sailor’s sleepy love changed, heightened into a fever of longing. The song entered into his mind, and Luce suddenly understood him.
Her quivering song felt his thoughts, and it told her how heartbroken he’d been since his mother’s death. They’d been fighting, and he hadn’t gone to see her in the hospital as cancer
ate through her; he’d stayed away, until it was too late.

She had promised she wouldn’t sing, Luce reminded herself. She could still lift her tail up into the sunlight and hold it there until the burning forced her voice to stop. But even then the ship would smash apart. Everyone on it was already doomed. And she couldn’t let the young sailor die, Luce thought, with so much grief still inside him. Her song fell and the note split into a widening chord, and then the young sailor knew that, even as she died, his mother had
forgiven him. She’d thought of him with the purest compassion, with gratitude for the years of joy he’d brought to her life.

At least, that was what Luce’s song told him. It vibrated with a sense of perfect homecoming, and as Luce sang to him everything broken was mended, and everything lost was restored.