Title:Ten Things I Love About You 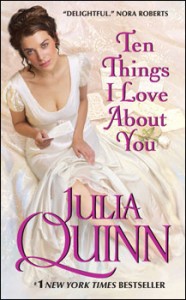 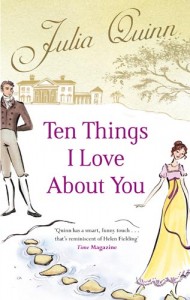 Sebastian Grey is in limbo. He is the heir presumptive to the Earl of Newbury, unless the current earl, a widower, can find a bride who will bear him a son. Newbury is in his sixties and somewhat portly, but as an earl he’s considered quite a catch. Sebastian, on the other hand, is twenty-nine and extremely handsome, but in no hurry to find a wife. Annabel Winslow, a country girl through and through, has received an offer to go to London for the season. The eldest of a family of eight, she knows that a good marriage might be the only thing that will save her family from ruin. After a few weeks in town, Annabel attracts the attention of the Earl of Newbury. The thought of submitting to him makes her skin crawl, but she is practical and determined to do her duty. Even when Sebastian Grey comes on the scene.

Stand alone or series: The novel is a sequel to What Happens in London but can be read as a stand alone.

Why did I read the book: I ADORE Julia Quinn’s books and have read every single one of them.

How did I get the book: I asked Piatkus for a review copy.

Julia Quinn is one of my favourite romance writers and having read every single one of her books, I was looking forward to her annual offering, especially since Ten Things I Love About You has tie ins with her previous novel, What Happens in London, a book I absolutely loved.

I could carry on like this but really, there is a better way to write this review:

Ten Things You Should Know About This Book:

One This is a Julia Quinn book, therefore it is well-written and light and funny as usual. It also follows her recent streak of having uncomplicated, almost conflict-free, love stories, that flow smoothly as the protagonists fall in love. I am very fond of this choice, as I love to see the beauty of watching two people falling in love with each other by simply talking and getting to know the other. Uncomplicated does not mean that it lacks complexity though, if you were wondering, although in this case, the complexity comes from the characters because

Two the plot is as simple as its blurb indicates and if you are a regular Romance reader, chances are: you have seen it before. Annabel, the heroine is the practical, country girl, with a huge family depending on her for financial support which lands her in the London’s marriage market. Her prospects are not that good given her poverty but she attracts the attention of the Earl of Newbury, some old dude who really needs an heir and given the fact that Annabel’s family is so prolific (she has 7 brothers and sisters), she seems to be the real deal. The Earl does have a presumptive heir, whom he loathes and that would be Sebastian Grey, the handsome rake with a secret on the side: he is the writer of Gothic Romances under the name of Sarah Gorely. Which brings me to:

Three one of the best things about the book is Sebastian’s secret. Back in What Happens in London,the bit where he reads from one of his novels was easily one of the most hilarious things I ever read. I was very much looking forward to seeing him as the writer, and how it would play out. Being a Gothic Romance writer is part of who he is and it was both funny and interesting (I loved seeing him coming up with storylines and titles for his books (I think my favourite is Miss Truesdale and the Silent Gentleman) and Julia Quinn is way clever as she incorporates in her own storytelling aspects of it and

Four that adds an interesting aspect of self-awareness to the procedures. For example in one particular scene Sebastian uses his fantastic imagination to come up with an explanation for Annabel’s behaviour at the beginning of the novel – when they first met – bear in mind that by this point he still doesn’t know that she might be getting married to his uncle. He surmises that she must have a dreadful suitor who must have attacked her in a dark corner only to scrap it because that would be too soon in the novel for such a drama which is HILARIOUS and self-deprecating since that is exactly what happens in the book. It basically opens with Annabel being attacked by the Earl who tries to kiss her and she flees into the night and ends up bumping into Sebastian. This is actually my least favourite set up of all Julia Quinn’s set ups because is based on the

Five “I just know” principle. Picture this: the book effectively starts as aforementioned with Annabel, a virgin on the marriage market, bumping into a man she does not know, in the middle of the night, outdoors, in the heath. She decides not to introduce herself but she “just knows” that this unknown person can be trusted not to attack her, compromise her, kill her, or all of the above. She just surmises that he is the sort of men who “knew women”, he surmises that she is the kind of woman that is “warm” and that is the principle of the whole thing and that’s how they get to

Six Talking. Despite the ridiculous set up (again, I can’t stand the “I just know” principle) , they do an immense amount of talking throughout the book and these talks range from witty repartee (and Julia Quinn does that really, really well) to in-depth heart to heart conversation. Sebastian opens up to Annabel about his difficulty getting over the War, for example, and that is the first time he ever tells anyone about it. If it looks like I am more fond of Sebastian, well, yes, I am. Because,

Seven Annabel did not rock my socks off. She is one of the quietest of Julia Quinn’s heroines, who usually tend to be feisty. I like quietly strong heroines and Annabel certainly has a lot on her shoulders and is very practical about it which I thought was great. But at times she comes across as too feeble, and my initial impression of her TSTL tendencies never really diminished that much.

Eight Also on the list of things I didn’t appreciate all that much: the villain is way too villainous and his reasoning for hating Sebastian was well, not very thought-out me thinks; Plus, Sebastian changes his mind about getting married way too fast and caught me totally by surprise….he changes his mind in two hours (even if those were momentous two hours – as he says)…

Nine but in the end, the good trumps the bad and I enjoyed myself very much whilst reading the novel. It might not be the most original of romance novels available right now, nor it is the best that Julia Quinn can offer but

Ten it IS a Julia Quinn novel after all, which means that is better than most offerings out there, better than most romance novels I read this year with at least two sequences that are made of awesome (and that includes the proposal scene – the second one).

She was grinning from ear to ear.

Seb thought of all the ladies he’d met in London, the ones who would have looked on in horror, or disgust, or if they had any humor, would have been bitting back their smiles, or trying to hide them behind a hand.

But not Annabel. She smiled like she laughed, magnificent and grand. Her eyes, greenish-gray turned pewter in the evening light, sparkled with shared mischief. (…)

Verdict: Although not the best that Julia Quinn can offer, Ten Things I Love About You has enough good – of the light variety – in it to merit a few hours of your time.

Reading Next: Looking for Alaska by John Green