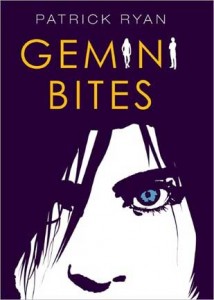 Judy and Kyle Renneker are sixteen-year-old fraternal twins in a rambling family of nine. They have a prickly history with each other and are, at least from Judy’s perspective, constantly in fierce competition. Kyle has recently come out of the closet to his family and feels he might never know what it’s like to date a guy. Judy, who has a history of pretending to be something she isn’t in order to get what she wants, is pretending to be born-again in order to land a boyfriend who heads his own bible study.

When their parents announce that the family is going to be taking in a fellow student for a month so that he can finish the school year before moving away, both Kyle and Judy can’t help but sit up and take notice. Garret Johnson, who is taking temporary residence in the newly finished attic, is a young man who moved into town less than a year ago and who is a mysterious, goth loner . . . and claims to be a vampire. He’s not an easy person to get to know by any means, but the twins find him (to varying degrees) both strange and alluring.

How did I get this book: An unsolicited review copy showed up at our door.

Why did we read this book: When this ARC showed up at Thea’s door, she immediately emailed to say that she’s got this Ana-book in the post and after reading about it, I decided she was correct and have kept it in my TBR till now.

Judy and Kyle are 16 year-old fraternal twins in a noisy family of nine. They have a bumpy relationship ever since their parents had a trial separation years ago and are always competing against each other, trying to best the other while they go about their lives. Kyle has recently come out to his family and close friends and is the self-proclaimed biggest exaggerator in the history of the universe and will tell you that his sister is a Monster, always mean to him (and perhaps even to everybody else). Judy will tell you that she is not mean, that she is actually the nicest girl you could ever meet. She has recently found religion – or rather, has found that religion will perhaps help her land her a new boyfriend as her most recent crush is a very serious Christian guy. Thus, she pretends to be a born-again Christian and since she is doing it for love, because she likes the guy, that is totally ok.

In the meantime, the family is getting ready to welcome Garrett Johnson, a student from the twin’s school who is going to spend the last month of his junior year with their family while his parents relocate to another state. Kyle and Judy find Garrett strangely alluring with his goth-like manner, suspicious behaviour and above all, his mind-blowing claim that he is in fact, a vampire. AND he might be into both twins which just amps the competition between Kyle and Judy to the max.

Well, Gemini Bites took me completely by surprise. It had been sitting on my TBR shelf for a while and I picked it up now because I was looking for something short and funny to read and this seemed just like the thing. And yes, it was short and funny and exactly what I wanted to read right now but it was also so much more. It is much more than just its funny parts and the story goes way beyond its zany premise to include really poignant and serious moments.

The chapters alternate between Kyle and Judy’s narrative and at first, Kyle comes across as the most sympathetic of the twins. He is charming, funny, friendly and extremely frank and open about his sexuality: not just about being out and proud but also how so freaking horny he is all the time. Sometimes, when reading YA novels, I get the feeling that the vast majority of stories have these weirdly chaste, PG-like teens and I appreciated how this book shows a bit more of the other side as well in a honest, up-front way. The chapter where Kyle describes getting his first ever blow job is quite possibly, one of the most hilarious things I ever read.

Judy on the other hand, is one of those teenagers that are angry, mean and extremely self-centred. Judy is not nice despite what she might tell the reader, she is not likeable ( at least not to start with) but she is a great character, I thought. Her arc is a bit more serious than Kyle’s because she has some real growing-up to do. It becomes clear later on that Judy falls into a pattern every time she has a new crush and this falls back into the biggest theme of the book: identity. From pretending to be something you are not, not knowing exactly who you are and why you do the things you do. Although not necessarily original I never felt the story fell into clichéd territory.

Speaking of clichéd: one of the greatest dangers, I feel, in writing such a short book with so many characters is that it would have been easy to fall into stereotypes. Garrett could have been the Lone Goth Kid; Kyle could have been simply the Gay Twin and Judy the Mean Twin and the entire family just background noise to support the story. However, the author avoided this brilliantly – all the characters had depth and even each member of the family had a striking personality. One of the things that I thought was so beautifully executed was how both Kyle and Judy felt they were simply just another kid in a huge family and felt they could get away with things because of that but it was clear that the parents had an eye out for every single of them without being particularly intrusive. It was just the right balance for me.

Having said that, even though its shortness did not mean necessarily lack of depth, it did mean that some things were perhaps dealt with too easily or too lightly (I am thinking about the secondary character who had serious psychological issues and was really and truly dangerous) and the ending was a bit too perfect.

But none of these things mattered: Gemini Bites is just the sort of Contemporary YA I love to read. Great story, great characters, with strong, varied LGBT kids without making it an Issue book, romance (kisses and making-out, NOM), a winner.

Notable Quotes/Parts: From Kyle’s Very First Blow-Job Scene, he is sitting in the car with another boy and the boy just asked him if he was gay because…he would be interested to know:

I stared out at the dark orange field surrounding us, and my heart was in my ears now, whump, whump, whump and I had this totally moronic sequence of thoughts: something gay is about to happen here. This spot will forevermore be the place where you had your first gay encounter. People will live here one day, in a nice big house, and never know they’re living on a sacred ground of gayness.

Reading Next: Stork by Wendy Delsol