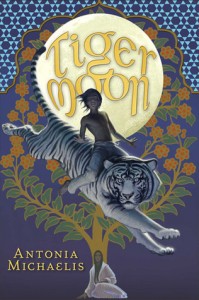 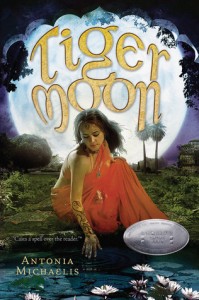 This bewitching story within a story, set in magical India, explores the power of narrative to change the course of lives. Raka, the doomed young bride of a violent merchant, weaves a tale of rescue so vivid, it might just come true. She tells a servant boy the story of Farhad, a thief and unlikely hero, who must retrieve a famous jewel in order to save a kidnapped princess from a demon king. Farhad’s unforgettable companion on the journey is a wisecracking white tiger with an unnatural fear of water. It is their unusual and funny friendship, and the final sacrifice that they must make, that is the heart of this grand, beautiful novel about summoning the hero within.

Why did I read this book: I was looking for Fantasy books with non-western settings and I came across this one on Amazon. It is an ALA award winning book and I thought it sounded great.

Set in magical India, Tiger Moon pays homage to Arabian Nights and Scheherazade by featuring a story within a story. Raka, a young bride married against her will to a powerful merchant who will surely kill her once he discovers she is not a virgin, tells a tale of rescue to a young servant boy (a eunuch, who is not actually a eunuch) called Lalit. She tells the story of another young boy called Farhad, a brilliant thief and reluctant hero who is engaged by the God Krishna to rescue his kidnapped daughter from a demon King. With the help of a talking white tiger, Farhad must cross India in search of an infamous, cursed jewel who will buy the princess’ freedom. Raka hopes that the story of how the reluctant hero Farhad becomes a sacrificing, courageous hero will inspire Lalit to summon the hero within in order to rescue her from certain doom.

At first glance Tiger Moon seems to be an innocuous read for children – it features a talking tiger, a sweeping adventure across the magical country of India with near-deaths, daring escapes and tales of love and hope. Plus a talking tiger whose funny banter with Farhad might just be the one good thing about Tiger Moon. But once you start peeling back its layers and carefully examine the narrative, the topics the story addresses, the meta-text and the way the story wraps up, the result is simply rage-inducing.

I don’t even know where to start: perhaps with the most obvious problem I had with the book. The narrative voice is extremely simplistic and childish. The feeling I had was that this oversimplification had a double objective: to make it accessible to children and to add a fairytale feel to the story. I think it backfired in many ways. I don’t believe in pandering to children and oversimplifying a story tends to lead to generalisations (more on that later) and therefore removing complexity from the story (please note: there is a difference between simple and simplistic. Narrative and writing can be simple and still extremely complex). This also means that the narrative voice was very childish and the characters sound very, very young to the point where I felt I was reading a book about 11 year old characters. Obviously this is not a problem per se, but the characters were much older than that and when they started getting married and having sex, it was extremely jarring as I had pictured them as children. It doesn’t help that for the vast majority of the story, the main characters are addressed as “boy” and “girl”.

That said here is a caveat: the original book was written in German and then translated into English. I don’t know how much of the prose was lost in translation.

But moving on to more important issues.

You will probably have noticed how I italicised the word magical twice so far in this review when in conjunction with “India”. There is an element of exoticising (did I just make this word up?) India that drove me UP THE WALL. Tiger Moon is professed to be a bewitching story set in magical India and from the get go the story is peppered with generalisations, words and descriptions that show how exotic, magical and chaotic India is. Incredibly offensive things like:

“Life is worth so little in India”

“In India, all stories are outlandish”

“Life in itself isn’t valued highly in India”

are presented as truths to the reader. N. K. Jemisin wrote a brilliant article for the blog a few weeks ago addressing this very issue and the following passage exemplifies exactly the problem I had with Tiger Moon:

Also worth of mention and on the point: two roundtable articles published this very week at The World SF Blog in which a group of non-westerners authors and bloggers discuss (among other subjects) the issue of “what are the problematics of some Western writers tackling non-Western settings for their novels, and do they result in exoticism?” . These are quite a propos of this review and fascinating. But note: I want to make it clear that I have absolutely nothing against Western authors writing about non-western cultures. But you have got to be way more careful than the generalist, appropriative tone of Tiger Moon.

But back to the review. You know what else? The exoticism of India doesn’t even MAKE SENSE IN THE CONTEXT OF THIS NOVEL. Because the vast majority of this story is being narrated by an Indian girl to an Indian boy. WHY, in the world, would two Indian people be describing India as though they don’t know their own country?

Which brings me to my final point and the climax of the novel. This is where things get REALLY spoilery and SHOUTY. Up until the last 15 pages of this novel, I was offended and angry, already knowing this was going to be a negative review for the reasons stated above.

The book has 448 pages. On page 433, Raka, the main character is SURPRISE! RAPED by her husband. But this is ok because she is rescued immediately after by Lalit, who is now a hero and it all magically disappears as they ride into the horizon together. There is NO reaction, repercussion, mention, NOTHING about the rape. Nothing. It is like it never happened merely ONE SECOND before they take off. It is completely gratuitous and STUPID and demeaning, it serves the story no purpose whatsoever because it has NO IMPACT on the character. It is problematic because it is gratuitous, it is even more problematic because the story and characters never address it. It made me sick.

Not to mention that the whole book ostensibly pays homage to Scheherazade. But in the end, the whole point of the story is to make the BOY become a man in order to rescue the girl and all the talk about being a “hero within” applies only to the BOYS. Obviously. Because GOD FORBID the girl be the heroine of HER OWN STORY. To the point where the hero is described as a MAN in the end because he has grown so much whereas Raka, the main character and narrator of the story who was once described as strong and fearless, remains a girl and diminishes and lets him FINISH HER STORY. How can you pay homage to Scherezade and miss the CRUCIAL POINT of her being THE INSTRUMENT OF HER OWN SALVATION?

I wish I were making this shit up. I have nothing more to say so I will leave you with the words of Captain Picard: 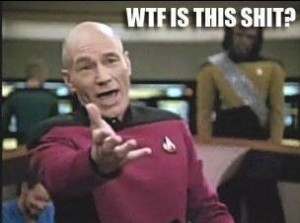 Notable Quotes/ Parts: NO notable quotes but as I was looking for an excerpt online I came across this AWESOME review which you must read.

Rating: 1 – One of the worst books I have ever read; I want my money (and a few hours of my life) back