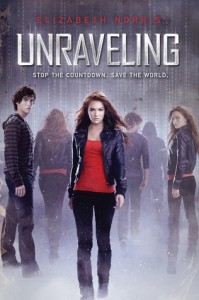 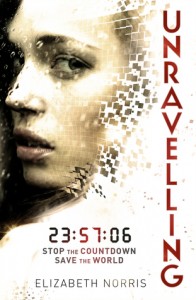 Sixteen-year-old Janelle Tenner is used to having a lot of responsibility. She balances working as a lifeguard in San Diego with an intense academic schedule. Janelle’s mother is bipolar, and her dad is a workaholic FBI agent, which means Janelle also has to look out for her younger brother, Jared.

And that was before she died…and is brought back to life by Ben Michaels, a mysterious, alluring loner from her high school. When she discovers a strange clock that seems to be counting down to the earth’s destruction, Janelle learns she has twenty-four days to figure out how to stop the clock and save the planet.

Stand alone or series: Book 1 in the Unraveling Series

Why did I read this book: I’ve been in the mood for a good science fiction thriller, and after Strangelets fell short of hitting that sweet spot, I had hopes that Unraveling could help quench my thirst for multi-universe-spanning SFF action.

When sixteen year old Janelle Tenner finishes a day of lifeguard duty at the beach and is asked out by the guy she’s been crushing on, life seems pretty great – that is, it does until she discovers that her car has been trashed by a jealous ex, and she has to walk home. To make matters worse, on the walk home, she’s hit by an out of control truck and dies.

Death isn’t at all like Janelle pictured, though – instead of seeing her life flash before her eyes, she sees memories of herself through someone else’s vision, and feels someone’s hands willing her broken body to heal. And just like that, Janelle awakens, her severed spinal cord and massive internal injuries somehow magically fixed. All Janelle can think about and remember is that she was impossibly brought back to life by the most unlikely of saviors, stoner and burnout classmate Ben Michaels. No one believes Janelle, though, and Ben denies any part in her miraculous recovery – that is, he does until Janelle confronts him with proof.

And then, everything J knows about her world changes.

Janelle’s death and resurrection, Ben’s particular abilities, her FBI special agent father’s most recent case are all intrinsically intertwined – and at the heart of all of this intrigue, there’s a ticking clock, counting down until the end of the world.

Unraveling is a ridiculous, over-the-top cheeseball ride of a book. It’s exploitative and formulaic, riffing on all the now-familiar tropes in YA PNR/SF today. It’s melodramatic, compulsive, and… dudes. It somehow all works. In a totally guilty pleasure, I shouldn’t-like-this-as-much-as-I-do-but-I-don’t-care-I-NEED-TO-KNOW-WHAT-HAPPENS-NEXT kind of way.

You know those books. If you’re in the mood for a ridiculously entertaining read, well hold on to your knickers, because Unraveling hits the spot. (This is of course, if you don’t mind the cliches – because they are everywhere.)

Imagine, if you will, that pivotal first scene in Twilight, in which Bella discovers Edward’s supernatural speed and strength; now, imagine that scene if the truck that skidded and almost hit Bella actually did hit Bella. THAT is how Unraveling starts, and provides the same catalyst for getting the starcrossed couple together – this time it’s not a vampire and a human, but two people who cannot be together (for other reasons that I won’t spoil). Similarly, there’s the familiar appearance of not insta-love, but the “I’ve always loved you from afar” trope. In this case, Ben has always been in love with Janelle and she’s never noticed the guy until he saves her life, and then proceeds to smittenville. While this is a trope I am not a fan of in most circumstances (second only to the dreaded insta-love), I do love that the inherent creepiness of this trope – and stalker/obsessive tendencies it always seems to embrace – is called out repeatedly by heroine Janelle. Heck, at one point, she has a debate with said love interest about the difference between OBSESSION and love in a classroom debate that is full of win, starting with Janelle’s observation:

It’s a marriage proposal. It’s definitely persuasive. It begins with a romantic declaration and continues with a passionate “I’d die without you” type of speech. It’s enough to make even me smile a little. Only as I keep reading, something about it bothers me. It’s like as the guy goes on he gets more and more dramatic. But buried in all the lines reiterating exactly how he would die for her (fire, water, crime, disgrace, he tries to hit all the ways possible) is this line: “what I mean is, that I am under the influence of some tremendous attraction which I have resisted in vain, and which overmasters me.” Why do guys do that? Rather than just say how they feel, they act like the girl is seducing them or something. It’s ridiculous.

That’s to say, while the landmarks are familiar on this girl-meets-boy roadtrip, there are some smart and memorable twists. By the same token, however, there is a whole bunch of ridiculousness that I was not particularly crazy about. Leading that list is the writing style, which is clipped, a little simple, and far too melodramatic for my tastes (every short chapter ends with a Dire Statement or Snippy One Liner). Similarly, there are cliched phrases that drive me nuts: every heavy kiss between Janelle and Ben involves sighing into each other’s mouths (hmm), or Janelle’s repeated descriptions of Ben smelling uniquely Ben (a mixture of soap and shampoo and gasoline – at least she doesn’t use the uniquely male line *gag*). There’s also the fact that Janelle and her friends go off half-cocked and withhold evidence from the FBI when the world is going to end, which is seriously wacky.

And that brings me to the SFF elements, because after all, this is a science fiction book. On that front, the ridiculometer is nearly maxed out, but Unraveling manages to walk the line between cheesy abandon and engaging action beautifully. The multiverse explanation for everything is more along the lines of magical fantasy than actual science (as is the nature of Ben’s peculiar abilities, for that matter) but I was able to put aside my skepticism in the name of entertainment value. Plus, there’s a level of geekiness and brutality to Unraveling that help the story along. People die in this first book – major people – and there’s no coming back (or at least I seriously hope there isn’t any coming back). There’s a ton of quirky charm to the novel too – for example, the repeated X-Files references and the fact that the ludicrousness of the book is actually addressed by Janelle and company at different parts of the text.

Ultimately, Unraveling is probably not gonna work for everyone, but I truly enjoyed it with wholehearted abandon – I’ll definitely be back for Unbreakable very soon. Totally recommended for the cheese-lovin’ SFF/YA PNR fan.

Notable Quotes/Parts: Head over HERE to read a 91 page excerpt of Unraveling.

Additional Thoughts: Make sure to check out our stop on the Unbreakable blog tour today to read a 100 page excerpt of book 2 – plus get a chance to enter a giveaway of books 1 and 2 in the series!

Reading Next: Keeper of the Isis Light by Monica Hughes

Book Review: The Summer of You by Kate Noble