Anthology Review: It Happened One Night

Title: It Happened One Night 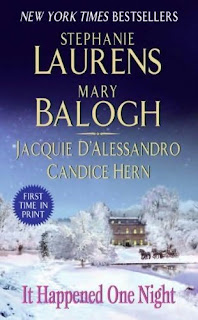 Summary: It Happened One Night . . . and nothing was ever the same again!

Once upon a time, four superstar storytellers – New York Times bestselling authors Stephanie Laurens and Mary Balogh, along with Jacquie D’Alessandro and Candice Hern – came up with a delicious idea. What if they each wrote a story about a proper young lady stranded at a remote inn away from society’s constraints? What would happen? And how long would it take for her to give in to desire?

In these four amazing tales, four heroines will come face-to-face with the men who got away . . . only to discover that, instead of anger, there is still a passionate connection that cannot be denied. And while each of their lives is quite different, and their pasts utterly unique, they will all make a common discovery – that one night can change everything . . . forever.

Why Did I Read the Book: I received an ARC from the publishers.

The idea behind the book is a very interesting one. One day, coming back from a book tour Mar Balogh came up with the idea of writing an anthology with three other writers where all four of them would be given the same premise and go from there: “a man and a woman, who have neither seen or heard from each other for ten years, meet again when they find themselves staying at the same inn for a twenty-four hour period”. The purpose is to go against the general assumption that all romance novels are the same – read one, read them all -by having four romance novelists writing their stories without talking to each other or exchanging ideas. The result is It Happened One Night and the goal has been achieved – all four stories are very different not only in the development of the premise but also in the quality of the end result: two of them are very very good and two of them are….not.

The Fall of Rogue Gerard by Stephanie Laurens

Robert “Rogue” Gerrard is a notorious rake – or at least he was for several years. About four years ago his life has taken a turn for the better and he has become a better man, not that anyone will believe it. One night, whilst traveling he is caught in a tempest and has to make an overnight stop at an inn. There, he takes refuge at the parlor only to be joined by a ghost from the past – also feeling the storm , there it was Lydia Makepeace, the only woman he has ever loved.

Robert and Lydia had been childhood friends , they walked and they talked and when he was 22 and she was 16, he started developing feelings that were too much for someone so young and because he didn’t want commitment at this point of his life, he fled, because he refused to believe she was his destiny. So he became a libertine, a gambler, etc, etc. But

“fate, circumstance, and coincidence, it seemed, were once again taking a hand in his life

Lydia right now, is about to do something stupid (courageous, depending on the point of view) – she is trying to help her sister getting rid of incriminating evidence of a compromising past and Robert decides he needs to help her. And Lydia who thinks she will die an old maid, decides to it is about time to get matters in her hands and seduce the rogue – he is ravished, seduced and finally understands that all resistance is futile.

This was a good, solid, entertaining story – with the premise of soul mates being present and being believable. It may be a short story but Stephanie Laurens managed to pack a lot and still make it well worthwhile a read.

Nora Ryder is a companion who has just quit her job. She is on her way to catch the stagecoach to London when there is an accident and the stagecoach is stranded overnight. Penniless and trying to figure out how in the world she will be able to afford staying at the inn when she runs into Richard Kemp – her husband. Or is he? Richard, who was somewhat responsible for the accident is also stuck at the small village and cannot believe his eyes when he sees his wife (or is she?) a woman he has been trying to forget for a long time. He is torn: he doesn’t want to see her, he doesn’t want to be near her, he still hurts, he doesn’t want to care that she has nowhere to go and not money, but he does, so he invites her to stay with him. This is a story that starts full of hurt and angst because each believes they have been wronged by the other – ten years ago, Richard was her father’s secretary and they eloped. They got married, consummated the marriage and then her father bursts in and takes her back. Neither understands why the other hasn’t act upon this.

But it is May Day and they decide to call it a truce and enjoy the festivities at the small village and little by little their shields drop and they start to realize that every single assumption they have made about each other, about what happened on the day they married is wrong.

This is my favorite story of them all and I would say it’s worth buying the full book, specially for Balogh’s fans. The story and the writing itself are very good and what starts in a dark place , ends in light and happiness. The way the ice around their hearts start to melt was so beautiful and sometimes, even lyrical. There are no missed word, no missed steps in here and every single moment has a significant. I loved this story.

Only You by Jacquie D’Alessandro and From This Moment On by Candice Hern.

These two stories were my least favorite. It was my first story by both these writers and if I am to be honest, they haven’t made such a positive impression that I would go and read more by them.

Only You is the story of the stable Ethan Baxter who has loved Lady Cassandra Heywood, FOREVER. They were friends when they were children, but they both knew Cassandra would go on to do great things, i.e. marry a peer. Ten years on, Cassandra is a window after many years of a unhappy marriage and Ethan is the owner of an inn. He has always believed that she has been happy all these years and he dies a bit inside when he learns that it wasn’t so. She shows up at his door, trying to catch up and spend the day with him. At the end of it, he asks her to stay the night and finally learns what pleasure is.

From This Moment On has Middle-aged Captain Sam Pellow retiring from the army and is on his way to a friend’s house when it starts to rain and he must stop at an inn. And to his surprise in there walks Wilhelmina, Duchess of Hertford, his one time lover, the love of his life. He has loved and hated her for 25 years – ever since they were both poor. Sam was a fisherman and one day was lost at sea and everyone thought him dead. Without prospects , Wilhelmina becomes the lover of a painter and later a famous courtesan until one of her patrons, a Duke asks her to marry him. Sam who had not been dead (duh) , returned to find “his girl” a courtesan and has never forgiven her. They had many encounters throughout the years full of hurt feelings. There has been no encounter for the past decade though and now Willie decides it is time they have a good time together, specially with everything she has learnt over the years.

I found both these stories to have a lot potential, but both ended up being cheesy and clichéd. After reading two very good stories and learning that it is very possible to have a very fulfilling, rounded love story in a few pages, I felt rather disappointed at how the last two seemed to rush the plot to get to the “really good parts” aka, The Sex. There were also some sloppy bits of dialogue. One that comes to mind is a sequence from From This Moment On, when the heroine tells the hero that way back when she lost their child and he feels utterly sad and his reaction is and I quote: “noooooo. Oh no, Willie, my love” . Not only the dialogue was a turn off , also the fact that this could have been a much more emotional moment, but the feeling that came out of it was the writer was hurrying up through the motions to get them in bed, which happened merely two pages later.

In any instance, the first two stories are really good and well worth the time. Maybe even the money. Who knows, maybe you will even like the stories I didn’t? It has happened before……