Book Review: To Seduce a Sinner

Title: To Seduce a Sinner 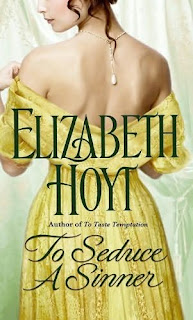 Stand Alone/ Series: It is book 2 in a series called The Legend of The Four Soldiers but it can be read as a stand alone.

Summary: THE ONE THING HE CANNOT REVEAL
For years, Melisande Fleming has loved Lord Vale from afar . . . watching him seduce a succession of lovers, and once, catching a glimpse of heartbreaking depths beneath his roguish veneer. When he’s jilted on his wedding day, she boldly offers to be his.

TO THE ONE WOMAN HE MOST DESIRES
Vale gladly weds Melisande, if only to produce an heir. But he’s pleasantly surprised: A shy and proper Lady by day, she’s a wanton at night, giving him her body—though not her heart.

IS HIS DEEPEST NEED . . .
Determined to learn her secrets, this sinner starts to woo his seductive new wife—while hiding the nightmares from his soldiering days in the Colonies that still haunt him. Yet when a deadly betrayal from the past threatens to tear them apart, Lord Vale must bare his soul to the woman he married…or risk losing her forever

Why Did I Read The Book: I read book 1, To Taste Temptation and really enjoyed it.

Melisande has admired, observed and loved Jasper from afar for the past six years. When the opportunity presents itself – as Jasper is jilted by his fiancée at the altar – she jumps in and offers herself as a substitute. Jasper knows who Melisande is, in theory – best friend of his neighbor and former fiancée (another one) – but he can’t remember her name nor understand her reasons for wanting to marry him. Still, any wife will do and one must beget heirs and he could do worse than plain, controlled Melisande. They get married and at first, their relationship is distant and proper – just like the two of them want. Melisande, even loving Jasper as she does, prefer to be restrained in her affections as to avoid heartbreak and Jasper has his own reasons to keep her away – even their wedding night at the beginning of the novel is as mechanical and ludicrous as I rarely see in a romance novel – Jasper’s mission is to get in, get out, as fast as possible as to not frighten his virgin bride.

Still, by the law of all things Romance Novelish, they start to notice, REALLY notice each other. Not overnight, but slowly. Jasper who had never really looked at her, never paid attention to her, not even after the wedding night – as made plain in a very poignant sequence where he presents her with earrings when her ears are not even pierced, starts to realize that he does want to know who she is. Melisande on the other hand, who thinks knows everything about joyful, fun-loving, seducer Jasper, realizes that there are different layers to the man that hide his true self.

The main drive of their love story as the plot progresses is for both of them to try and find out everything that there is to know about the other – without ever letting the other in. Their fear that an open, vulnerable heart will bring misery is overturned when the fear of not having one another becomes even greater.

But this is not by any means, all that there is to To Seduce a Sinner. The mystery about Jasper’s past and why he is a creature of the night – always searching company, afraid of the dark – has to do with an ongoing plot that started in To Taste Temptation. Seven years ago, Jasper was a Captain of His Majesty’s Army fighting the French in the Colonies. A member of the 28th Regiment of Foot, a regiment who had been marching from their victory in Quebec, when they were ambushed and decimated by Indians. Very few survived, 8 were captured and taken prisoner to the Indian camp and tortured being belief. Jasper is one of the 6 that survived. In book one of the series, Jasper learns from the hero of that other book (who was another survivor) that there was a traitor in their regiment, and the search for this man is what propels his character in To Seduce a Sinner.

This is a perfect example of a romance novel with a secondary mystery plot that is not only interesting but also organic in the way that it drives the romance forward instead of being only an excuse for (external) conflict. Jasper is a man that truly is shaped by his past, who still suffers the consequences of what he went through in the colonies (post traumatic stress disorder comes to mind) and thinks his is only but a half-man who could never be loved in his totality by Melisande. His reasons for not wanting her to come too near sounded reasonable and realistic and it is a great moment of heartwarming romance when Melisande accepts his past and his way to deal with it. As is the moment when he proclaims his love for her – aw-worthy. Specially when I am a fan of the ugly duckling story – the plain heroine who turns into a beauty in the eyes of the hero.

I was equally gripped by the search of the traitor as I was by the interaction (great lines of dialogue here) between Jasper and Melisande. I have one small gripe with the book though – the sex scenes. Elizabeth Hoyt writes scorching hot, bordering erotica but not quite, sex scenes that are not usual for historical novels (at least the ones I read) . I think they work really well but in this particular book I thought they were off the mark. It has the usual graphic, maybe even crude language but also some flowery language that just didn’t work when combined. The sex scene would start with usual graphicness and then Jasper would utter “Ride me, my heart” or “Take me inside, my lady wife” and my inner 12 year old would start giggling like an imbecile.

Still, in To Seduce a Sinner I found a very good novel and I was thoroughly satisfied when I finished it. I am on a reading slump and this is the first real sign that I am making my way out of it.

Not a direct quote this time: there are two sequences that I really liked. First , shortly after they got married, Jasper walks into Melisande’s bedroom and walks around trying to figure out who his wife is. Because she is so closed-off, he expects he could find traces of her character in the things she keeps in her room but alas, there is nothing expect for the snuff box where she keeps her treasures which is not enough to tell him more about her. In a mirror sequence later in the book, Melisande does the same with not quite the same result. Both sequences were rather poignant in showing the two characters trying to reach for each other secretly.

The next book in the series, To Beguile a Beast is the story of Sir Alistair Munro – a Scottish botanist, one of the survivors of the attack and one who lives in a castle in Scotland with only a servant around and in the dark with a dire need for a housekeeper. Alistair has the most horrendous scars to show for his torture , half of his face is disfigured and he has lost one eye – he can’t walk around without having children screaming in fear at the mere sight of him. At the end of To Seduce a Sinner Melisande sends him a housekeeper, a Beauty who will, I am most certain, tame the tortured, dark, and did I mention, Scottish!!!, Alistair. Be still my heart, it is a Beauty and the Beast story and I can not wait for it. 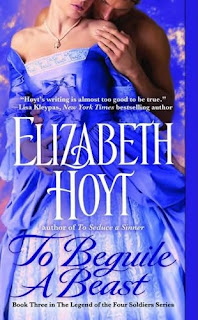 Verdict: Very good , with a gripping mystery and a good pair of protagonists. Recommended to fans of Elizabeth Hoyt and for those who love historical romance with scorching sex on the side.

Reading next: The Graveyard Book by Neil Gaiman