Only Ever Yours is 1984, Mean Girls and Handmaid’s Tale rolled into one, featuring a brave if completely pessimistic magnifying glass to how we treat women right here right now. It takes everything that is misogynistic about our world and boils it down to an undiluted, concentrated dose of bleak despair. I am pretty sure I loved it. 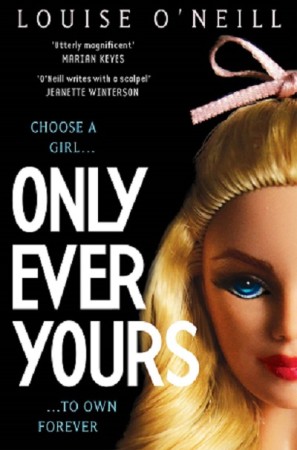 Title: Only Ever Yours

In a world in which baby girls are no longer born naturally, women are bred in schools, trained in the arts of pleasing men until they are ready for the outside world. At graduation, the most highly rated girls become “companions”, permitted to live with their husbands and breed sons until they are no longer useful.

For the girls left behind, the future – as a concubine or a teacher – is grim.

Best friends Freida and Isabel are sure they’ll be chosen as companions – they are among the most highly rated girls in their year.

But as the intensity of final year takes hold, Isabel does the unthinkable and starts to put on weight. ..
And then, into this sealed female environment, the boys arrive, eager to choose a bride.

Freida must fight for her future – even if it means betraying the only friend, the only love, she has ever known. . .

Why did I read this book: It started to generate great buzz last year but having read so many terrible dystopian YA novels, I admit I was a little bit wary. Then it won the first ever YA Book Prize in the YA recently. Then I saw Louise O’Neill speak about feminism and rape culture at the YA Lit Con here in England and was smitten. I had to give it a go.

Only Ever Yours by Louise O’Neill is the inaugural YA Book Prize winner. It’s a dystopian YA unlike any other dystopian YA I have read recently because it doesn’t pull punches and it completely adheres to its internal logic and constraints. It’s a dystopian world that sustains itself and actually works, which means that one person cannot change it. It completely avoids that pitfall that a lot of dystopian novels don’t, the one where “The system is infallible for everyone except me.”

It’s the future. Global warming, apocalypse, death, change have happened at some point and now only a handful of nations have survived, most of them nothing but small villages with a few thousand people. This is certainly the case of Britain, where our story is set. We don’t know much else: our reading is completely limited because the viewpoint narrative is that of a person whose own worldview is nothing but limited.

We know this: at some point people stopped having girls naturally and started engineering them. From an early age all girls are brought to the School – an underground facility where the walls are covered in mirrors, their every single movement observed – where they grow up preparing themselves for their sixteenth year, when they will be chosen by the Inheritants, the boys who have been waiting for them.

The eves – that’s how women and girls are called – will be then allocated one of three possible futures: to become companions, concubines or chastities. The companions have the biggest responsibility: that of having the baby boys who will become the future leaders. When they reach an age where they can no longer reproduce, the companions are disposed of. The concubines are for pleasure and they might live longer if they manage to get plastic surgery. Most of them don’t live past their forties. The chastities are the unwanted girls, the ones left behind and who take care of the School and are never allowed to leave.

All eves answer to the men. Always.

The narrative never leaves the School and most of the story features only the eves, until the Inheritants come to meet them later on. In the build up to their visit, the eves experience extreme anxiety over their futures. They know being a companion is the best possible outcome (because then they wouldn’t be whores would they?) but to be a companion you have to be your absolute best: to look great, to behave according to the rules and to always do what you are told by the Inheritants.

The curriculum at the School is simple: gym, diet. They learn the messages out of the “Guide to the Rules for Proper female behaviour”. They watch videos and are constantly on social media talking and competing against each other in the story’s equivalent of Youtube and facebook. It’s not until later into the novel that you understand that they don’t even know how to read. The concept of “maths” is alien to them unless it’s calorie counting.

Unlike other examples of recent Dystopian YA, it doesn’t negate or erases queerness in-narrative, although the dystopian society has no use for queer people.

Have I managed to convey the horrors here? I am not completely sure. This is only the tip of the iceberg.

The story is told from freida’s perspective in the months leading up to the Inheritants’ arrival. If the devil is in the details, then this book is indeed hell.

Look, none of the girls have names starting with capital letters. Most of their names are related to beauty and celebrity life. Conversely, the boys have names like Abraham, Leonardo.

Conflicting messages that mirror that of our society are all over the place: the girls need to be saints and say no to sexual advances if they want to be companions at the same time they are taught all their lives they must never say no to a man. How do you navigate this without losing your mind?

And losing her mind is what is happening to freida: we know this but she doesn’t. And this is probably what makes Only Ever Yours a good book: that it goes beyond its message and its dystopian baseline, to tell us a story of a young girl falling apart without understanding what is happening to her because she doesn’t have the tools and the knowledge to do so. The narrative is unreliable, uncertain, horrifying in its lack of self-awareness.

freida can’t sleep even with the sleeping pills she is given, and she lies awake and as she does so, messages play in the background, she doesn’t even pay attention to them but they feed her subconscious and the other sleeping girls’ with messages like “ladylike at all times” and “emotional behaviour can be off-putting to men”, “I am a good girl. I am appealing to others. I am always agreeable.”

Her best friend is isabel who all of sudden goes from being top girl to starting to eat chocolate (horror of horrors) and put on weight and their relationship is the underpinning of the novel: it is behind freida’s motivation and anxiety without her ever acknowledging it. isabel’s is at the centre of a cleverly constructed mystery within the novel and one that broke my heart into a trillion little pieces. Those pieces were subsequently stomped on into dust by what happens in the end.

I have been writing this review for a few weeks now. The first attempt was deleted. I had to start over multiple times.

Part of me wants to say: does this story make sense? How exaggerated is the set up and premise? I am not sure how convincing Only Ever Yours is: could a dystopian future like it really exist?

Here is the thing: a few days after reading the novel, Glamour magazine posted an article called “13 Little Things That Can Make a Man Fall Hard for You” which included things like “answering the door in a negligee”, “making him a snack after sex” and “letting him solve your petty work problem”. I was horrified. Thankfully so was the rest of the Internet and the magazine eventually took down the article. But the internet never forgets and The Vagenda’s Rhiannon L Cosslett tweeted a full screen shot:

How to make a man fall in love with you, according to Glamour. Become quasi non-verbal sex robot, in negligee pic.twitter.com/CIjrBfLHto

I then thought about all the ways that women’s lives, looks and behaviour are constantly controlled, monitored, under scrutiny. I thought holy fucking shit, that future is right here, right fucking now.

Then we have to deal with the question of my personal reaction to the story and how bleak, hopeless, triggery it is. You open Only Ever Yours and you are plunged into a story whose foundations are built on misogyny, where misogyny covers the walls, where there is nothing but misogyny: it’s the status quo where the bones of this futuristic society are built over the lives of repressed, oppressed, despised girls. The narrator is a young girl who has internalised the misogyny and being inside her mind is awful. There is no escape. THERE.IS.NO.ESCAPE. It’s suffocating. It was one of most horrific, harrowing experiences of my reading life.

Ultimately, Only Ever Yours is 1984, Mean Girls and Handmaid’s Tale rolled into one, featuring a brave if completely pessimistic magnifying glass to how we treat women right here, right now. It takes everything that is misogynistic about our world and boils it down to an undiluted, concentrated dose of bleak despair.

I am pretty sure I loved it. I would not want to ever read it again.