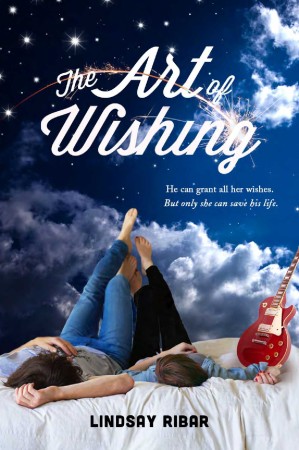 Title: The Art of Wishing

He can grant her wishes, but only she can save his life.

Margo McKenna has a plan for just about everything, from landing the lead in her high school play to getting into a good college. So when she finds herself in possession of a genie’s ring and the chance to make three wishes, she doesn’t know what to do. Why should she put her life into someone else’s hands?

But Oliver is more than just a genie — he’s also a sophomore at Margo’s high school, and he’s on the run from a murderer. As he and Margo grow closer, she discovers that it will take more than three wishes to save him.

Why did I read this book: To be honest, I saw this book when it first came out and immediately dismissed it. The book description is so cheesy, and contemporary YA and I don’t tend to click very well. That said, I’ve been hearing good things about this book from trusted sources – not to mention The Art of Wishing is one of the books and Lindsay Rebar is one of the authors featured on the panel I’m moderating at New York Comic Con NEXT WEEK. (OHMYGOD IT IS NEXT WEEK!) Needless to say, I had to read this immediately.

Eighteen year old Margo McKenna has her senior year firmly under control. She’s nails her audition for her high school production of Sweeney Todd and knows she’s a lock for the role of Mrs. Lovett. (Not to mention, she’s got a crush on the only guy who could possibly play her on-stage counterpart, the Demon Barber of Fleet Street.) So, when Margo learns that she has lost the role to a meek sophomore nobody, Vicky, it’s a bitter pill to swallow. Despite the intense disappointment, however, Margo is resolved to be gracious in defeat and do the very best she can in her role (Toby – a lead, but one with far less stagetime and songs). Still, she can’t shake the feeling that something very strange is going on – suddenly everyone wants to be Vicky’s friend, never mind the fact she has all the charisma and acting ability of an automaton.

And then, there’s the kicker.

After a particularly dismal rehearsal (dismal because of Vicky’s wooden performance, not so much Margo’s), Margo interrupts a distressed Vicky in the theater restroom – when Vicky abruptly leaves, she also leaves behind a curious ring. Which Margo, of course picks up.

This is no ordinary ring. It once changed the course of a young man’s life. A young man, who, like this ring, was more than what he seemed. A diamond in the… ok, ok, I’ll stop with the Disney snark – although it honestly is quite àpropos, given the irreverent, funny tone of The Art of Wishing. But I digress –

The ring summons a boy named Oliver to the bathroom – another innocuous, nondescript sophomore. Except that Oliver is no ordinary young man; he’s actually an honest-to-goodness genie. And Margo is his new master, with three wishes to make of her very own. Wishes with limitations, of course, but magical, impossible wishes nonetheless. The only catch is that Oliver has to skip town soon because someone from his (very long) past is out to kill him – Margo has to make her wishes count, and make them quickly. Of course, there’s also the slight problem that she’s falling for Oliver…

The debut novel from Lindsay Ribar, The Art of Wishing is… a mixed bag. At best, it’s charming, irreverent, and fun. At other times, however, it raises some uncomfortable questions about choice and agency, and the book ends in a way that doesn’t sit well with me at all. But I’m getting ahead of myself again – let’s start with the good.

On the positive side, The Art of Wishing stars a wonderful heroine, who is smart, ambitious, and dedicated. I loved Margo’s spunk, her confidence in her abilities as a singer and actress, and her take-no-prisoners attitude towards becoming the best at her role in the play (even though it’s a role she’s not initially excited to have). I love a heroine with gumption and flexibility, and Margo has both of those qualities in spades. I also very much appreciate how Margo handles her crush on Oliver – and what happens when she learns that he is not sixteen, but a decidedly Edward Cullen-esque 200 years old.

That night in the parking lot came rushing back to me – the streetlights, the cold, Oliver’s eyes. Except this time, I was picturing rotting zombie lips, slowly moving toward my own. I shuddered.

I narrowed my eyes at him. “Okay, then you’re a dirty old man who tells people he’s a teenager. Except in real life instead of online. And with magical powers.”

Except… Margo’s attitude towards the creepy 200 year old dude masquerading as a sixteen year old? It doesn’t really last. Margo and Oliver are passionately smooching smooches of tingly genie magic within a chapter or two following this big reveal. You see, Oliver reveals that he generally picks the brains of his masters and becomes what they want or need of him. Oh yeah, did I mention that he and Margo have a master-genie psychic connection? Oliver can sense what Margo wants – to aid him with the wish-granting, of course, but it also comes in handy when he knows Margo wants more kissing.

This raises a big question of agency and servitude, of power and submissiveness – but none of these questions are tackled in the text. Oliver is content to be a genie because it’s rewarding and happy-making for him. If he’s wished free, he will literally cease to exist, so he’s happiest serving someone worthy of his magic. This smacks of deeply problematic connotations – the “happy slave” problem, all over again. Exacerbating the issue is the fact that Oliver says he makes himself whatever his masters want – brother, sister, lover. How is this not creepy? Not only is Oliver nearly 200 years old, but he also shapeshifts and molds his personality to become whatever his master desires each time. Once again, with feeling: I say this is CREEPY.

This is to say nothing of the fact that Margo is not troubled at all by her first wish (gaining an ability which she never had talent before).[1. Perhaps just my opinion, but doesn’t that kind of wish-making kind of … well, cheapen the gains one gets from that ability? If a mediocre running back suddenly becomes Adrian Peterson, isn’t that cheating? I suppose it’s a matter of perspective.] Nor have I said anything about the similarities between this book and Rachel Caine’s Weather Warden series, which stars a professional warden (who is decidedly NOT a teenager), and who has a romantic relationship with a djinn. The Art of Wishing, to me, seems to borrow very heavily from Caine’s Ill Wind – especially in its ending. The only problem here is that The Art of Wishing isn’t nearly as good (I don’t hold this against The Art of Wishing as the Weather Warden series, despite its missteps, is one of my very favorite series’ of all time).

Which brings me to one of the two main issues I had with the book: the ending. I’m really, intensely uncomfortable with the way the book ends and the choice that this heroine makes (think… Twilight level badness). The series has just begun, so I’m not sure where Ribar will take this heroine, and what types of ramifications she might suffer for this choice, but I dearly hope there ARE consequences. As it stands, I’m very uncomfortable with this particular ending.

The second part of my dissatisfaction lies with the motivation for one character’s killing of ALL THE GENIES. It’s a lame reason. I won’t spoil it but… the mystery angle isn’t particularly well developed, let’s leave it at that.

Overall, The Art of Wishing is competent and charming at turns, but the thematic undertones and genie rules/worldbuilding in general make me extremely wary. I’m curious to see what happens next in the series, but I won’t be waiting on the edge of my seat.

The plan was this: I’d get up on that stage, blow them away with the best damn audition they’d ever seen, and walk out knowing the part I wanted was mine.

And when I was called into the auditorium, that was exactly how it happened.

I walked over to the piano and handed my sheet music to George. “You know this one?” I asked him.

He peered quickly at the title. Nodded and said, “Yup.” Of course he did. Silly question.

George flexed his fingers, and I strode up the little side staircase and onto the stage. Bright lights flooded my face, but I was used to that. I shielded my eyes so I could focus on the lone figure sitting in the first row: Miss Delisio, math teacher by day and play director by night. I smiled warmly at her. This was the woman who was going to cast me in my dream role.

Rating: I am torn when it comes to this book because somethings are done well, but some things are so problematic. I’ll stick with a 5 – Meh for now.