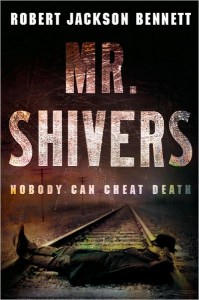 Why did I read this book: Ever since I saw the mockup of the haunting cover and read the synopsis from Orbit, I was instantly hooked. Billed as an apocalyptic-style horror novel set during the American Great Depression (one of my favorite periods of study as a history major), I could not resist.

Summary: (from Amazon.com)
It is the time of the Great Depression. The dustbowl has turned the western skies red and thousands leave their homes seeking a better life. Marcus Connelly seeks not a new life, but a death – a death for the mysterious scarred man who murdered his daughter. And soon he learns that he is not alone. Countless others have lost someone to the scarred man. They band together to track him, but as they get closer, Connelly begins to suspect that the man they are hunting is more than human. As the pursuit becomes increasingly desperate, Connelly must decide just how much he is willing to sacrifice to get his revenge.

Mr. Shivers was easily one of the most highly anticipated novels of early 2010 for me – the blend of horror, gritty realism, and the bleakness of the Great Depression setting instantly appealed to me, and I was ecstatic when I received an ARC for the title. Add to that the overwhelmingly positive reviews from the heavy-hitters like Publisher’s Weekly, the Guardian, and Library Journal, and I was one very excited girl.

Unfortunately, Mr. Shivers simply could not deliver. All sound and fury, but ultimately with little to say, I found myself hollowly disengaged and sadly disappointed with this debut novel from Mr. Robert Jackson Bennett.

Marcus Connelly (simply referred to throughout the book as Connelly) is a man that has lost everything. His young daughter has been killed by a mysterious, legend of a man whose face is marred by three long scars. Unable to move on with his life, Connelly’s marriage deteriorates, and he decides to leave to find – and exact revenge – on the gray man that murdered his daughter, the man that the hobos riding the rails call “the Shiver Man.” All Connelly knows is that he must travel west and he makes his way across an arid, devastated American landscape, from Tennessee to Oklahoma, hitching rides and stowing away on trains with other men in search of a better future. Along the way, Connelly learns that he is not alone in his quest as he comes across another trio of men out for blood, payment for the wake of death and destruction left in the scarred man’s path. As the group closes in their pursuit, hot on the Shiver Man’s trail, they gradually begin to realize he may not be any mere man – and Connelly learns, all but too late, that all revenge comes at an unimaginable cost.

Mr. Shivers is the debut novel from Robert Jackson Bennett, and it has a wicked good premise – at its onset, Mr. Shivers is a strong, attention-grabbing novel. The initial descriptions of the Depression-ravaged landscape, complete with Hoovervilles, dust storms, and the constant presence of the railroad are evocative and well-painted, as is the desolate, gray mood of the novel. Indeed, Mr. Shivers begins with a bang, banking on the strength of its morose setting. The historical perspective feels a little shaky at times (with regard to slang/colloquialisms and geography), but Mr. Bennett’s atmosphere in the novel is undeniably compelling. However, as the story unfolds, it’s very easy to see where it is going to end up. There’s a good deal of predictability here, which is unfortunate for so strong a start and premise (barely within the book’s first act, the old adage about those seeking monsters becoming them immediately comes to mind). This isn’t a particularly bad thing, provided that the characters and level of writing are strong. Unfortunately, they weren’t.

As a protagonist, Connelly is simply drawn. He’s a very tall & broad, intimidating, bearded man that does not like to speak. In many ways, he’s empty; a husk following the death of his daughter. This characterization is actually quite effective, at least in the beginning, but Connelly never manifests any semblance of a personality or tone as a character, nor do any of the other secondary cast members in the book (who read like flat stereotypes: an ex-priest, a Jew, a brash young man). There’s absolutely nothing in the way of character development here, which, unfortunately is another point against Mr. Shivers. This, however, would have been forgivable had the writing been impeccable…but once again, I found myself disappointed.

Mr. Bennett’s writing style, unfortunately, comes across as self-indulgent. Every conversation Connelly has in this book (or rather, that he listens to, as he does not speak much), every extended section of descriptive prose feels so melodramatically self-important as to seem…well, silly and derivative. For example,

He looked up at the stars again and considered this spot on the land, this tree he sat under. These empty square feet of land had always been here, would always be here. To this place he was no more than a dream. And he wondered about those who had come before, wandering over the plains, treading this spot. People that came before nature. Animals that came before sunlight. Perhaps it had been so. He touched the coarse earth. Once something had died here. It was a fact of chance. Some animal had dragged itself to this spot or many had fallen, limbs askew, its lifeblood leaking onto the earth. And then perhaps it had lifted its thoughtless eyes to the infinity above, looked at the endless, bejeweled dark, just as Connelly was now, and made some sound, some mewling cry. Asking a question. Begging for a few seconds more. And then expired, maybe leaving its questions behind.

This is perhaps a matter of personal taste, but the constant presence of these sorts of passages throughout the book were grating and felt amateur, the work of an author trying very hard to sound poetic and significant but failing, at least to me as a reader. I also found myself uncomfortable with some of the more religious and patriotic undertones to the novel, but this is, again, a matter of personal taste.

Mr. Shivers is also distinctly reminiscent of Neil Gaiman’s American Gods (Connelly is a character very similar to Shadow, and the traveling story and American backdrop is also very familiar), as it is of early Stephen King (in particular, The Gunslinger with Roland’s ages-old pursuit of The Man in Black versus Conelly’s Man in Gray). Unfortunately, Mr. Shivers lacks the resonance or skill of these two master storytellers, and the end result is something more derivative and bland. There are good ideas in this book, but Mr. Bennett stumbles, lacking in the execution of these ideas. The plot is cumbersome and the writing overwrought. I finished Mr. Shivers with an overall feeling of disappointment.

All these criticisms said, Mr. Bennett clearly does have promise as an author. This is only his debut novel (which probably accounts for the feeling that he’s trying too hard in this book), and there is potential here. Ultimately, Mr. Shivers isn’t a great book, but it’s not a terrible one either.

By the time the number nineteen crossed the Missouri state line the sun had crawled low in the sky and afternoon was fading into evening. The train had built up a wild head of steam over the last few miles. As Tennessee fell behind it began picking up speed, the wheels chanting and chuckling, the ?elds blurring into jaundice- yellow streaks by the track. A fresh gout of black smoke unfurled from the train’s crown and folded back to clutch the cars like a great black cloak.

Connelly shut his eyes as the wave of smoke ?ew toward him and held on tighter to the side of the cattle car. He wasn’t sure how long he had been hanging there. Maybe a half hour. Maybe more. The crook of his arm was curled around one splintered slat of wood and he had wedged his boots into the cracks below. Every joint in his body ached.

Additional Thoughts: Mr. Shivers has a pretty cool interactive website, which is definitely worth checking out. Also worth taking a look at is the haunting book trailer:

Verdict: Though I was eagerly anticipating this novel, Mr. Shivers failed to live up to the hype. Not without its merits, this is the type of book that may sing to some readers, but, unfortunately, I am not one of them. A plodding, predictable plot, flat characters, and overly-dramatic writing made this a forgettable read for me – though I will give Mr. Bennett’s future endeavors a try.

Reading Next: Need by Carrie Jones

Book Review: The Body at the Tower by Y.S. Lee