Guest Dare: Crocodile on the Sandbank by Elizabeth Peters

Welcome to our May Guest Dare. The Guest Dare is a Monthly feature in which we “dare” guest reviewers to read & review books outside of their comfort zones.

This month’s guest is our good friend Harry from Temple Library Reviews. who doesn’t like mysteries and usually doesn’t do “funny” – with these two bits of information, our single track brains immediately zeroed on the Amelia Peabody series.

We give the floor to Harry who will be reviewing Crocodile on the Sandbank by Elizabeth Peters. 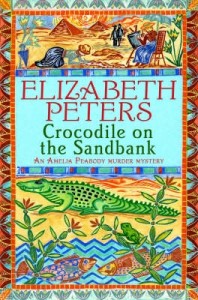 The Dare: I feel very lucky to be invited over another blog, which has never happened before, and I felt overjoyed when Ana, the cheeky little devil she is, propositioned me to participate in the Dare. This strikes as a sort of reviewer blog barter system, in which I give the girls their three days of royal party time on my blog and they would have me post a review for a book which is outside of my comfort zone. In what turned out to be a rapid succession of e-mails, I said ‘sure why not’ without thinking much, and soon a book was decided upon: “Crocodile on the Sandbank” by Elizabeth Peters.

The Author: It turns out that Elizabeth Peters is one of three alter egos of author Barbara Mertz. Mertz publishes nonfiction, whereas her pen names Elizabeth Peters and Barbara Michaels write mystery suspense and thrillers with a supernatural vibe, respectively. With 68 titles in total under her belt, you kinda start to think that there is a reason that MPM [as the author likes to refers to her multiple aliases] has managed to stay so long in the industry, and I am glad to confirm it as well.

The Plot: Set in 1884, this is the first installment in what has become a beloved bestselling series. At thirty-two, strong-willed Amelia Peabody, a self-proclaimed spinster, decides to use her ample inheritance to indulge her passion, Egyptology. On her way to Egypt, Amelia encounters a young woman named Evelyn Barton-Forbes. The two become fast friends and travel on together, encountering mysteries, missing mummies, and Radcliffe Emerson, a dashing and opinionated archaeologist who doesn’t need a woman’s help — or so he thinks.

The Review: Despite this being a novel written early in Peters writing career and a first in a series that stretches to 18 volumes, “Crocodile on the Sandbank” is a very enjoyable mystery novel with a humorous undertone. Considering that the author is born and bred in Illinois, I was delighted to find the distinctive Victorian manner of speech incorporated both in the narrative and conversations. This, packed along with the easily accessible, but not overly simplistic writing style, contributed to the believability of the story being told. You could imagine yourself sitting alongside Miss Peabody and enjoying a cup of tea.

And speaking of Amelia Peabody, it’s a good time to start off with the characters. The story is told through Peabody’s first person point of view exclusively, so the reader will see a whole lot of her character. I think that with the ever growing popularity of sarcasm, smartass punch lines and witty repartee wars in modern culture, many of the readers will be able to identify themselves with Amelia or at the very least like her. She represents the independent woman, which in Victorian society pretty much strikes horror in the hearts of British gentlemen and ladies alike. However she remains strong, stoic under strains and quite perceptive without crossing the line of what is believable, or what is just wacky fiction.

Her entourage also consists of likable characters, who are essentially more or less different from Amelia, but Peters achieves to create a fine balance, wherein weaknesses and strengths complement each other. Evelyn Barton-Forbes is a disgraced young noble with a flair for the dramatic and unmatched beauty. Her role, more or less, is to act as a contrast to Peabody among other things such as proving that love can overlook one or two mistakes in a very complicated social landscape. The brothers Emerson to me strike as the male equivalent of the Amelia–Evelyn duo, with the older one Radcliffe being the wild, commanding one with a shocking reputation as an agitator, whereas Walter is the calm artistic dreamer.

“Crocodile on the Sandbank” is a well written book, but I struggled with it through the middle up until the beginning of the buildup for the ending. The start was fun and promised dynamic travelogue encounters, but as the story progressed and there was no hint of a mystery I got a bit less interested a bit more bored. I realized that the author was planting clues and red herrings as in every good mystery books before the actual mindboggling puzzle comes along. Since I am no mystery fan, these subtle hints went unnoticed and for me the story was just some socializing and Egyptology themed scenes knitted together. This went on until an actual mummy walked and scared people.

From then on I was in heaven, since I had the slight hope that things will go either zombie related or at the very least Hitchcock-esque. Nevertheless, I wracked my brain who stood behind the walking bandaged villain and his motifs for wanting to kidnap young Evelyn. To avoid spoilers I skipped mentioning some of the back story and additional characters, lest a smarter reader figures it out. From my Scooby Doo fandom days I learned a valuable lesson: the culprit is always the most innocent and harmless looking character and I was I pretty much right at the very end, but without proper deduction. The mystery itself was awesomely crafted and nothing is left to chance here, which I always love to see in a novel, even if it has a slow buildup and the reader a much depleted pool of patience.

Nevertheless, the process of unmasking the villain offers quite the action and adrenaline rush with shooting scenes, casualties, kidnappings and the ominous mummy, which quite frankly remind me of the good old days, when Indiana Jones ruled. I had my skeptical moments and my bored moments, but overall this was an interesting diversion from what I normally read and quite frankly I have read far less well thought out and plotted books, so it’s a win-win.

Thank you Harry, for a most entertaining review of one of our favorite books! *Ana and Thea highfive over another one brought to the Dark Side*

Next Month: Our guest is Tia from Fantasy Debut who shall be reading a horror novel: Peter Straub’s Ghost Story. 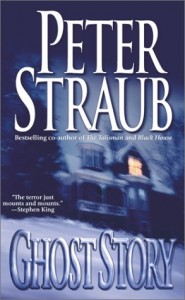 And Tia dared us back (the nerve) to read Fantasy classic The Once and Future King by T.H. White. 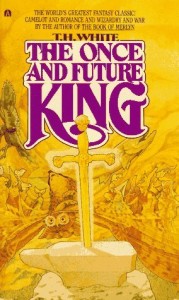