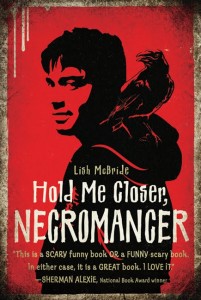 Sam leads a pretty normal life. He may not have the most exciting job in the world, but he’s doing all right—until a fast food prank brings him to the attention of Douglas, a creepy guy with an intense violent streak.
Turns out Douglas is a necromancer who raises the dead for cash and sees potential in Sam. Then Sam discovers he’s a necromancer too, but with strangely latent powers. And his worst nightmare wants to join forces . . . or else.

With only a week to figure things out, Sam needs all the help he can get. Luckily he lives in Seattle, which has nearly as many paranormal types as it does coffee places. But even with newfound friends, will Sam be able to save his skin?

Stand alone or series: Stand alone but could be the start of a series

Why did I read this book: Because it was shortlisted for the ALA’s William C Morris YA Debut Award this year.

Warning: this is going to be long and there will be spoilers.

College dropout Samhain “Sam” LaCroix leads a simple life: working at a fast food joint and hanging out with a close group of friends. Then one day his life turns upside down when he crosses paths with the local necromancer – a guy called Douglas, who recognises Sam as a fellow necromancer with latent powers. And all of a sudden an entire – hitherto hidden – supernatural world opens up for Sam. Unfortunately for Sam, Douglas is not the type of person who likes to share his territory. It starts with a terrible message brought by the talking severed head of one of Sam’s best friends with an ultimatum: he has one week to decide whether to join Douglas and work for him or face the consequences. One week to discover how come no one has told him he is a necromancer; one week to find out family secrets and who bound his powers up and why; one week to tap into his powers and learn to use them.

Meanwhile, villain Douglas carries on with his villainy by doing villainous things. One of them leads to the kidnapping of Brid, a young girl who is set to be the future Alpha of the local pack of powerful werepeople. Eventually Sam and Brid end up trapped in the same cage in Douglas’ basement.

In theory, I should have LOVED Hold Me Closer, Necromancer. It has several things I love: a snarky, self-deprecating, under-powered (at least to start with) lead character; a powerful, strong, independent female character; a surreal, quirky tone; necromancy, which if you ask me, is severely underrepresented in the supernatural world; a very cool focus on the friendships the main character has with his best buds Ramon, Frank and Brooke.

Yes, in theory I should have loved this book and yet…I didn’t. I had several problems with the novel: from the lack of a focused narrative and changing point of view AKA head hoping; lack of internal logic to the very tone of the novel which tried too hard for surreal and quirky and which I felt, missed the mark.

Starting with the narrative. It begins by alternating chapters from Sam, Douglas and Brid’s point of view which was cool to start with but then half way through the book, Brid’s point of view is COMPLETELY dropped and her entire storyline (involving being a hybrid of werewolf and fey and how that affects her life and that of her pack; her future as the alpha of her pack; her relationship with her father and brothers) forgotten. What was the point of having it, in the first place? Not only that, but towards the end of the novel, we start to get chapters from the point of view of other minor characters like Sam’s friend Ramon and even two seconds inside Sam’s mother’s head. It was simply too much and pointless, head hopping.

With regards to lack of internal logic: one of the main characters is the villain Douglas who shares some of the narrative’s point of view. Now, Douglas is REALLY EVIL. For some reason which we don’t know nor do we find out, he captures supernatural beings to “study” them, then he collects this data for…we don’t really know but I suspect that it is because he wants to steal their power although it is never really explained how he can do this. Anyways, he is the MOST POWERFUL NECROMANCER EVER (until of course, Sam comes along) and because of a combination of power + intelligence + cunning, Douglas managed to be the head of the local Council that regulates the local supernatural beings. The council includes powerful werewolves and witches. It is hinted that everybody fears him and that they know he is Up To No Good but no one does anything because well. I don’t really know why.

Anyways, Douglas has a lab in his basement where he conducts his “research”. At one point he sends one of his lackeys out to capture a hybrid for him to study and the guy (who is VERY stupid) comes back with Brid, the werewolf girl who is also the future alpha of the local pack. This is a huge mistake because there is now the potential for a huge diplomatic problem.

Later on, another necromancer from a different region manages to send a Harbinger[1. Who appears as a 10 year old catholic girl who loves waffles and this I guess, is supposed to be one of the quirky things about the book?] to help Sam and Brid when they are trapped in the cage in the basement of Douglas’ house – she comes and goes easily without getting Douglas’ attention even though he is a necromancer and she is a harbinger (the two types of being are supposed to have a natural affinity for each other). At one point, close to the ending, Brid escapes and hides in the basement, with the cage empty whilst Douglas is right there and doesn’t see this until too late (IS THIS A GIGANTIC BASEMENT?).

Douglas the villain, is either so powerful and all-knowing and relies on his super smarts to be the most powerful person around OR he is so stupid that he doesn’t know what is going on in his own basement and is surrounded by idiotic people because he doesn’t realise the importance of good lackeys! He can’t be both, can he?? Or else it doesn’t make sense – as it didn’t for me.

And finally there is the tone of the novel and the attempt at humour. Sam is the king of tirades and some of them were actually funny. But the overall tone just completely missed the mark for me – from Sam and his buds carrying the severed head of their best friend in a bowling bag to the Harbinger loving waffles, it just, I don’t know, it didn’t agree with me. I got the feeling I was supposed to find things quirky and surreal just because. I do appreciate that comedy is highly subjective though.

I wish I had loved Hold Me Closer, Necromancer but I can’t really say I enjoyed reading it.

Notable Quotes/ Parts: This is a notable quote not because I liked it but because it puzzles me: this is a sequence when Brid (who was kept naked to start with until Sam came along and let her borrow his tshirt and underwear) and Sam are trapped in the cage after being kidnapped by Douglas and they need to get close so they can be warm:

For the first time since I got there, I actually felt warm. I hadn’t slept next to a girl in a while. I’d missed it. But as good as it felt, I didn’t push it. I wouldn’t, however tempting it was, take advantage of my situation. After we got out, she’d better at least give me her number.

I believe the above is supposed to be funny? And we were supposed to see how much of a good guy Sam was for not taking advantage of the KIDNAPPED – UNDERDRESSED AGAINST HER WILL girl he was trapped with? Well, all I wanted was to punch him in the face for his sense of entitlement.

Additional Thoughts: The Morris Award is an annual award given to a YA novel by a debut author by the YALSA (part of ALA – American Library Association). 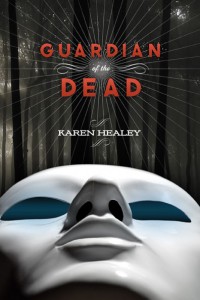 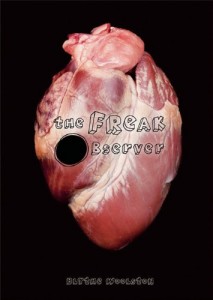 Guardian of the Dead by Karen Healey (read and LOVED it so much, it made my top 10 of 2010)
The Freak Observer by Blythe Woolston (the winner, I plan to read it really soon because it sounds awesome)
Hush by Eishes Chayil
Crossing the Tracks by Barbara Stuber

Plus of course, the one I just reviewed.

Have you read any of these books? Do you have a favourite?

Book Review: The Invisible Order – Book One: Rise of the Darklings by Paul Crilley