Book Review: The Last Will of Moira Leahy by Therese Walsh

Title: The Last Will of Moira Leahy 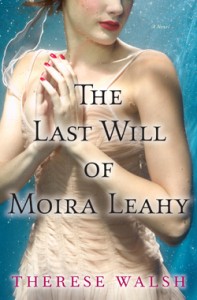 How did I get the book: Review copy from author

Why did I read the book: I don’t usually read “fiction” but I thought the cover was SO striking and the blurb so interesting that I had to say yes when the author offered us a copy.

Summary: A LOST SHADOW
Moira Leahy struggled growing up in her prodigious twin’s shadow; Maeve was always more talented, more daring, more fun. In the autumn of the girls’ sixteenth year, a secret love tempted Moira, allowing her to have her own taste of adventure, but it also damaged the intimate, intuitive relationship she’d always shared with her sister. Though Moira’s adolescent struggles came to a tragic end nearly a decade ago, her brief flirtation with independence will haunt her sister for years to come.

A LONE WOMAN
When Maeve Leahy lost her twin, she left home and buried her fun-loving spirit to become a workaholic professor of languages at a small college in upstate New York. She lives a solitary life now, controlling what she can and ignoring the rest—the recurring nightmares, hallucinations about a child with red hair, the unquiet sounds in her mind, her reflection in the mirror. It doesn’t help that her mother avoids her, her best friend questions her sanity, and her not-quite boyfriend has left the country. But at least her life is ordered. Exactly how she wants it.

A SHARED PAST
Until one night at an auction when Maeve wins a keris, a Javanese dagger that reminds her of her lost youth, and happier days playing pirates with Moira in their father’s boat. Days later, a book on weaponry is nailed to her office door, followed by anonymous notes, including one that invites her to Rome to learn more about the blade and its legendary properties. Opening her heart and mind to possibility, Maeve accepts the invitation, and with it, a window into her past. Ultimately she will revisit the tragic November night that shaped her and Moira’s destinies, and learn that nothing can be taken at face value, as one sister emerges whole and the other’s score is finally settled.

I am kind of lost on how to start this review. The Last Will of Moira Leahy is undeniably a good, solid debut novel although one that does not come without its flaws. But I guess I am rushing into the conclusion without even writing an introduction.

Maeve Leahy is a 25 year- old language professor who has closed herself off life ever since she lost her twin sister Moira 9 years ago. She has a strained relationship with the parents, specialty her mother whom she barely speaks with; she hasn’t returned home for years, refuses to play music which once was her heart and soul; she also avoids to think about the past or to consider a present and a future with Noel, her best friend who- could- be- something- else. For all intents and purposes Maeve is frozen in time, unable to look back, and remember, grief-stricken.

Then one day, whilst visiting an auction house, she sees a dagger that reminds her one her family had when they were little (and played pirates) and bids on it. The antique is in fact, a Javanese Keris, a sort of dagger said to possess special properties.

Once in her possession, strange things start to happen: someone leaves her weird notes urging her to remember ; a book with more information about the Keris is left at her office and an invitation to go to Rome to see a man who could have answers about the weapon. More insidious that these though, are the memories which start to crack her careful walls…..of music, of laughter, of … Moira.

Maeve then decides to take a chance and goes to Rome where she is met by Noel. There, they investigate the origins of the Keris, are pursued by someone who has “villain” branded on his forehead and eventually end up talking about the feelings they have for each other.

The story alternates between Maeve’s present, first person narrative and flashbacks to the past, from Moira’s point of view detailing the sister’s relationship from childhood to teenage years when tragedy occurs. Just how much tragic it is, we don’t get to see until very late in the story but yes, tragic is quite the perfect word for it. It is in these flashbacks that we learn of the twin’s deep connection and love; how very close they were with even a made-up language but also how very different they were; a difference which is continuously addressed by their mother in an attempt to make them unique individuals but which may well prove to be as much as a problem as if they were seen as the same. Then there is a boy and deceit and things turn really, really sour.

There are quite a few different elements in The Last Will of Moira Leahy, sometimes even too much. Family issues, the twin’s connection, the fact that Maeve is a musical prodigy; the plot itself is a mixture of mystery, and romance and suspense with added elements of supernatural and mysticism. Although most of them were woven seamlessly in the story and even the paranormal aspects, to my surprised worked, I think that perhaps, the author tried to do too much with the story and it just felt excessive to me. For example, on top of everything, there is ALSO the fact that Noel was in search of his mother who was a sufferer of abuse and perhaps only a bit crazy. The villain was way too villainous and that was a thread that interrupted the flow of the story.

But the main point is this: stripped to its bare essentials –a woman, suffering the loss of her beloved twin, having to look back at her past and simply remember so that she is able to open up to her own future – the story is effective, haunting, beautiful even. Maeve and Moira story is the painful, sad story of two flawed people trying to make the best out of their lives. Even the parents, especially their mother, were worthy of compassion. In fact, compassion and forgiveness are two themes central to the story. And Maeve and Noel’s romance totally pleased the romance addict in me. Therese Walsh has undoubtedly a lot of talent – although The Last Will of Moira Leahy was not everything I had hoped it would be, I envision a brilliant writing future for her.

“I lost my twin to a harsh November nine years ago. Ever since, I’ve felt the span of that month like no other, as if each of the calendar’s thirty perfect little squares split in two on the page.”

There is a great scene between Noel and Maeve in Rome when they go to the church of Santa Maria in Cosmedin and visit the famous Bocca de la Verita or the Mouth of Truth. It is said, that if you are a liar and put your hand inside the mouth , it will be chopped off. The moment in the book is a special moment of bonding between them when they first speak of truths to each other. The scene reminded me of two movies that I love, Roman Holiday and Only You. Remember those? 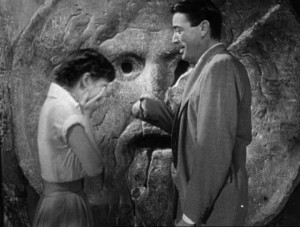 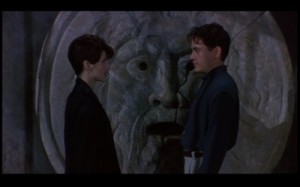 Unfortunately, as much as I love all of these, I suffer of something called Nitpickiness for I think that these scenes are actually impossibilities. Details, you see….they are the devil. Santa Maria in Cosmedin is a church that has odd opening hours, it is almost never open in the evenings and it has a closed gate after it is closed. It is also a church plagued with tourists, with buses parked outside at all hours and a long, looooooong line of tourists waiting to take a picture with their hands in the mouth. More often than not, chances are, you will have just about say, two seconds to take a picture before having to move before the next tourist moves in. There is no way, a long conversation could be held whilst standing there.

I know this, because I have been there more than 5 times. Sometimes I really do wish to just be able to let go and accept poetic licence.

Verdict: The Last Will of Moira Leahy is haunting, sad but with an eventual hopeful ending. Although the story has its excesses that made for an uneven read, the book is still an overall solid, effective debut work.

Rating: I am having a hard time rating the book. On one hand, the essence of the sad story, the characters, the evocative writing were great ,I would give it a 8. But the excesses, some of the details, are kind of too much, and I would give it a 6. On the whole, I think it stands right in the middle: