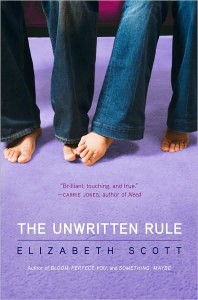 Everyone knows the unwritten rule: You don’t like you best friend’s boyfriend.

Sarah has had a crush on Ryan for years. He’s easy to talk to, supersmart, and totally gets her. Lately it even seems like he’s paying extra attention to her. Everything would be perfect except for two things: Ryan is Brianna’s boyfriend, and Brianna is Sarah’s best friend.

Sarah forces herself to avoid Ryan and tries to convince herself not to like him. She feels so guilty for wanting him, and the last thing she wants is to hurt her best friend. But when she’s thrown together with Ryan one night, something happens. It’s wonderful…and awful.

Sarah is torn apart by guilt, but what she feels is nothing short of addiction, and she can’t stop herself from wanting more…

Why did I read the book: I have seen great reviews of Elizabeth Scott’s books and I thought this was a good place to start to reading her books.

How did I get the book: I requested a review copy from the publisher.

A simple love story complicated by unfortunate circumstances: Sarah has loved Ryan forever but never acted on it for a series of reasons. But now, he is dating her best friend Brianna and being that much closer to him is making things even worse. It does not help that things don’t seem to be working that well between Ryan and Brianna and that Ryan and Sarah have so many things in common. And then one night, they kiss. And oh boy, it is everything she always wanted and more but what about Brianna, her best friend since kindergarten? She seems to love Ryan too – what can Sarah do?

I read The Unwritten Rule in one sitting and thought it was lovely although not without its problems. On the positive side, Sarah is a relatable character with a quirky voice, real emotions including the love for her cool parents, her love for art which she shared with Ryan and her friendship with Brianna which is a mixture of co-dependency and love. And Ryan is an absolutely a-do-ra-ble dork who so obviously liked Sarah as well.

On the not so positive side, even though the book is on the short side with just over 200 pages, there was still a feeling that the story was being unnecessarily dragged. As much as I had sympathy for Sarah and Ryan’ plight (if we can be so dramatic) and I felt the author did really get the psychological aspects to leap from the pages (I felt Sarah’s guilt as much as I felt her need to be with Ryan and his to be with her, you just can’t help but to root for the two of them) , it was also very clear that all was a matter of a simple conversation to be had. It was very, very frustrating to see that Ryan was so obviously not interested in Brianna at all and yet, why was he with her in the first place? It just didn’t compute with the fact that he was clearly a nice guy.

One of the most interesting things about the novel is how it is narrated by Sarah (first person, present tense with a few flashbacks) and how her narrative is tempered by her own view of things which are so evidently biased: not only by her own self esteem issues but also by her love for Brianna. For the reader though, who is not biased, and can see the other characters for who they really are, Sarah’s emotional journey is undermined by the fact that the reader absolutely knows where it is leading. And that is the greatest shortcoming of the novel: Sarah might have been blind to Brianna’s manipulative ways but the reader is not; and that removes from the equation what could have been the novel greatest strength: a true sense of friendship and guilt. Because the author takes the easy way out, by making Brianna the friend who is not really the good friend, therefore making it easier for the reader to side with Sarah and for Sarah to make a stand. Had it not been that way, the book might have been a great book, a fantastic book, with a real earth-shattering ending for all involved including the reader. As it stands it is a great coming of age for Sarah because Sarah does go through all the uncertainty of not knowing, of having to make a choice, of knowing that what she feels is both wrong and right but in the end I was left disappointed and with a sour taste in my mouth. At the beginning of the novel Sarah makes an astute observation that the sidekick best friend is always referred to in movies and novels as the loser or the funny friend. It is ironic how in the end the roles were reversed and the other best friend ended up with the role of the Bitch so that the sidekick could come up on top. Surely, we can have two good girls in one book, none of them stereotypes, both deserving happiness?

Rant aside, overall I actually enjoyed the novel, the chemistry between Ryan and Sarah and I thought the writing was first rate:

“Thanks,” I said, although I’m betting it sounded more like “Geratyuhrh,” and then I reached for the book and he gave it to me, his hands touching mine for a moment.
And then he said, “Sarah,” and touched my hand again. I looked down. My fingers were spotted with the dark green my father had wanted the garage painted, and his hands were spotted too, white and yellow, and the book slid to the floor as he did more than touch my hand. He held it, he slid his fingers into mine.
Our palms pressed together, and all I could think of was a line I’d read somewhere, about palms pressed together like a kiss, and he was still looking at me and then we were standing up, still holding hands, and he was close, so close and he was leaning in and I couldn’t breathe, couldn’t move, could only watch and wait, hoping and breathless as he moved close and closer and –

I definitely want to read more by Elizabeth Scott.

I am caught in a huge tangle I don’t know how to get out of. I want Ryan, but I don’t want to lose Brianna.

I open the door. Maybe it really can all work out. People have been to the moon and cured diseases and found ways to inject cream into snack cakes.

But that stuff doesn’t involve love. Or how you have to open the door to your crying best friend and know that you love her, you want to be there for her – but that you’ve done something that would make her cry too.

Additional Thoughts: Elizabeth Scott seems to have an interesting backlist – a mixture of light romance novels and more hardcore dramatic ones: 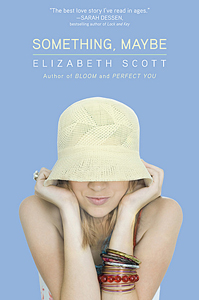 Everyone thinks their parents are embarrassing, but Hannah knows she’s got them all beat. Her dad made a fortune showing pretty girls–and his “party” lifestyle–all over the Internet, and her mom, who was once one of her dad’s girlfriends, is now the star of her own website. After getting the wrong kind of attention for far too long, Hannah has learned how to stay out of sight…and that’s how she likes it.

Of course, being unknown isn’t helping her get noticed by gorgeous, confident Josh, who Hannah knows is her soul mate. Between trying to figure out a way to get him to notice her, dealing with her parents, and wondering why she can’t stop thinking about another guy, Finn, Hannah feels like she’s going crazy. She’s determined to make things work out the way she wants….only what she wants may not be what she needs. 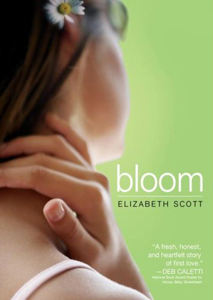 Lauren has a good life: decent grades, great friends, and a boyfriend every girl wants. So why is she so unhappy?

It takes the arrival of Evan Kirkland for Lauren to figure out the answer: she’s been holding back. She’s been denying herself a bunch of things (like sex) because staying with her loyal and gorgeous boyfriend, Dave, is the “right” thing to do. After all, who would give up the perfect guy?

But as Dave starts talking more and more about their life together, planning a future Lauren simply can’t see herself in– and as Lauren’s craving for Evan, and moreover, who she is with Evan becomes all the more fierce–Lauren realizes she needs to make a choice…before one is made for her.

Have you read any of Elizabeth Scott’s books? Do you like them? Which should I read next?

Verdict: This book has some lovely writing and a sympathetic protagonist and a couple with real chemistry to root for. It is a shame that the tension of the main plot is moot and undermined by a cop-out.