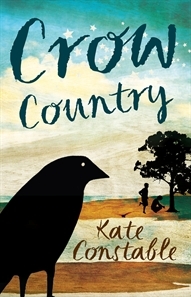 From the author of the Chanters of Tremaris series comes a contemporary time travel fantasy, grounded in the landscape of Australia Beginning and ending, always the same, always now. The game, the story, the riddle, hiding and seeking. Crow comes from this place; this place comes from Crow. And Crow has work for you.

Sadie isn’t thrilled when her mother drags her from the city to live in the country town of Boort. But soon she starts making connections—with the country, with the past, with two boys, Lachie and Walter, and, most surprisingly, with the ever-present crows. When Sadie is tumbled back in time to view a terrible crime, she is pulled into a strange mystery. Can Sadie, Walter, and Lachie figure out a way to right old wrongs, or will they be condemned to repeat them? A fantasy ground in mythology, this novel has the backing of a full consultative process on the use of indigenous lore.

Why did I read this book: I’ve had this book on my radar for a while for two reasons: 1) Time travel. 2) A fantasy novel based on Australian Aboriginal mythology. It sounded too good to be true. It was.

So today I was supposed to be reviewing The Stillness of Time Travel a self-published novel by A.J. Maddicott. I learnt about the book at Foyles (The Best Indie Bookstore in the UK), which is one of the few bricks and mortar bookstores to sell the book because they love it so much. I had to buy it there and then and the book had been sitting on my TBR for a while until I decided it was about time to read it. And the premise is pretty cool: young boy learns that he can travel in time (the idea is that many people can, in fact, time travel by slipping though time in the stillness of those near-sleeping moments) and then goes back to Victorian London where he will take part in the theft of the world’s most famous diamond, the Star of Banhavgarh.

The problem is, 200 pages (out of 412) into the book and nothing had really happened and I was just bored out of my mind. And you know when you are reading a book and you keep willing it to be good because you truly think there is potential there? It didn’t work (does it ever?). It got to a point where I had to decide whether I kept reading or tried something else and I decided to go with trying something else and I had Crown Country by Kate Constable, this other time travel book sitting on my (virtual) shelf. That book came highly recommended what with its credentials of winning the 2012 Children’s Book Council of Australia (CBCA) Book of the Year Award – Younger Readers and being shortlisted for the 2012 Adelaide Festival Awards for Literature Children’s literature award as well as the 2012 WA Premier’s Literary Award.

Big mistake. Because Crow Country made me angry and man, I should have stuck with boring. It would have been better for my blood pressure.

Basically, the book is a time-slip fantasy featuring a 13 year old white girl named Sadie whose mother decided to move to a small town called Boort, in Australia. She is not very happy about it but has no choice bla bla bla Contemporary YA clichéd set up we all know, etc. Nothing new to see here.

In Crow Country, white protagonist Sadie finds the remains of a sacred circle of stones that used to belong to the Yung Balung Clan for thousands of years until it was taken over by a family of white farmers 150 years ago. When she steps into that stone circle, she learns that it’s Crow’s place and she is then able to understand what the crows that are so abundant in the place are saying. Crow tells her then that he has “work” for her to do. She then slips back in time into the body of an ancestor to witness the murder of an Aboriginal man named Jimmy Raven years and years ago, who was then buried in secret. He was killed by the white man who owned the piece of land where there were sacred remains of Aboriginal people which Jimmy was trying to protect. Sadie’s ancestor covered up the murder. The story progresses back and forth in time and Sadie learns that she must right the wrongs of the past and with the help of a young Aboriginal man called Walter she finds out that she needs to restore peace to the memory of Jimmy Raven. At the same time, in Real Time Australia, Sadie and her mother are first-hand witnesses of racism as her mother hooks up with childhood sweetheart David, an Aboriginal man (Walter’s uncle).

I can see the good intentions behind this story, I truly can. It depicts racism as a Bad Thing, it praises Integration and Friendship Among Races, it shows the complex racial relations in modern day Australia as well as the connections to the land that both Aboriginal and non-indigenous people share (although if you ask me, I’d say that thousands of years of connection trumps a couple of hundred years anytime but that’s just me). The elements of Aboriginal culture and spirituality seem to have been researched carefully as evidenced by the foreword provided by an Elder of the Yung Balug Clan praising the story as one of collaboration.

For me though, the problem is not how those good intentions and elements above were depicted because they seem to have been done so with respect and after careful research. The problem is how and why those elements where incorporated into the story. The problem is the focus of the story.

Because you see, it is all about the whites. This is a story in which a white heroine is chosen by the totem of an Aboriginal Clan to right wrongs of the past. Because for some reason she is the only one that can do it even though she is friends with an Aboriginal boy who is actually a descendant of the murdered man and someone who shares the same religious beliefs as Jimmy did. “To right wrongs of past” by the way, does not mean revealing that the person who murdered Jimmy Raven was a white man and a pillar of society – and tell everybody the truth about him. No, it means only finding out where Jimmy’s body rests so that they can mark his burial place and also find his sacred object and return it to his Clan.

Speaking of Jimmy, he is described by Sadie as a friendly man, “no one to be frightened of” with a “deep rolling laugh” and “too big for the small kitchen” and a religious man with “special” powers and special connections to the land. Ladies and gentleman, do I spot a Magical Negro? No, I actually spot TWO: because there is yet another secondary character that shows up only to impart her wisdom and help the white protagonist find her way.

So to recap: even though the main plot point of this story is to find out where this Aboriginal man is buried and rescue his sacred object in order to return it to his clan, all of the Aboriginal characters in the book are secondary appendixes to the White Saviour heroine’s Path of Glory. It is actually scary how oblivious this story is with regards to how it chooses to focus the story on the White People’s Plight. I mean, even the scenes where Sadie and her mother witness racism first-hand it is all about them, how it is hard for them, and how they are so special when they manage to help bridging the relationship between Blacks and whites in the novel.

The most glaring example of this is how Sadie’s mother rekindles her relationship with old sweetheart David and then proceeds to browbeat him into being more sociable. She insists he should go out with her to the pub (where people menacingly react to his very presence) and that he should work together with a guy who in the past, beat him up almost to death. He does not want to do any of those things but in the end, complies. There is also another secondary character, a white boy Sadie kind of fancies and who is not only a racist jerk but also at times, a seemingly dangerous one. But in the end, because the Aboriginal people opened themselves up to it, guided by the two main white characters, a magical and beautiful flower of friendship develops between them and everybody. Even though there is no actual character development whatsoever to make it even remotely believable that such obviously racist characters suddenly become enlightened and are surprise!Not Racists!

But you know, the book won awards and shit so I don’t know anything anymore.

“The Dreaming is always; forever… it’s always happening, and us mob, we’re part of it, all the time, everywhere, and every-when too.”.

Reading Next: LOADS OF HORROR books for Halloween Week.