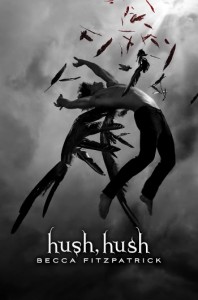 Stand Alone or series: first in a planned duology

Why did I read the book: I love the cover and the premise. Plus the hype surrounding the book.

How did I get the book: I received an ARC from the publishers in the UK.

A sacred oath, a fallen angel, a forbidden love…This darkly romantic story features our heroine, Nora Grey, a seemingly normal teenage girl with her own shadowy connection to the Nephilim, and super-alluring bad boy, Patch, now her deskmate in biology class. Together they find themselves at the centre of a centuries-old feud between a fallen angel and a Nephilim…Forced to sit next to Patch in science class, Nora attempts to resist his flirting, though gradually falls for him against her better judgment. Meanwhile creepy things are going on with a mysterious stalker following her car, breaking into her house and attacking her best friend, Vi. Nora suspects Patch, but there are other suspects too – not least a new boy who has transferred from a different college after being wrongly accused of murdering his girlfriend. And he seems to have taken a shine to Nora…Love certainly is dangerous…and someone is going to have to make the ultimate sacrifice for it

A warning: this review contains spoilers. You have been warned!

There has been great hype and positive reviews over Hush, Hush until last week when a couple of negative reviews started to surface. After reading the latter, which had some well-thought out criticisms, I braced myself not to like the book as much as I hoped but I was not prepared for what I eventually got. Suffice to say that: the cover of the book is awesome. And that is just about as positive as this review is going to get.

The plot is simple: Nora Grey is the uncoordinated, plain girl who walks into Biology class one day to find out that the teacher wants to shake things up by moving the kids around. Instead of sitting with her best friend Vee as per usual, Nora ends up sitting next to the new kid, Patch. The dark, hot, mysterious Patch whom as soon as Nora sits next to him, starts to tease, argue, behaving like a jerk to Nora. Then, weird things start to happen, Nora believes she is being watched; someone jumps in front of her car when she is driving home one day and almost rips the door out. She immediately thinks that Patch is behind those incidents. She notices that everywhere she goes, he is there. More weird things happen, Patch can put thoughts inside her mind, he has a scar in his back. An internet search is in order: “angel wing scar” she types and is frightened that OMG Patch may not be human. She fears him, he is certainly dangerous, can she trust him? But yes. But no. But he is hot. But he is dangerous. He loves her! She loves him! He saves her from himself (he wants to kills her!) and from the dangerous lunatic who wants revenge. The end.

The first question I have for you dear reader, is this: How is this book NOT Twilight by Stephenie Meyer but with Angels? It is uncannily similar. But unfortunately, it is also worse than Twilight. (Take that as you will.)

Starting with the characters. Patch has been hailed as the Ultimate Bad Boy by some or as a Stupid Jerk by others. In all honestly, I could not care one iota for Patch: I have seen better Bad Boys and worse Jerks. He falls right bang in that middle ground of mediocrity. One thing is certain, I don’t see the attraction and I didn’t see any chemistry between the characters.

Now, Nora. Nora, Nora, Nora. I have yet to see a worst TSTL (Too Stupid to Live ) heroine. Let me count the ways: Nora is attacked or followed or stalked. Over and over again. Yet it never occurs to her to call the police, talk to the school principal, talk to her mother until it is too late. She talks with suspect number one instead. She is afraid of Patch for most of the book and keeps changing her mind about him every two seconds. It gets tiresome pretty soon:

He is hot. But he is dangerous. Can I trust him? But his dark smile and dark eyes! OMG he wants to kill me! But he smells good!

Then her best friend is attacked by someone who mistakes her for Nora. Vee ends up in hospital, having surgery. They think it might have been Patch attacking her. One DAY later she is out of the hospital (without the police ever questioning them about the attack. No sign of the parents in the hospital either) so that they can go to the bar where he works to do some sleuthing (their words). This pinnacle of stupidity that is Nora, goes into the bathroom to put on a wig, a hot dress and gets a LIST of questions out of the pocket to ask the bartender. Her questions:

No, seriously. I ask myself if this is supposed to be cute or quirky. I ask myself if I shouldn’t just walk away from the book before my brain explodes or my eyes get stuck in the back of my head after that much rolling! I carry on though because I want to know how this is going to end and I am mildly curious about the Fallen Angels Mythology. I guess that counts as a positive too? That I want to know more? But I wish I hadn’t because once all is explained, it lacks inherent logic.

This is where things get really spoilery so avert your eyes now if you don’t want to know.

Firstly, Nora does her internet search and THE FIRST PAGE SHE OPENS after typing “Angel Scar Wings” is the correct page which relates this specific obscure mythology, because that is exactly how it happens when you Google something. Patch is supposed to be a Fallen Angel who wants to become human. He says he “found” the Book of Enoch that says there is a way of doing this if he sacrifices a descendent (that would be Nora, by the way) of the guy who swore fealty to him because that would kill the GUY and that would make him human. How exactly did Patch find the elusive Book of Enoch, if he was out of Heaven? How exactly does killing Nora kill her ancestor?

In addition: Patch is a BAD person because he Fell. And he fell because of lust for a woman he loved. At the end of the novel, he becomes an angel again and yet he proceeds with a relationship with Nora which is of course, based on lust as well. Isn’t that the same situation as before? Shouldn’t he fall again? This is completely illogical!

In the end I am supposed to believe these two loved each other so much they would sacrifice for one another. And yet. how can I possibly believe that, if every single interaction they had in this book is Patch being a jerk, and Nora reacting to his jerkiness? They hardly ever had an entire conversation that did not go around one of them doing or saying something nasty. I absolutely abhorred the fact that Nora was prepared to give up her life so easily so that Patch could become human. It’s not even about saving his life, only granting his wish.

So, yeah, Hush, Hush did not work for me in any level and I am most aggravated about it.

Verdict: This book did not work for me at all. And it is time that the Twilight train left the station.

Rating: 2 – A complete waste of my time.

Reading Next: Austenland by Shannon Hale