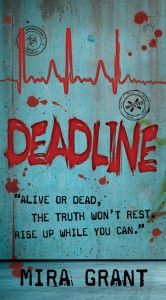 Shaun Mason is a man without a mission. Not even running the news organization he built with his sister has the same urgency as it used to. Playing with dead things just doesn’t seem as fun when you’ve lost as much as he has.

But when a CDC researcher fakes her own death and appears on his doorstep with a ravenous pack of zombies in tow, Shaun has a newfound interest in life. Because she brings news-he may have put down the monster who attacked them, but the conspiracy is far from dead.

Now, Shaun hits the road to find what truth can be found at the end of a shotgun.

Stand alone or series: Book two in the Newsflesh series

Why did I read this book: I truly enjoyed Mira Grant’s first Newsflesh novel, Feed and her take on a radical post-zombie apocalypse world, in which bloggers (!) emerged as the bastions of truth and justice and the American Way. Feed ended with a hell of a donkey punch, so, naturally, I was thrilled to pick up Deadline and continue the story.

**NOTE: THIS REVIEW CONTAINS UNAVOIDABLE SPOILERS FOR FEED. IF YOU HAVE NOT READ BOOK 1 AND WISH TO REMAIN UNSPOILED, LOOK AWAY! You have been warned.**

It has been a year since the drastic events that concluded Feed. A year since Shaun has had to kill his beloved sister George with a shot to the spine after she was injected with a live dose of Kellis-Amberlee and began to amplify. A year since life has stopped to hold any meaning for Shaun and his news team, and Shaun has officially began to go crazy and talking to the voice of his dead sister in his head. They say the pain is supposed to go away and fade over time, but for Shaun Mason, nothing could be farther from the truth. The only reason his grief hasn’t fully consumed and led Shaun to death is for the single fact that he owes George the truth – and he’s vowed to find out who was behind the murder of his sister and bring them to justice. Although he has this single-minded purpose, Shaun hasn’t been able to make any headway in the investigation and has lost himself to listlessness. Now, aimless and practically retired from all Irwin fieldwork, Shaun is content to run the team from behind the scenes until CDC reserarcher Doctor Kelly arrives at his team’s doorstep, begging for help and sanctuary. Turns out, the chipper young Kelly has faked her death at the CDC because she has uncovered a secret that could blow the lid off of everything – and also shed light on George’s murder.

With a government conspiracy of this magnitude, though, breaking the news could be fatal, and Shaun and his group of bloggers find themselves in a deadly race for their lives. It’s up to Shaun to rise up to the challenge.

Like many other reviewers and readers, I have mixed feelings about Deadline. I know, certainly, that I didn’t enjoy this book as much as I did Feed, although there are enough things done well that make Deadline worth the read. Hell, it’s a good book – but it’s not without its significant stumbling blocks. What Deadline did have going for it, like Feed before it, was the painstaking amount of detail and research that went into the imagining of Kellis-Amberlee and the medical thriller/conspiracy aspect of the book. Mira Grant is not one to shy away from detail or cut back on background, and the level of intricacy that the author uses to describe the genesis, mutation, and virological properties of the chimera/rhinovirus that brought on the apocalypse is nothing short of pure awesomeness. In Deadline, the CDC plays a much more central role in the story with nefarious undertones – yes, it’s clear who the bad guys are from the start of the book (governments and government organizations are ALWAYS evil), but the medical thriller aspect of the book unfolded in a tantalizing and highly enjoyable way.

As with its predecessor, I remain impressed with the level of worldbuilding in this Newsflesh universe, and I like that humanity has found (at least temporarily) a way to coexist with an ever-present virus that could decimate the population at any time. The blood tests, the bleach baths, the level of bureaucracy, the constant terror that people must live with are all wonderfully imagined and decidedly unique (almost every zombie book/film/comic I’ve ever seen involves Mad Max-esque wastelands, not an emergence of hi-tech neo-totalitarianism).

Unfortunately, there were a number of things that hampered my enjoyment of this book. The first thing to note is that Shaun isn’t nearly as compelling a narrator as (adopted) sister George. Deadline begins strong with Shaun’s grief as fresh a year after George’s death as it was the day he had to kill her, and Shaun is so pushed to the brink by this loss that he actually holds conversations with George in his head. And out loud. And even in person, at some points. While this makes for a fascinating character study initially, over the course of 600 or so pages, it gets annoyingly repetitive. Shaun’s interactions would go something like this: someone makes a comment, George comments on the comment, Shaun vocally tells George to hush, everyone looks at Shaun like he’s crazy, Shaun titters and waves it off as “Yes, I’m crazy, that was George, she says hi.” Lather, rinse, repeat. In fact, the extent of Shaun’s characterization was defined by this grief, his crazy conversations with his lost sister, his incessant drinking of coca cola, his motorcycling around, his baring his teeth in weird scary smiles, and his fervent desire to punch everyone in the face.[1. I swear with Beelzebub as my witness if I have to read another line about Shaun popping the tab off a coke, bitching about the saccharine sweet carbonation and comparing it to a Candyland Whore one more time, I will punch HIM in the face. You know, in my head.] Needless to say, Shaun is not nearly as nuanced as his sister. I don’t hold this against him, but the level of monotonous repetition worked against the parts of Deadline that actually did work, and took away from my enjoyment of the novel.

On that same subject, from another writing-voice perspective I liked all the swearing and the guns and general badassness in this book, but at the same time it’s a little hard to swallow because all the characters speak in the same way (the emails from the good doctor Abbey, for example, sound exactly like Shaun), and that’s kind of frustrating.

Of course, the biggest bone of contention lies in one huge jaw-on-the-floor revelation made in the late chapters of the novel. I won’t spoil, but I will say that the revelation came out of left field and did not seem to hold any integrity with the first novel.[2. If you’ve read the book and want to discuss in the comments, feel free – but PLEASE spoiler tag EVERYTHING.] I don’t mind the revelation for what it is, but it bothers me in that it felt gratuitous and played for shock value, as opposed to a natural development. That is, this monkeywrench did not sit well given George’s prior narration.

In that vein, many of the plot developments in Deadline were less…organic than those in Feed. While the first book employed twists effortlessly and built towards a dramatic conclusion that never once wavered towards contrivance, Deadline depends more on huge, hulking twists that bordered on the melodramatic. It’s a fine line between mind-blowingly cool Season -1-LOST-WTFPOLARBEAR-ness and Season-6-LOST-We-live-in-a-magical-floating-island-with-a-LIGHT!-silliness, and the end of Deadline unfortunately strayed towards the latter. I’m intrigued by the big ol’ surprise ending – but I’m also a little worried because when plots need huge deus ex machina sorts of devices to bail them out, I fear that the story has gotten away from the writer. Also, the strongest elements of the Newsflesh books are the scientific detail and worldbuilding, and the ending of Deadline is rooted in science fantasy. I have no problems with fantasy technology – but to date this series has been so grounded in plausibility that I fear the conclusion of this penultimate book is a huge Jump The Shark moment. I continue to hope for the best and for explanation in book 3, Blackout, though.

Despite my gripes with the narration, repetition, and hard-to-swallow twists, Deadline is a hell of a ride, filled with fascinating nuance about the origins and proliferation of KA and what it means for the future of humanity. I’ll be around for book 3, with hopes that Ms. Grant can capture that awesome realism and tension from Feed once more.

Notable Quotes/Parts: Using Hachette’s OpenBook platform you can read an excerpt of the first three chapters online using the widget below, or by clicking HERE.

Reading Next on Orbit Zombies Attack!: Flip This Zombie by Jesse Petersen