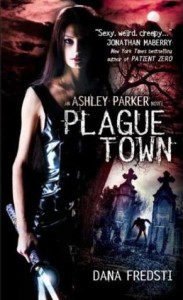 In the small university town of Redwood Grove, people are succumbing to a lethal strain of flu. They are dying—but not for long.

Ashley Parker and her boyfriend are attacked by these shambling, rotting creatures that crave human flesh. Their lives will never be the same again.

When she awakes Ashley discovers that she is a “wild card”—immune to the virus—and is recruited by a shadowy paramilitary organization that offers her the chance to fight back. Fatally attracted to her gorgeous instructor, and bonding with her fellow wild cards, Ashley begins to discover skills she never knew she had.

As the town falls to ever-growing numbers of the infected, Ashley and her team fight to contain the outbreak—but will they be enough?

Stand alone or series: Book 1 in the Ashley Parker series

Why did I read this book: So, as you know, I’m a zombie fan (who isn’t? I’ve even converted horror-phobe ANA to zombie fandom!), and recently The Walking Dead closed out its phenomenal second season. This means that there has been a brains and other assorted viscera deficiency in my diet as of last week, and I need to fill the gap with something. Enter Plague Town. A zombie apocalypse as backdrop for a new urban fantasy heroine sounded like the perfect fix for my Walking Dead withdrawal.

Twenty-nine year old Ashley Parker has her life finally heading in the right direction. She’s busted out of an unhealthy marriage to a control freak of a husband and has decided to return to school to earn her undergraduate degree (so what if she’s older than everyone in her classes?). Ashley’s new lease on life also means that she’s happily taking classes in whatever field she wants (including a class on the history of pandemics), and that she’s enjoying herself, particularly with her new hot but perhaps not so bright boyfriend, Matt. One quiet evening when the couple is enjoying a romantic picnic and make-out session on campus, they are rudely interrupted…by a horde of undead zombies. Things don’t go so well for Matt or Ashley – the last thing Ashley remembers is getting a huge hunk of her arm ripped out by a rotting corpse before passing out from the pain.

When she awakens, she’s in a strange room, with her History of Pandemics Professor, of all people. It turns out that Ashley is one of the 0.001% of the population that is immune to zombie infection – a “Wild Card”, as they like to call themselves. Not only is Ash immune to bites, scratches, or other zombified bodily fluids, but her senses, strength, and agility have been increased as a result of her body’s fighting off the infection. Because of this unique immunity and the subsquent physical perk, Ashley and her fellow Wild Cards are prized, highly-sought out civilian recruits for the US Military. As it turns out, zombie outbreaks have been happening routinely throughout history, and high levels of government know, prepare, and have been fighting against uprisings since ancient times. Given everything that has happened to her, Ashley willfully agrees to work with the military group to stop the onslaught of zombies that is quickly overwhelming the quiet college town of Redwood Grove.

As the zombie horde increases in size, Ashley and her fellow Wild Cards find themselves in way over the heads. And with secrets at every turn – from the nature of certain Wild Card immunity to the truth of the latest zombie outbreak – Ashley and her new friends must think quickly if they are going to survive.

The first book in a new Urban Fantasy series from author Dana Fredsti, Plague Town is a diverting, entertaining zombie siege novel – complete with all the delicious bone-crunching, blood-gushing awesomeness a zombie lover could ever want. I was looking for a substitute to fill the Walking Dead sized hole in my week, and I’m happy to say that for the most part, Plague Town delivers.

On the premise and world-building side, Plague Town is a solid and memorable experience. I love the idea of an Urban Fantasy series that revolves around an honest-to-goodness zombie apocalypse – a conceit that is used far too sparingly in the sea of werewolf/vampire/fey/etc UF series on the market – and I love the introduction to this strange new world in which some humans are immune to the zombie virus. The setting, in a sleepy Northern California college town, is also a brilliant choice, ever so slightly reminiscent of the awesome ’80s b-horror classic Night of the Creeps. Add to this the creation of a civilian-operated military cell with the Wild Cards (a sort of zombie-eradicating league of ragtag ordinary people-cum-badasses), and you’ve got a pretty sweet party.

These strengths said, there are some drawbacks that prevented the book from transcending “fun” to something deeper and more resonant (this novel isn’t on par with Mira Grant’s Newsflesh books, for example). As far as story goes, the actual development of plot takes a backseat to action – not a bad thing by any stretch of the imagination, as the action and fight scenes are expertly written and a blast to read. Simply put, there’s a marked lack of any deeper message or gravitas. Additionally, as is the downfall of many an Urban Fantasy heroine, there’s also the overdose of snark injected into the first person narrative. I’m not a huge fan of one-liner overkill, and Ashley’s narrative is chock-full of them, which become increasingly unfunny with each subsequent quip. Additionally, while awesome pop-culture references abound (see “The Ripley Syndrome” and why one should never go back for a cat – and then why that theory is bogus because Ripley survives), these again could be too frequent, feeling more forced than clever.

Finally, an Urban Fantasy novel is only so strong as its leading man or lady, and Plague Town‘s heroine, Ashley Parker has her ups and her downs. Slightly abrasive and with a tendency towards over-snark (as mentioned above), Ashley starts out the book feeling like your familiar everyday chip-on-her-shoulder UF heroine. Thankfully, there are moments where Ashley breaks away from one-note UF badass to an actual layered character that is both smart and strong. While there’s a requisite romance between Ashley and one prickly character that unfolds in a familiar way, there was one interaction between them that made me fall in love with Ashley, despite the abundance of her other typical UF heroine-itis symptoms. Observe this one scene, after an impromptu hookup in the bathroom, when said love interest lost all control and thrusts himself upon our (willing) heroine:

I would have fallen over if I hadn’t been leaning against the wall. My breathing ragged, I stared at him.

His breathing was a little choppy, too, as he spoke.

“What the fuck?” Or not, as it seemed. Frustration made me blunt. “What the hell SHOULD have happened?”

What, and I CAN? I thought angrily.

“So it’s not okay for Mister ‘I’m better than everyone else,’ but it’s something you’d expect from the slut,” I countered. Hurt wrestled with anger. “Thanks, but no thanks, Gabriel.”

HALLELUJAH. If you’ve read a few paranormal or UF novels from the past few years, the alpha male pulling back because he “can’t lose control” is a familiar phenomenon. How often do you hear a heroine calling out the hero for this crap, though? Not nearly often enough – and I adored Ashley’s response. There are other glimmers of awesomeness that make Ashley a compelling heroine, including her genuine empathy for other Wild Cards and her brutal honesty, and it’s certainly more than enough to make up for any other shortcomings in the book.

Overall, I truly enjoyed Plague Town and I will certainly be back for more. Recommended, especially for fans looking for a different type of Urban Fantasy.

Notable Quotes/Parts: No excerpt, but you can check out the great blog post author Dana Fredsti wrote for The Huffington Post on the evolution of zombie culture, if you’re so inclined.

Reading Next: Tankborn by Karen Sandler