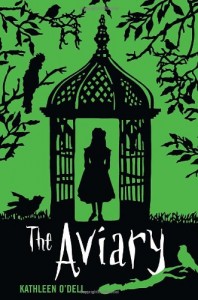 Twelve-year-old Clara Dooley has spent her whole life in the Glendoveer mansion, where her mother is a servant to the kind and elderly matron of the house. Clara has never known another home. In fact, she’s confined to the grand estate due to a mysterious heart condition. But it’s a comfortable life, and if it weren’t for the creepy squawking birds in the aviary out back, a completely peaceful one too.

But once old Mrs. Glendoveer passes away, Clara comes to learn many dark secrets about the family. The Glendoveers suffered a horrific tragedy: their children were kidnapped, then drowned. And their father George Glendoveer, a famous magician and illusionist, stood accused until his death. As Clara digs deeper and deeper into the terrifying events, the five birds in the aviary seem to be trying to tell her something. And Clara comes to wonder: what is their true identity? Clara sets out to solve a decades-old murder mystery—and in doing so, unlocks a secret in her own life, too. Kathleen O’Dell deftly weaves magic, secret identities, evil villians, unlikely heroes, and the wonder of friendship into a mystery adventure with all the charm of an old fashioned classic.

Why did I read this book: Good Books and Good Wine’s April highly recommended it on her Smugglivus’ post last year. I’ve had it on my radar ever since and when I was visiting The Strand during BEA this year, I came across it and bought it.

Oh my, The Aviary is lovely.

It’s the beginning of the 20th century and 12-year-old Clara Dooley lives in the decaying Glendoveer mansion where her mother is the housekeeper. Clara has a serious heart condition that prevents her from ever going outside, attending to school or having friends – she is simply not allowed to exert herself. She has always felt comfortable with her life and for the most part Clara is an obedient, happy young girl who loves spending time with her mother, the cook Lucy and the elderly Mrs Glendoveer. But as she grows older, she also grows restless and starts questioning her life – WHY can’t she go outside if she feels so healthy? WHY can’t she be friends with their friendly new neighbour Daphne Aspinal?

And since we are on a roll with the questions: why are the five birds in the mansion’s aviary such creepy creatures? And did one of them really speak the word “Elliot” to her that one day? Spooky does not even begin to cover it, especially when Clara learns that Elliot was the name of Mrs Glendoveer’s young son, kidnapped when he was 5 months old.

And then Mrs Glendoveer passes away. In her will, she leaves a small stipend to the trio so that they can keep Glendoveer mansion’s doors open in the hope that Elliot will eventually return. And just then, all the other birds in the aviary start communicating with Clara, who discovers a much darker, heartbreaking secret about the Glendoveers’ past.

It bears repeating: The Aviary is a lovely, lovely book.

From its start that shows us how lonely and restless Clara is to the beautifully rendered ending that brought me to tears (of the good kind) The Aviary is an incredibly engaging novel with an old-fashioned feel. It features a well-executed story of decades-old mystery that is slowly revealed to the reader through Clara’s eyes, a horrendously sad back-story and all of it with a side of magic and awesome female characters that drive the story forward.

With regards to the mystery: some things are indeed very easy to guess (although I was pleasantly surprised by at least one twist) but that doesn’t matter because The Aviary is not a book about the mystery after all (even though the mystery is extremely important), rather it is a story about the people whose lives said mystery touches.

As such, it the inhabitants of Glendoveer mansion – both past and present – that truly make this book outstanding. Clara is a great protagonist and I adored her arc which took her from utter compliance to sheer activeness through questioning. She is curious, fierce, loyal and she just grows in front of our very eyes into an awesome young lady. She is not perfect and often struggles with understanding how she can be envious of people she loves or how she can outright lie to her mother when necessary (even as she feels guilty about it), kind of halfway trapped between responsibility and recklessness. And then of course, you have the Glendoveers – but about those I can say not more without spoiling the story.

Above all, I loved the characters here and the relationships formed between them. Like the fraught yet loving relationship between Clara and her mother or the hot-and-cold one between her mother and the cook Lucy. But above all, I absolutely adored the friendship that develops between Clara and Daphne from beginning to end. It was just so lovely to see this loving, funny, caring friendship between these two girls developing and growing into bonds of deep sisterhood (their words, not mine).

The Aviary might be a book for children but I think it has tons of crossover potential for YA and adults alike. I just know I loved it with every fibber of my being and wish this little gem to be found and loved by more readers.

There is a lovely part in the book when Daphne sends the most awesome letter to Clara by means of introduction which opens with a poem. Clara’s reaction is like “OMG this is the most awesome thing ever” (but in the appropriate historical parlance of course):

Part of what made Daphne Aspinal so fascinating to Clara was her curiosity and her complete freedom to satisfy it. Imagine being like that, walking into a new town and shoving poetry through strangers’ mail slots!

Rating: 8- Excellent and leaning toward 9

Reading Next: Envy by Elizabeth Miles

Over at Kirkus: Countdown City by Ben H. Winters