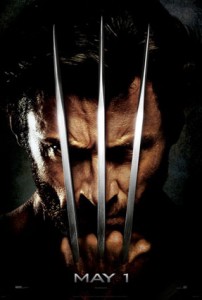 The first official blockbuster of the summer, X-Men Origins: Wolverine made its international debut on Friday to a bevvy of mixed expectations and reactions. Die-hard fans and the geekdom who have been following the production process of the film have not had so much to be excited about, from reshoots, to the internet leaked workprint, to a story that in no way fits the continuity of the X-verse. But on the other side of less-than-enthused fanboys (and fangirls), there was the pervasive sense of excitement, to once again see Wolverine and other mutants on screen doing their thing, in a bonafide special effects-mancandy-badassness bonanza.

So, it was with mixed feelings I went into the theater on Friday night. I told myself that even if the movie sucked on an overall movie scale, I’d still get some sweet action sequences and fights that would make it worth it (as well as the aforementioned mancandy). Would I let overall negative reviews from uptight movie critics or the lackluster fan reaction deter me? NAY! I walked into the theater with armed with popcorn, diet soda, low expectations and a defiantly hopeful mindset.

And, I can say that Wolverine was everything I expected it to be. In a cringeworthy but basically good way.

Beginning on a late 19th century Canadian plantation, we see young, feverish James Howlett’s “birth” as a mutant, when his father John is murdered by groundskeeper Thomas Logan and James retaliates in rage, growing bone claws and stabbing them into Logan’s chest. With his dying breath, Logan reveals he was James’s true father. Fleeing from his home with nowhere to turn, James finds himself joined by the older boy, Victor Creed – also son of Logan, with a very similar mutation. Victor runs with James, telling him that they are brothers now, and they must stick together.

In a truly awesome opening credit montage, we see Jimmy (Wolverine to be) and Victor (Sabretooth) fighting side by side as brothers in every major American War of the 19th and 20th centuries, beginning with the American Civil War (history dork that I am, I wonder how an ostensibly 10 year old Jimmy and 15 year old Victor in 1845 are fighting in the Civil War at 1860 and look as though they are 40-some years old…whatever), and showing Victor’s growing darkness through the ages as he takes a little too much joy in killing, maiming and raping, and James’s growing discomfort with his cruel brother. After facing a firing squad and emerging unscathed, James and Victor are approached by Col. William Stryker who invites the brothers to join him and his elite team of other “special” folks, carrying out covert missions. The team consists of Fred Dukes (Blob to be), John Wraith (aka Kestrel), Chris Bradley (aka Bolt), Agent Zero, and Wade Wilson (Deadpool to be); but when Stryker ruthlessly orders his team to dispatch of some uncooperative villagers in Africa, James turns his back on his brother and the team, deciding he has had enough.

For the next few years, James goes by the name of Logan and lives a happy quiet life in the Canadian rockies as a lumberjack with pretty, spacy girlfriend Kayla (aka Silver Fox) waiting dutifully for him at home, armed with witty native american folklore. Everything is going swimmingly, until Stryker rears his ugly head asking Logan to work with him again, and shortly after Victor kills Kayla. Enraged and hungry for revenge, Logan agrees to Stryker’s Weapon X program only to realize too late that he has been used by Stryker and Victor. Even more pissed off, Logan hunts them down for vengeance. And the rest, as they say, is history. 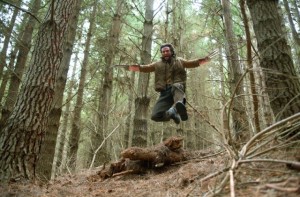 Objectively, I have to say that X-Men Origins: Wolverine basically fails as a movie. The dialogue is clunky and embarrassingly cheesy (“Look at what the cat dragged in,” “Maybe you weren’t the moon, you were the TRICKSTER,” “It was real for me too,” “Embrace the animal within!” etc). The plot moves in stutters and starts, with character directions that never really make sense. What is the point of the movie? The whole purpose for Weapon X is flimsy here, as is Logan’s predictable behavior and linear motivations. The greatest crime of the film is that it isn’t about anything. At its core, it is hollow, void of any greater meaning or significance in terms of Wolverine as a character. Which is a shame because the casting was generally great, and the acting solid. Unfortunately for the film, the screenplay, direction, and execution was disappointingly subpar.

There were a ton of mutants introduced, but each of them had a scarce handful of bad dialogue and screen time a piece. One of my biggest gripes would have to be that all those character tv spots and awesome trailer scenes only comprise only a fraction of the total film – five minutes, tops. Far too much of the movie is focused on Logan as Broody McBroodypants, so much so that I lost a feel for a character that I know and love. Gone was Logan’s snark, his attitude, and badass factor drastically undermined by shitty lines and bad directing. I missed Wolverine’s humor and his edginess, which was instead replaced with a bland, boringly melancholy character.

Also, far too much time was spent on Logan and Victor snarling at each other before engaging in all too brief fights. Which brings me to my second major gripe: for a movie that should have awesome, epic showdowns, all the fight scenes were strangely hollow. Each exchange between Wolverine and Sabretooth would be finished in a few seconds. When Gambit is introduced, he does a grand total of one charged card projectile attack and two power staff moves. That’s IT. Finito (Not to mention, we had already seen all this in the 2 minute trailers). We only ever see the Team X in action once, for a paltry few minutes of screen time. The final scene between SUPER!Deadpool, Wolverine and Sabretooth was by far the best sequence in the film, but that also concluded all too briefly. Because there were so many weak attempts at character introductions, a yawn-inducing love story, a military conspiracy, and a desire to inject more short action sequences (as opposed to a few solid longer ones), everything suffered, and nothing really emerged as notably awesome. 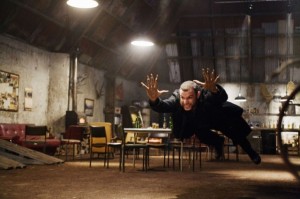 Other, more specific problems included the liberties the movie took with the characters. I’m not a purist by any stretch of the imagination. I don’t particularly care about continuity, so long as it generally makes sense in the frame of the movie…but Wolverine bugged me on a number of levels. Wolverine and Sabretooth as brothers was ok I guess (though I really wish this relationship pre-snarling-acrobatics-fighting was more fleshed out) if only because Liev Shrieber and Hugh Jackman really commit to their roles and make it work. 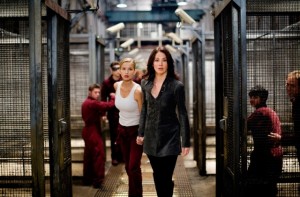 Other character connections were just stupid; i.e. WTF Silver Fox is a mutant with hypnosis powers? Silver Fox is Emma Frost’s older sister? Emma Frost is a glittering, bedazzled nightmare of a mutant without any telepathic powers to speak of? As The Discriminating Fangirl says in her review of the movie, and I’m supposed to care about Silver Fox because…? I’m not even going to get into how pissy I am over “Deadpool” (they really botched up a very popular, entertaining character in this one. I mean, they made him a MOUTHLESS superweapon ninja with teleportation AND healing factor AND adamantium retractable katanas AND Cyclops’s Optic Blasts). How freaking laugh inducing was Stryker’s control over Weapon XI, typing out commands that link up to “Deadpool”, RoboCop style: “ENGAGE!” “DECAPITATE!” “BUY ME SOME ORANGE SHEEER-BERT” ?!?! Adamantium BULLETS were the cause of Wolverine’s lost memories? Add to this the slew of other continuity and character issues and…well, you’ve got a huge mess on your hands.

All my gripes on the table, at the beginning of this review, I said that I found the movie to be what I expected, and there was some good – provided you take off your movie critic/geek hat and replace it with the average moviegoer hat. The casting, for one, was solid. Hugh Jackman is absofuckinglutely RIPPED in this film (he had to have been taking some banned substances to get as big as he is), and as usual he does a fantastic job as Logan. The character flaws can be attributed to shitty writing and horrible directing (how many shots are there of Wolverine’s Vader-like “NOOOOOOOOOOOOOOOO!!!!!!!!” veins-popping-out-all-over-the-place screams? Or ka-shing claws popping out while Wolverine gives the pissed-off, come-hither face?). Liev Shreiber is fantastic as Sabretooth, with his deliciously creepy voice and sadistic devotion to the role. Dominic Mognahan is a fantastic actor who is sadly under-used in this movie, as is Ryan Reynolds in his wonderful initial portrayal of Wade as the Merc with a Mouth (before he becomes Super!Deadpool, that is). Gambit, Kestrel, Blob, and Agent Zero are also well cast.

I hated the direction, the gratuitous camera shots, the dialogue and the weakness of the overall story. But, I loved seeing the characters I love on the big screen again. Wolverine is one of those movies that is bad by all accounts…but still fun to watch, despite its flaws. While I was laughing at the dialogue and over-the-top dramatic cues, rolling my eyes at the weakness of the script, I was thoroughly enjoying myself in a mindless, empty calorie kind of way. (I have a soft spot for deeply flawed movies like this, a la the most recent X-Files movie.)

Bottom line: Wolverine was never going to be an Oscar contender, or on the level of awesome comic book films the caliber of The Dark Knight or Watchmen or Hellboy or even Iron Man. But for what it is, Wolverine does an OK job. It’s a decent summer flick, average in almost all respects. It’s a shame, since with so much acting talent, this could have been an exceptional movie and a fine addition to the Marvel canon. A missed opportunity…but one can only hope the crews and studios get their act together for the next adaptation on the horizon.

Additional Thoughts: The post-credits of the film boast two alternative short endings, which differ depending on where you watch the movie. I got the Deadpool ending, as he pulls his decapitated head from the the rubble on Three Mile Island. Somehow he has grown a mouth and goes “Shhhh.” (Audience laughs collectively at this)

The other ending has Wolverine in Japan, drinking because he cannot remember anything.

Rating: 6 Basically an Average, OK movie – Not good by any stretch of the imagination, but is still mindlessly entertaining enough to watch as a summer flick. I can understand how fans might feel betrayed or disgusted with this film, but my advice is not to take the movie, or yourself, too seriously when you watch it. Accept it as thoroughly mediocre, and you might just enjoy yourself.

Over at Kirkus: Servant of the Underworld by Aliette de Bodard