Book Review: The King of the Crags by Stephen Deas 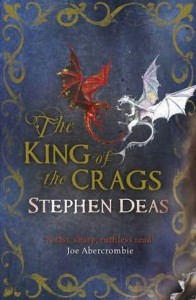 Title: The King of the Crags

Stand alone or series:Sequel to The Adamantine Palace, second book in a trilogy.

Prince Jehal has murdered, poisoned and betrayed his way to the top. There is a new speaker for the realms, his opposition has been crushed, now he just has to enjoy the fruits of power. And yet . . . He feels more for the wife he married for power than perhaps he should and his lover knows it. And out in the realms those loyal to the old regime are still plotting. and there are rumours that the Red Riders, heralds of revolution and doom are on the ride. And still no-one has found the famous white dragon. The dragon that, if it lived, will have long since recovered from the effects of the alchemical liquid fed to the dragons of the realms to keep them docile, to block their memories of a time when they ruled and the world burned . . . Stephen Deas has created an epic world, vivid characters, a plot full of betrayals and the most awesome dragons fantasy has seen.

Why did I read the book : I read the first one and it ended with a cliff-hanger. I can’t have that can I?

How did I get the book: Review copy from the publisher

The King of the Crags is the sequel to The Adamantine Palace and picks up shortly after events at the end of the previous book. Queen Zafir is the new Speaker of the Realms after the deposition of Queen Shezira, arrested for a murder she did not commit. There is much unrest in the realms as it is rumoured that two of her daughters might be rallying to free their wronged mother. Whilst Speaker Zafir plots Shezira’s execution, summoning other Queens and Kings to vote for her death -a death that is sure to bring War to their world – Prince Jehal plots and schemes for the opposite. Meanwhile, the Red Riders, a group of dragon riders led by a religious fanatic are getting ready to start a fight of their own. With the realms at the brink of a catastrophic war, with so many different t factions where no one knows who is enemy or ally, the winner will be the one with most Dragons. What the Dragon-Kings and Queens do NOT know is that soon they might be at war against the Dragons themselves, led by the awakened white Dragon, Snow.

When I read The Adamantine Palace I observed that the book’s greatest strength was also its greatest weakness: very short chapters with alternating point of views which kept the action going fast and furious but prevented the characters from being fully developed. I am positively delighted to report that The King of the Crags addresses these issues and does that very well. Not only does The King of the Crags have longer chapters, batches of them also concentrate on a particular location or a character instead of those crazy, dizzying all- over- the- place mini-chapters of yore.

I believe this is a storytelling choice that serves the book, the story and the characters even if the action is somewhat diminished. It allows the writer to better explore his world, to further develop ideas and to present characters that are no longer cardboard representations of villainy. Although I can’t really say I can relate, sympathise or root for these characters because let’s face that would be the same as to root for say, the Joker to beat Batman. That said, even though I can’t root for the Joker for example, I am forever fascinated by this character and this is what effectively happened when reading The King of the Crags . Some of the characters this time around really came to life before my eyes. Prince Jehal, chief amongst them. He is a horrendous excuse for a human being. A self-serving, conniving cheat and a murderer whose motivations are as shifty as they come – a confluence of boredom and power hunger – but whose inner workings proved to be absolutely fascinating to me. I found myself, almost against my own wishes, thoroughly enjoying the bits with Jehal and how utterly wrong and yet (gods save me) delicious he is. The thing that became really, really clear to me whilst reading this book is how much of a child of his environment Jehal is. An environment that is fuelled by courtly intrigue, where everybody is out to get everybody and where you can never, ever tell who is your friend or not. When even your lover can be plotting your death, when anyone can be secretly hoping for your demise, it is easy to understand why these characters are the way they are. In this world it is impossible to know who is going to survive the next chapter and that is something the author never shies away from.

This is a truth applicable to all of them: like Nightwatchman Vale Tassan who cannot, as an Adamantine Guard have doubts but whose mind is actually plagued by them. Lord Meteroa, Jehal’s uncle, is also a great character and I enjoyed his thought processes very much. The theme of this novel and perhaps even of this world, is how much environment and circumstances trump personal development and ideas. Who are these people? What are they really doing and why? Will they ever break away from the harsh reality of their lives, CAN they? Do we, as Fantasy readers, even want that to happen – since this book seems to fall under the current “gritty fantasy” kick? I think that the very fact that these questions can be asked point to something really positive about the book.

There is less development than expected with the story-arc about the awakened and Snow in particular and this is another clue that to me, the powerful Dragons are not at the centre of this story – more what the humans who control and exploit them have done and become in order to do so.

I think this book is a vast improvement over its predecessor. But it is not a perfect read by any means. If some characters became three dimensional characters, some of them are still very much two dimensional. Jehal’s wife for example is the Mary Sue stock character but more than that, she is an anomaly that is both unbelievable and annoying. The woman is daughter of a conniving Queen and married to a man known as The Viper. She cannot possibly be this naïve and good. It just doesn’t compute with the world she lives in. Mr Stephen Deas, I beg of you, please let her grow a backbone.

What about Speaker Zafir? I find her both fascinating and confusing. Is she power hungry just like everybody else in this world or is she merely the epitome of the scorned lover? I want her so much to be the former because the latter really annoys me as a stereotypical view of a female character. I also wonder why two of the most important characters in the series do not get a point of view even though minor, pointless characters do. The only female character that gets a point of view is Princess Jaslyn and for all that she is definitely fundamental to what is yet to come, she gets very little spotlight.

A couple of other things that I am puzzled about concern the Alchemists, Blood Magic and the Taiytakei as they are still largely as mystery to me. What exactly in their role in all this? Will we learn in the final volume? These are lesser developed aspects of the world building that have been going since book 1 And still no answers. The plotline regarding the Red Riders seemed to have been largely underused .

And one last question: why in the world is this book called The King of the Crags? I may have missed something but the king is such a minor (yet powerful) character in this book. Why name it after him?

Questions aside, I finished reading The Adamantine Palace only just about interested about reading this sequel. I closed The King of the Crags knowing for a fact that I will be picking up the final instalment in the trilogy come rain or come shine.

Notable Quotes/Parts: A Queen. A Prince. A Crossbow.

I will say no more.

Verdict: The King of the Crags is a solid and superior sequel to The Adamantine Palace now that the author allowed his characters to shine.

Reading Next: Wicked Becomes You by Meredith Duran