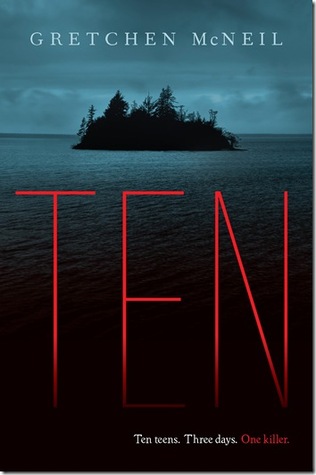 SHHHH!
Don’t spread the word!
Three-day weekend. Party at White Rock House on Henry Island.
You do NOT want to miss it.

It was supposed to be the weekend of their lives—an exclusive house party on Henry Island. Best friends Meg and Minnie each have their reasons for being there (which involve T.J., the school’s most eligible bachelor) and look forward to three glorious days of boys, booze and fun-filled luxury.

But what they expect is definitely not what they get, and what starts out as fun turns dark and twisted after the discovery of a DVD with a sinister message: Vengeance is mine.

Suddenly people are dying, and with a storm raging, the teens are cut off from the outside world. No electricity, no phones, no internet, and a ferry that isn’t scheduled to return for two days. As the deaths become more violent and the teens turn on each other, can Meg find the killer before more people die? Or is the killer closer to her than she could ever imagine?

Why did I read this book: When Ana and I first heard about this book, we were excited (if a little wary) – we both had read and loved And Then There Were None as young adults, and were keen to try this modern interpretation (which would hopefully deal away with the racist title/rhyme/implications of the original).

Ten teens head out to a secluded Henry Island vacation home, just off the coast of Washington, for a weekend-long party. For senior Meg, the trip is a good excuse to get away and work on her writing and spend some quality time with her best friend Minnie before Meg leaves for her first quarter of college at UCLA. She doesn’t expect to find her off-limits crush TJ at the party, complicating an already tense situation with Minnie (who has carried a torch for TJ since forever). She certainly doesn’t expect to be spending the weekend with a group of unknown other people from a neighboring high school. But, there’s plenty of booze and plenty of space, so Meg doesn’t think too much of the fact that only ten people showed up to the party, or that their host is MIA.

When a storm hits the island and the power goes out, things start to get serious – and one by one, the guests at the party start to die from different “accidents.” Each of the ten teens are connected by something or someone in their past – someone that is out to exact terrible, cruel vengeance.

Basically, Ten is the written equivalent of a teen slasher film – it’s a mystery novel, but it feels much more in line with the likes of I Know What You Did Last Summer (book and film) and Christopher Pike’s Weekend. In short, it’s the kind of book I would have loved reading when I was 13, and I have to give Ten props because there really aren’t too many thriller/mystery/murder/horror novels like this anymore – at least not in the YA space. As a loyal Christopher Pike (and yes, R.L. Stine to a lesser degree) devotee, I used to run through these like candy – and these days they don’t really seem to be as big of a thing. As it stands completely on its own, Ten is a solid, entertaining teenage who-done-it, a throwback to 80s/90s YA mystery/horror, and all around a fun book.

From a character perspective, Ten sticks to the classic stand-by tropes for this particular type of YA horror/mystery – the heroine is the quiet, studious (virginal) brunette who is a loyal and shy, her best friend is predictably blonde, likes to party and is fast and loose with the dudes. While these tropes are familiar and irksome, there are welcome and pleasantly surprising deviations – the main love interest character is an intelligent jock (who is black), for example. That said, there’s not much in the way of character development overall. Things happen to these teens, and they react predictably, well within their standard/stock definitions as characters (the bitchy control-freak superstudent is bitchy and controlling; the manic depressive character flies off the handle at the only person who is trying to help her adjust; the two lead characters find time to squeeze in a kiss and a cuddle). Then again, this is not really a character driven book. Really, this is the kind of book that lives and dies by its skill at telling a compulsively readable mystery/thriller – and in that respect, Ten is very successful.

So let’s talk plot. The mystery, overall, is very much loyal to the Agatha Christie source material – the progression of the murders and the twist regarding the killer’s identity are both in line with the original book, which I consider a good thing. The deaths pile up quickly and our cast of characters goes through the cycle of surprise-shock-paranoia-fear-anger-relief as they figure out what or who is behind the murders. The tensions ratchets up nicely with the body count, and all in all the ultimate reveal of the murderer is a nice surprise – unless you’ve read And Then There Were None, that is. (I take that as a positive, but your mileage may vary.) There are cool little allusions throughout for the Christie fan too – instead of cyanide, almonds are the instrument of poison (almonds of course are the source of cyanide), for example. And, on a bright note, Ten seems to have made an effort to be racially sensitive and inclusive, which is kind of a big deal, considering the original title and racist aspects of the Christie novel. Four of the main characters are people of color (asian, black, Samoan), and when certain characters make racist/stereotype comments, they are called out on them. That is cool. On the negative side, the book plays fast and loose with the term “crazy” and portrays two characters with real mental illnesses as “irrational” or “hysterical” – which is frustrating, to say the least.

Other things that bothered: I feel like the book should have been set in the 1990s or something, because there are some things that feel a teensy bit anachronistic. For example, early in the book, Meg pulls a facebook invite out of her bag – a printout of the invite, presumably? I don’t think anyone does this, certainly not teenagers who can access said invites from computers or phones. On that note, did ONLY Meg, Minnie, TJ and Gunner get the same invite (or are these teens completely mystified by FB invites)? The whole point of the weekend party is to get 10 specific teens together, though they are expecting a much larger party, which doesn’t sit right. Plus, in this time and age, everyone has a computer and a cell phone and can pretty easily access others (or the authorities, if need be). I’m not quite sure the intense isolation that happens on this island is entirely believable, or that the teens are so inept at finding a way to get help.

All in all, I enjoyed Ten. It’s not the most memorable book, and there are certain things that bothered me, but it is undeniably entertaining and a competent YA mystery/thriller/horror novel. Good, fluffy, finish-it-in-about-an-hour reading.

Notable Quotes/Parts: You can read the first 60 pages of the book online HERE.

WHY HAVEN’T I READ THESE BOOKS?!: The Uglies Trilogy by Scott Westerfeld