The Magnificent 12 Blog Tour: The Call & The Trap by Michael Grant

Today we are thrilled to be part of the blog tour for the release of book 2 in Michael Grant’s new middle grade series, The Magnificent Twelve! In order to celebrate the release, we have a guest post from Xiao (a character in The Trap), two mini-reviews, and a chance to win the books. 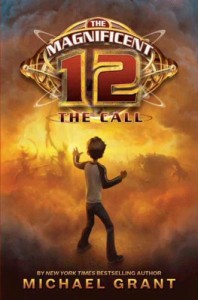 Twelve-year-old Mack MacAvoy suffers from a serious case of mediumness. Medium looks. Medium grades. Medium parents who barely notice him. With a list of phobias that could make anyone crazy, Mack never would have guessed that he is destined for a more-than-medium life.

And then, one day, something incredibly strange happens to Mack. A three-thousand-year-old man named Grimluk appears in the boys’ bathroom to deliver some startling news: Mack is one of the Magnificent Twelve, called the Magnifica in ancient times, whatever that means. An evil force is on its way, and it’s up to Mack to track down eleven other twelve-year-olds in order to stop it. He must travel across the world to battle the wicked Pale Queen’s dangerous daughter, Ereskigal—also known as Risky. But Risky sounds a little scary, and Mack doesn’t want to be a hero. Will he answer the call?

At twelve years old, Mack is a pretty ordinary kid leading a pretty ordinary life. He does an average job at school, he has a few friends, a pair of decent (if constantly distracted) parents, and manages to avoid sticking out in almost every way. Except there is something decidedly un-ordinary about Mack, even though he doesn’t quite know it. You see, Mack has a list of phobias – from sharks (galeophobia) to a fear of phobias (phobophobia). But while Mack has an irrational, consuming fear of dentists and the ocean, he doesn’t fear things that most rational people should…like bullies. So, when Mack gets into a tussle at school with not only the geek bullies, but ALL of the Richard Gere Middle School bullies (there are different bullies for each type of clique, of course). Things look pretty grim when the Biggest (really) Baddest Bully, a fifteen year old named Stefan, gets his (somewhat slow but very deadly) sights set on Mack – but when Stefan is gravely injured and Mack saves his life (twice!), Stefan takes Mack under his wing. As it turns out, Mack is one of the Magnificent 12, who posses the “enlightened puissance” and, thanks to the warnings and help from an ancient (if weird) dude named Grimluk, Mack has a mission to find the remaining magnificent 11 and save the world from the clutches of the evil Pale Queen – with the help of Stefan, of course.

The Magnificent 12: The Call kicks off a new middle grade series by Michael Grant, introducing young readers to a sympathetic and accessible protagonist and a world that is both familiar and wondrously strange, with an evil queen, insect-like monsters, an inadvertently hilarious golem, and, of course, magic and danger. While the ordinary-kid-becomes-the-world’s-only-hope trope is infinitely familiar and omnipresent in the YA and MG categories, The Call distinguishes itself from the fray because of its sense of humor. The jokes range from charmingly silly (ex: “Grimluk was twelve years old. Like most twelve year-olds he had a job, a child, two wives and a cow. No. No, wait, that’s not true. He had one wife and two cows.”) to slapstickish fun, and, while they may not be to the taste of older readers, certainly should appeal to tweens and middle grade level readers.

The novel itself alternates two main storylines – one in the present, with Mack as he embarks on his adventure to find his fellow allies of the Magnifica, and one in the past, with a twelve year old Grimluk and his stand against the Pale Queen many, many hundreds of years earlier. While Grimulk’s story is fraught with peril and hilarity (being a twelve year old with a job, wife, new baby, and already a lack of teeth due to his advanced age), I felt like the frequent jumping back in time to Grimulk’s past was a bit frustrating, as I cared infinitely more for young Mack and Stefan. My only other main criticism with this novel, and the series at large is that though the action abounds and this is a quick, entertaining read, The Call lacks the heart and deeper meaning that characterize the best novels – including those for young readers (Catherynne M. Valente’s incomparable The Girl Who Circumnavigated Fairyland In A Ship of Her Own Making immediately springs to mind, as does the more lighthearted but very smart Aliens on Vacation by Clete Smith). That said, The Call is a fast-paced, fun read and will most certainly appeal to its target audience. 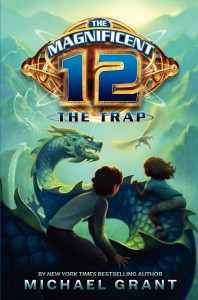 In the thrilling second book of the Magnificent 12 series, Mack MacAvoy is challenged by his spectral mentor, Grimluk — who only appears in the shiny chrome pipes of bathrooms.

Mack must find the ancient ones, the great forgotten forces. Some will help; some not so much. But above all—

Time is short! The wicked Pale Queen’s three-thousand-year banishment ends in thirty-five days, and she will be free to destroy the world. It’s up to Mack to stop her return. But what do all of Grimluk’s clues mean? Can Mack achieve everything he must do without getting killed by the evil Risky — and escape the trap?

The Magnificent 12: The Trap is another fast-paced episode in bestselling author Michael Grant’s hilarious fantasy-adventure series.

After teaming up with Jarrah, the second of the Magnifica in The Call, Mack, Jarrah and Stefan set out to find the remaining 10 members possessing the “enlightened puissance.” With only a few muddled, cryptic clues from Grimluk (via the bathroom), Mack conquers his phobia of flying (sort of) and heads to China with his friends in tow, only knowing that he must find something about a band called Egg Rocks (actually items called “egge” rocks), toityberg (actually Teutoberg Forest) nine dragons (of Daidu). On this leg of their journey, Mack and his friends find the next member of their world-saving team in Xiao, a lovely young dragon in the form of a girl. Of course, their mission is dangerous and full of mortal peril, as they are chased by more monstrous creatures, and a very old assassin named Paddy “Nine-Iron” Trout. Oh, and there’s also Princess Risky – aka the goddess of destruction and daughter of the Pale Queen – hot on their tail. The intrepid team discover that not only do they only have 36 days to find the remaining members, but they also have to kill Risky twelve times in order to prevent the Pale Queen’s ascension. No problem.

As second novels go, The Trap is every bit as silly, fun, and adventure-filled as its predecessor. I loved the change of location from the US, to Australia, to China, and it’s wonderful to see diversity with the heroes of the world in the Magnifica. While Mack and Stefan are both caucasian boys from America, Jarrah is aborigine-descended, and Xiao is an honest to goodness Chinese Dragon (in the form of a girl). I loved the addition of Xiao to the crew as her character is bold and direct – plus, she can fly.

Like the first book, The Trap is split across two stories, one in realtime and one in the past – only this time, the past storyline is that of Paddy “Nine-Iron” Trout and his lurid history. While Nine Iron’s storyline is interesting, I had the same issue with this as I did with The Call: I didn’t really care much for the past storyline and found myself rushing through to get back to the overall story. The only other thing about The Trap and The Call that is a little worrisome is that there are a number of current references in terms of technology (iPhones) and pop stars (Ke$ha), which could date the series rather quickly. But for now, this and plotting questions aside, I found myself thoroughly enjoying this book, and with a cliffhanger ending, it will keep readers hungry and anxious for the next member of the twelve.