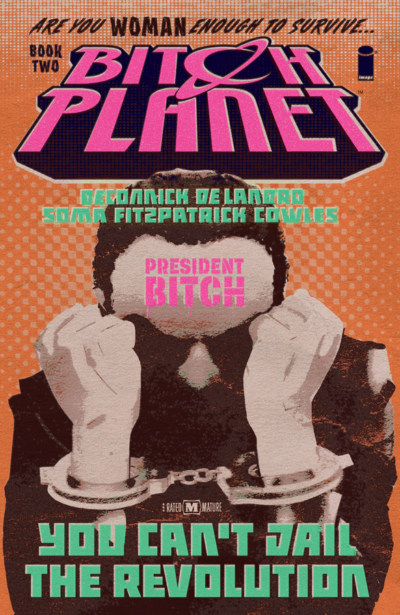 Eisner Award-nominated writer KELLY SUE DeCONNICK (PRETTY DEADLY, Captain Marvel) and VALENTINE DE LANDRO (X-Factor) follow up on the success of EXTRAORDINARY MACHINE with the second installment of their highly acclaimed and fiercely unapologetic BITCH PLANET. A few years down the road in the wrong direction, a woman’s failure to comply with her patriarchal overlords results in exile to the meanest penal planet in the galaxy. But what happened on Earth that this new world order came to pass in the first place? Return to the grim corridors of Auxiliary Compliance Outpost #2, to uncover the first clues to the history of the world as we know it…and meet PRESIDENT BITCH.

Stand alone or series: Volume 2 in the Bitch Planet series

Bitch Planet is a brilliant dystopian comic series written by Kelly Sue DeConnick with art by Valentine De Landro. Set in a terrifying futuristic world (but with visuals/art that remind me of 70s pulp fiction) where white men (and to an extent, white women) hold the power and control the riches—and all the non-compliant women are deemed criminals and sent off to another planet, the Auxiliary Compliance Outpost, otherwise known as Bitch Planet. What constitutes “compliance” and “criminality” is of course, arbitrary and unfair, rigged against women and most specifically, women of colour and LGBT. The story follows a number of inmates who have been tasked to create a team to participate in the first ever transmission of a brutal sport for the benefit of male viewers. But this world being what it is, there is a conspiracy at play here. Who could be behind it? And who could benefit from it.

The first volume of Bitch Planet came out all the way back in the 2015 (gosh, this feels like such a long time ago now) and I have been waiting in tenterhooks for the second trade to drop. The story picks up where it left off—with a murder and a secret budding conspiracy—and it proceeds from there. Collecting issues #6-#10 (out of a promised 30 to complete the whole arc), this second volume feels similar to the first one in terms of portentous storytelling and themes but very different in presentation. Whereas the first volume had more backstories concerning the prisoners with several issues dedicated to the prisoners’ past and personality, covering the reasons why they were sent to Bitch Planet; as well as a storyline that felt much more localised because it was so focused on this group of people, this second volume features only one backstory (a very important one) and it widens the arc to include a broader view of the world, different characters, a bigger look at the facilities within Bitch Planet (including a building that seems to hold exclusively trans women) and to introduce one major new character: President Bitch.

This new volume also feels like it became less of an ensemble female cast and more of a panoramic view with a strong focus on one particular character. It is not a bad thing: in fact, I’d say that it’s starting to feel like I know where the story is going as the author’s vision for it becomes more and more clear. One can see the seeds of revolution.

I first described Bitch Planet as “Orange is the New Black in space and without Piper”, with a story that focuses primarily on the marginalised characters and it remains an apt description. The most important thing though is Bitch Planet is an overtly intersectional, brutally honest, no holds-barred, angry feminist comics. There are also tons of extra materials—lots of meta commentary on our present time—that are as important and exciting as the comics itself. I highly recommend it.