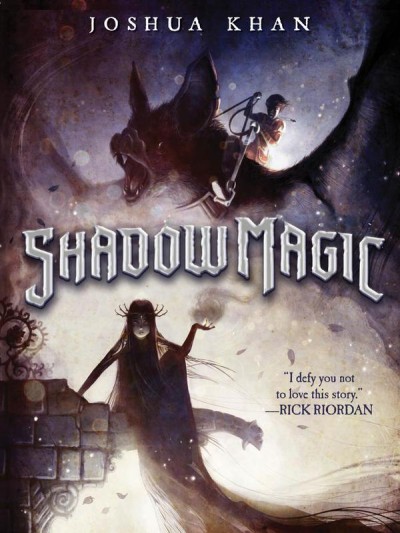 Thorn, an outlaw’s son, wasn’t supposed to be a slave. He never should have run away from home, leaving his mother and siblings to fend for themselves. Now he’s been sold to Tyburn, an executioner, and they’re headed to Castle Gloom in Gehenna, the land of undead, where Thorn will probably be fed to a vampire.

Lilith Shadow wasn’t supposed to be ruler of Gehenna. But on the terrible day her father, mother, and brother were killed, young Lily became the last surviving member of House Shadow, a long line of dark sorcerers. Her country is surrounded by enemies and the only way she can save it is by embracing her heritage and practicing the magic of the undead. But how can she when, as a girl, magic is forbidden to her?

Just when it looks like Lily will have to leave her home forever, Thorn arrives at Castle Gloom. A sudden death brings them together, inspires them to break the rules, and leads them to soar to new heights in this fantasy with all the sparkle and luster of a starry night sky.

There in the land of the undead, high atop a valley of death houses, lies Castle Gloom, the stronghold of House Shadow. Inhabited by those who dwell and embrace the dark, the Shadows are as feared and maligned as they are fierce and loyal to each other.

Lily Shadow is the new ruler of Gehenna and the new Lady of House Shadow after her entire family was murdered. As a descendant of the Six Princes, in a line of dark sorcerers and necromancers Lily might have the right shadowy heritage but the wrong gender – magic is forbidden to women – to fully practice the magic of her ancestors. What is she to do when she clearly show signs of a power that hasn’t been seen in hundreds of years? What is she to do when she is told she needs to marry the heir to a kingdom so different – and so distant – from hers because as a girl there is nothing else she can do to keep her House alive?

Thorn is an outlaw’s son, on the search for his beloved father when he is captured and sold as a slave to Tyburn, House Shadow’s executioner. Uneducated, poor and without prospects, what is he to do when he is confronted by a situation he has no control of, by truths he doesn’t care to hear and by a young heir in trouble?

Shadow Magic is an exciting novel that takes turns being a fun romp, a family saga, a murder mystery, an epic Fantasy of diverse kingdoms and types of magic but which is ultimately a story of friendship, of learning and coming of age. The friendship that develops between Thorn, Lily and Prince-Hostage K’Leef is a central facet that beautifully underscores each character’s individual journey. Thorn and his father or Lily and her uncle. Thorn and his “lack” of heritage and power matching Lily’s and her own excess of heritage (which can be both freedom and burden). They are both tested in different ways and I just loved how Lily’s arc is all about diplomacy, power and learning. It’s also interesting to see how the idea of image, true selves is played out throughout as the characters need to hide who they are for a myriad of reasons.

The story and characters truly come into their own in the second part, closer to the ending. That’s when all the different storylines converge, the motivations are cleared, the twists happen and the characters grow and settle in their roles. The main characters, as young as they are (13) do learn difficult lessons: about who to trust and why; about what history tells you and why; about the meaning and importance of learning as well as the meaning and importance of instinct.

Light is dark, dark is light, bats are pets, zombies are friendly members of family and the heroes are not who you expect them to be in this fun, slightly subversive Fantasy that straddles the line between Middle Grade and Young Adult.