This week, Ana tackles a REALLY old school kids Fantasy, Over sea, Under Stone the first in The Dark Is Rising sequence by Susan Cooper

Title: Over Sea, Under Stone 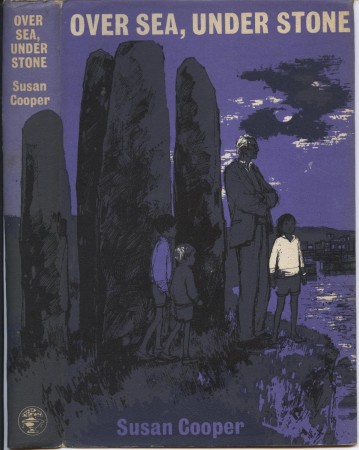 On holiday in Cornwall, the three Drew children discover an ancient map in the attic of the house that they are staying in. They know immediately that it is special. It is even more than that — the key to finding a grail, a source of power to fight the forces of evil known as the Dark. And in searching for it themselves, the Drews put their very lives in peril. This is the first volume of Susan Cooper’s brilliant and absorbing fantasy sequence known as The Dark Is Rising.

Standalone or series: First in The Dark Is Rising sequence

Over Sea, Under Stone is the first in what became known as The Dark Is Rising sequence and it’s a mystery/adventure/ quest following three siblings on holiday in a small town in Cornwall where they discover an ancient map in the attic and embark on a dangerous quest.

With the help of their mysterious Great-Uncle Merry, Simon, Barney and Jane run against time and dangerous enemies to decipher the map they found as well as a manuscript that was found with it.

And it’s like: all the nostalgic elements of Great Old Adventures are here. With the holidays setting, the omnipresent narration moving from head to head, the slow pacing, the adventurous shenanigans, the dynamics between the siblings and the portentous danger that people will hint to but not really clarify apart from saying “oh the GRAIL and KING ARTHUR and also THE DARK.” And why did the kids, these kids in particular were So Important and Instrumental in finding the Grail which was really, when you think of it, so easy to find, we never come to know.

But here is the funny thing: I enjoyed this book very much in the way that – having read it now as opposed to when it came out in the 60s – it became an amalgamation of some of my favourites: a bit of The Goonies here, a dash of Swallows and Amazons there, plus The Lord of the Rings and then a bit of the Tricksters, Narnia, any King Arthur story ever and so on and so forth.

And the kids are fun even though I was, at first, a bit torn about Jane’s portrayal as a stereotypically traditional girl who doesn’t like to get dirty, who is a bit of a mother figure and the “sensible one.” However, I checked myself as I don’t see why any of these things are intrinsically negative especially because she is the one who actually deciphers how to read the map.

Even though this is the beginning of the The Dark is Rising sequence, this first book reads much more as a self-contained, stand-alone quest than the start of an ominous series of adventures.

I wonder what happens next. I am so glad I already have The Dark Is Rising.

Once upon a time… a long time ago… things that happened once perhaps but have been talked about for so long that nobody really knows. And underneath all the bits that people have added the magic swords and lamps they’re all about one thing – the good hero fighting the giant or the witch or the wicked uncle. Good against bad. Good against evil.