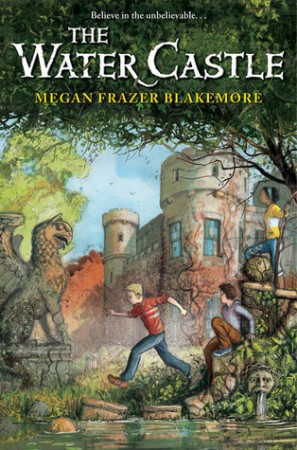 Ephraim Appledore-Smith is an ordinary boy, and up until his father’s stroke, he lived an ordinary life. But all that changes when his family moves to the Water Castle — their ancestral home in the small town of Crystal Springs, Maine.
Mallory Green’s family has always been the caretakers of the Water Castle — and the guardians of its mysteries. She’s been raised to protect the legend of the Fountain. But ever since her mom left, she’s stopped believing in magic.

Will Wylie’s family has been at war with the Appledores for generations, all because of the Water Castle’s powerful secrets. But Will has rejected legend and magic, putting all of his faith in science.

When Ephraim learns of the Fountain, he’s sure finding it can cure his dad. With Mallory and Will’s help, the trio embarks on a mission that brings them deep into their families’ shared history, through every secret room in the Water Castle, and on a quest that will blur the lines of magic and science, creativity and discovery, leaving readers to wonder: Do you believe in the unbelievable?

Why did I read this book: It got a starred review from Kirkus, several of my go-to MHG reviewers loved it. I saw it at The Strand and it was very cheap so I got it.

The more I read and review children’s books the more I find it all to be a Complicated Affair. Do I approach them like the adult that I am or do I approach them bearing in mind their intended audience? And even if I come to believe that its intended audience would like the book do I still recommend it even though I found flaws in the book’s logic? To sum up: do I read for myself and write my review accordingly or do I bear in mind the book’s potential readers? This is a question that applies to all reviews but which is foremost in my mind when reading Middle Grade. Especially when it comes to books like The Water Castle.

In other words: I am conflicted about this book.

On the one hand, there are things that are excellent. The Water Castle tells the story of three young kids – Ephraim, Will and Mallory. The narrative’s viewpoint alternates between those three and it also includes extracts from one of Mallory’s ancestors, a young African-American woman named Nora who is writing a journal in the early 1900s.

Ephraim’s father has recently had a severe stroke and his mother decided to move from Boston to their family estate – known locally as The Water Castle – in a small town in Maine to help with his recovery. The Water Castle is now nothing but a huge mysterious house full of undiscovered rooms but its grandiose past still lives on in the minds of everybody in town as once the Grand Hotel where people came to drink its famous healing waters. Some say that the water actually might spring from the mythical Fountain of Youth, found by one of Ephraim’s ancestors and a possible explanation for the fact that everybody in town is so healthy and smart.

What the book does really, really well is to expound on this basic scenario by having the three children become friends and allies. They start by working together at school on a project about early North Pole explorers (a fun theme that runs through the book and connects both present and past) and then trying to solve the mystery of the Fountain of Youth. What happens next is a fun adventure following the three kids going around town as well as up and down secret rooms in the house. As the tension builds up, questions of immortality, of tradition and of inherited feuds are addressed – to uneven results.

It’s a really interesting set-up because each kid has a different motivation for going on this quest. Ephraim hopes to find the Fountain so that he can cure his father; but this quest also gives him a sense of purpose as he often sees himself as the mediocre member of the family since his older brother and younger sister often excel at everything. The relationship with his siblings is one of the best things about the book as well, especially the way that each kid deals with their father’s ailment. Mallory’s motivation stems from a childhood brought up on hearing fantastical stories about the Water Castle and about the Fountain. Her parents have always told her those stories as though they were true and their love for each other shone through the telling. But now her mother is gone, her parents are separated and what else about her life is a filthy lie? Finding the Fountain would definitely re-establish the order of things. As for Will, he needs to find the Fountain in order to explain it: as a budding scientist, all of this will only make sense if he can understand the properties of the water. It doesn’t matter that his father will probably kill him if he finds out that he is friends with Ephraim because it is time for idiocy and ignorance to end.

In the meantime, there are Nora’s journal entries: a young woman in the early 1900s, she is a learned scholar who wants to become an explorer and who is hired by one of Ephraim’s ancestors to assist him on his scientific research about the legendary water’s properties.

As you can see, The Water Castle offers a very rich story, with several interesting threads that blend together rather well. I loved the kids (including Nora) and their storylines but there were certain things that give me cause to pause.

The approach here is kind of awesome. It’s about taking what could be otherwise “magical” with an attempt to explain the Fountain of Youth through the scientific method by examining its properties and how it can even exist. In a way, this is much more Science Fiction than Fantasy and I would have otherwise really appreciated this hadn’t it been for the fact that the “Science” was of the hand-wavy variety. This wouldn’t generally be a huge problem – I can suspend disbelief – if it wasn’t for how the book seems to be so determined to have things set in a “realistic” scenario. It does that by introducing science lessons, science experiments and in Nora’s timeline, by having her interact with famous scientists like Nikola Tesla.

So what is wrong about the science here? First of all, they find out that the water contains a new natural chemical element which, in our world, as it exists, it is not POSSIBLE – all elements occurring naturally have been found according to the periodic table of elements (although it is possible to synthesise a new element which is not the case here). Then there is how they take the water (with this element in it), put the water in a barrel then use electricity to affect the water and create the Super Water which: no. This is a completely bogus experiment – the water within the barrel would not be affected in the way intended by the author in this scenario.

Yeah, I can’t believe I am going on and on about this and let me tell you, having a partner who teaches Chemistry and Physics is both a blessing and a curse. This is also where I take a break to ask: does this matter? If the book is good otherwise and I think that really fun for children, does it matter? I personally think it does: Science is important.

But moving forward, there are also flaws in the internal logic. One of the biggest ones has to do with the connection between Nora and Mallory’s mother and without spoiling: their true connection is clearly defined in the book (at least they were for me) and although it is SUPER COOL, it is not very believable that no one else would realise this given what this connection entails. It also makes one wonder about certain things: how come these kids are the only ones finding out about the true nature of the water? How come no one has ever found this barrel in the roof, or the hidden bottles of Fountain of Youth water (which are not well hidden at all considering how the kids find them). It is also puzzling that the author addresses racism in the present storyline by having Mallory being outspoken about it but it doesn’t at all addresses it in the 1900s storyline – Nora is a African-American girl who works at a hotel-estate belonging to a white rich family with white privileged guests and not once there is any indication that she is affected by any form of racism. As much as I completely loved her storyline, I also felt there was a weird disconnect there.

And I also think the super neat ending completely defeats the bigger questions asked about immortality in a way. It was a let-down for me because I am really not interested in magical cures and despite the “scientific approach” this is ultimately what it really was to me.

That said, this is my interpretation of the book – things are not really spelled out at all (although they seemed obvious to me) and I guess that part of the fun here is to argue over What Really Happens. The Water Castle is not really as bad as what the misgivings above might indicate and has enough awesome in it to make it worth reading if you are so inclined.

Reading Next: Absent by Katie Williams

Over at Kirkus: Broken Monsters by Lauren Beukes