Did Not Finish: The Turning by Francine Prose 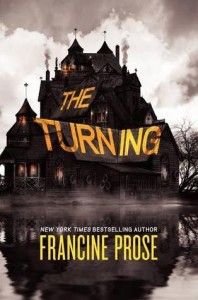 Jack is babysitting for the summer on an isolated island with no Wi-Fi, no cell service, and no one else around but a housekeeper and two very peculiar children. He immediately senses something sinister-and it’s not just the creepy black house he’s living in. Soon he is feeling terribly isolated and alone, but then he discovers there are others. The problem is, he’s the only who can see them. As secrets are revealed and darker truths surface, Jack desperately struggles to maintain a grip on reality. He knows what he sees, and he isn’t crazy…Or is he?

Where does reality end and insanity begin? The Turn of the Screw reinvented for modern-day teens, by National Book Award finalist Francine Prose.

How did I get this book: I got a review copy at BEA

Why did I read this book: This is a contemporary retelling in epistolary format of The Turn of the Screw and it seemed like a good pick for this Halloween Week.

The Turning is a poorly-executed attempt at retelling Henry James’ The Turn of the Screw.

Jack is a high school senior who needs to save money for college and as such, has accepted a summer position as a babysitter. He is to take care of two orphaned children, Miles and Flora, at the only house on an isolated island where the two children live with a housekeeper. Jack has been hired by the children’s uncle who does not want to not be bothered by any news about them. The uncle also doesn’t allow internet, TV or phone, in order to protect the children from the “corrupting influences of modern society and culture.” So Jack’s only means of communications with the outside world are his letters to his girlfriend Sophie and his father. Those letters are the narrative mode of this epistolary novel.

The problem I had with the novel is twofold: the complications that stem from the contemporary setting; and the narrative itself.

The problem with the former is how much suspension of disbelief is needed in order to buy into the premise. I understand that for this story to work there is got to be a sense of isolation in regards to the house and the children. This is already really hard to pull off in a contemporary setting but the choices made here on how to approach this were completely implausible.

Basically, even though this is straightforward contemporary novel set in the modern USA, I am expected to accept and believe that in 2012, two children are brought up without any sort of modern amenities without any questioning whatsoever by those around them including the housekeeper, their teachers and gardeners? I am supposed to believe that in 2012, Jack’s loving and concerned father will just let him take this really weird job without ever questioning it? Not to mention that the premise does not hold in terms of internal logic either: the uncle does not want the children to be corrupted by modern society and culture (without any explanation as to WHY) and yet the boy still goes to school off-island where inevitably, he comes into contact with all those things . How does that make internal sense? Not to mention: how is a telephone a corrupting influence of modern society and culture? Of course, all of those choices are needed here so that Jack can write those letters.

That brings me to the biggest flaw of The Turning: its narrative. First of all, Jack does not sound at all like a teenager. Bear in mind that this is a contemporary boy used to the Internet and text-speak and yet he writes these long, formal, polite letters to his teenage girlfriend. Am I supposed to believe that he would be writing those long letters, describing conversations word by word without swearing or using any slang whatsoever?

The main problem with the narrative though is how clumsy and lazy it is. Jack’s letters to his girlfriend and his father just rehash entire conversations that he had with them or mention things they surely already know. Really awkward things like:

Doesn’t Sophie know the name of her own father?

But I could tell he already knew that my mom had died of a stroke when I was six, and I lived with my dad, who never remarried.”

This info-dump can only be for the benefit of the reader since it is information Sophie already knows as his girlfriend. The entirety of the first letter by the way, is Jack telling us Sophie again how he got the job.

”I wish that you were here with me, Sophie. You’d know how to talk to them; you’re the oldest in your family. You had all that practice with your two sisters, your little brother, and then the twins.”

And it goes on and on.

Needless to say, this drove me to distraction and I simply had to put the book down after about 150 pages (out of 243).

Reading Next: Moon Over Manifest by Clare Vanderpool

Joint Review: The Castle Behind Thorns by Merrie Haskell