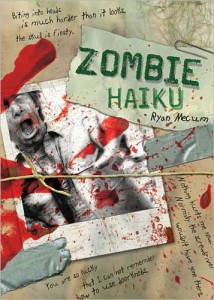 Stand alone or series: Stand alone collection of haiku in a purported journal.

Summary: (from Amazon.com)
What you are looking at is a document from the early days of the zombie plague. Little is known about the author before his infection–only that he was a poet. This facsimile of his actual journal recounts the events of humanity’s darkest hours through the intimate poetry of haiku. Inside you’ll find increasingly disjointed and terrifying three-line poems (all in the classic 5-7-5 syllable structure), and follow the undead poet on a journey through deserted streets and barricaded doors. Experience every eye-popping, gut-wrenching, flesh-eating moment of the eventual downfall of the human race from the point of view of a zombie, and gain insight to help you survive–if you can.

Zombie Haiku is without a doubt one of the most original takes on the zombie in the literary sense. Novels, short stories, comics, traditional verse, they’ve all been done before. But the haiku has remained untouched on the zombie menu. Until now, that is.

A notebook, its pages filled with drawings, scribblings and – of course – haiku, tells the tale of a rather poetic man as the zombie apocalypse strikes. The journal proper begins:

But the actual story begins in another pen. A man named “Chris L.” relates how he is trapped in an airport bathroom, dying from a bite as a horde of hungry zombies lurk outside. All he has is this journal – wrenched from the severed arm of the zombie who bit him – and a pen. So, with his last few hours of life, the man that introduced us to his story stops writing, and invites us readers to read the haiku journal with him.

The journal itself is completely written in haiku, complete with pictures, blood, and illustrations. As my old English professor would love to say, this is ‘form equals content’ at its best. The journal begins with poetic (if silly) beauty, as the journal owner promises so joyfully in his introduction.

The bird flew away
with more than just my bread crumbs.
He took my sorrow.

Initially, the owner puts me in the mind of Brendan Fraser’s super-sensitive-dolphin-safe-tuna dude from Bedazzled, but with each new haiku the horror gradually unfolds. The poet is bitten and becomes one of the undead, and his haiku entries alternate between bizarre and horrific (and morbidly funny). Suspending disbelief that a zombie would retain the ability to write in verse and yet forget how to operate doorknobs or climb fences, Zombie Haiku is a delightful, crunchy, teeth breaking treat. It’s almost impossible to describe without using examples, so here are a few of my favorites, in progression.

Dear Mom I love you.
This ain’t my most poetic,
but I really hurt.

Although my neck hole
used to whistle when I breathed
now I don’t breath.

I lose my front teeth
while trying to pry her hair
out from between them.

She’s always with me,
especially if my gut
can’t digest toenails.

Blood is really warm.
It’s like drinking hot chocolate
but with more screaming.

Brains are less squishy
and a tad bit more squeaky
than someone might guess.

And the Pièce de résistance, from Chris L., trapped in the bathroom:

I don’t want to die.
If you are READING this, please find my wife and tell her I loved her. Tell her I’m SORRY for all the trouble I caused in our MARRIAGE and that SHE was a great wife…

Tell her I LOVED her
and THAT I want To EAT HER
AND SWALLOW HER BRAINS!

Yes, those last lines are written in haiku form! Perhaps that’s what zombies can do? Effortlessly create and write haiku. Brilliant.

Additional Thoughts: After we mentioned Ryan’s book earlier this week, he was awesome enough to email us and give us a list of his favorite haiku from the book, as well as a brand spankin’ new haiku just for Ana and myself!!!! 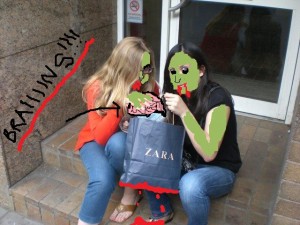 Here are a few of Ryan’s favorites from his book:

My rigor mortis
is mainly why I’m slower,
and the severed foot.

A man starts yelling
“when there’s no more room in Hell…”,
but then we eat him.

I loved my momma.
I eat her with my mouth closed,
how she would want it.

Shotguns don’t scare me,
which explains why I chased him,
and why I’m one-eared.

Love the Dawn of the Dead shoutout.

And, since we are confessed book dorks, check out Ryan’s video, “If Famous Poets Wrote Zombie Haiku”:

More fun is available online at his awesome website. Check it out, if you haven’t already!

Verdict: Hilarious, gruesome, and deliciously horrific. As it turns out, zombies can write haiku–and it’s bloody wonderful. Definitely recommended for any zombie (or haiku) enthusiast!

Reading Next: Happy Hour of the Damned by Mark Henry