A Smugglerific Cover (& Giveaway): The Door at the Crossroads by Zetta Elliott

In which we showcase the cover (with a giveaway) of Zetta Elliott’s The Door at the Crossroads.

Today we are thrilled to unveil the cover and synopsis for The Door at the Crossroads, Zetta Elliott’s long awaited sequel to A Wish After Midnight. 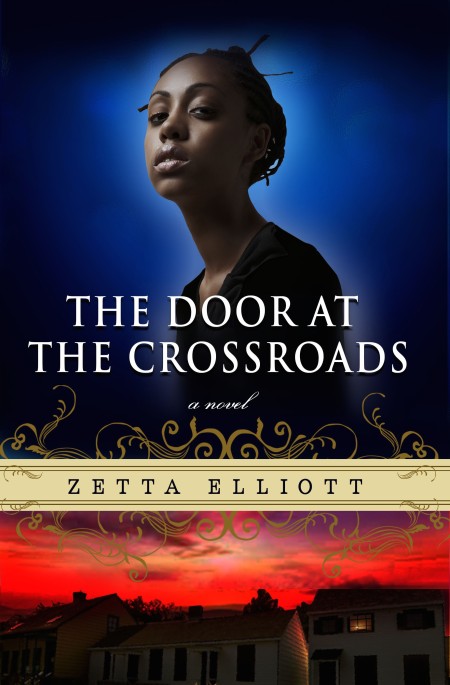 Do you know what your heart most desires?

One summer night, Genna Colon makes a fateful wish that sends her and her boyfriend Judah spiraling through time. They land hours apart in the city of Brooklyn—and in the middle of the Civil War. Genna is taken to the free Black community of Weeksville, but Judah suffers a harsher fate and is sent to the South as a slave. Judah miraculously makes his way back to Genna, but the New York City Draft Riots tear them apart once more. When Genna unexpectedly returns to her life in contemporary Brooklyn, she vows to fulfill the mandate of sankofa: “go back and fetch it.” But how will she summon the power she needs to open the door that leads back to Judah?

The Door at the Crossroads is the long-awaited sequel to A Wish After Midnight by award-winning author Zetta Elliott. Learn more about the author and her other books at www.zettaelliott.com 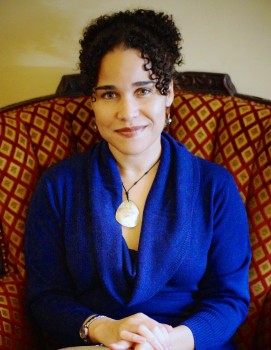 I’m a Black feminist writer of poetry, plays, essays, novels, and stories for children. I was born and raised in Canada, but have lived in the US for 20 years. I earned my PhD in American Studies from NYU in 2003; I have taught at Ohio University, Louisiana State University, Mount Holyoke College, Hunter College, Bard High School Early College, and Borough of Manhattan Community College. My poetry has been published in the Cave Canem anthology, The Ringing Ear: Black Poets Lean South, Check the Rhyme: an Anthology of Female Poets and Emcees, and Coloring Book: an Eclectic Anthology of Fiction and Poetry by Multicultural Writers. My novella, Plastique, was excerpted in T Dot Griots: an Anthology of Toronto’s Black Storytellers, and my plays have been staged in New York, Cleveland, and Chicago. My essays have appeared in School Library Journal, The Huffington Post, and Jeunesse: Young People, Texts, Cultures. My picture book, Bird, won the Honor Award in Lee & Low Books’ New Voices Contest and the Paterson Prize for Books for Young Readers. My young adult novel, A Wish After Midnight, has been called “a revelation…vivid, violent and impressive history.” Ship of Souls was published in February 2012; it was named a Booklist Top Ten Sci-fi/Fantasy Title for Youth and was a finalist for the Phillis Wheatley Book Award. My short story, “Sweet Sixteen,” was published in Cornered: 14 Stories of Bullying and Defiance in July 2012, and my latest YA novel, The Deep, was published in November 2013. I am an advocate for greater diversity and equity in publishing, and I have self-published several illustrated books for younger readers under my own imprint, Rosetta Press. I currently live in my beloved Brooklyn.

We are giving away one copy of A Wish After Midnigh and one copy of The Door at the Crossroads to one winner. Use the form below to enter and good luck!

The Door at the Crossroads is out this week.