Alive boils down to a familiar formula: awesome premise, not-so-awesome execution. Don’t get me wrong–I enjoyed this book very much and it certainly has its strong points, but hot damn does it have some low ones as well. 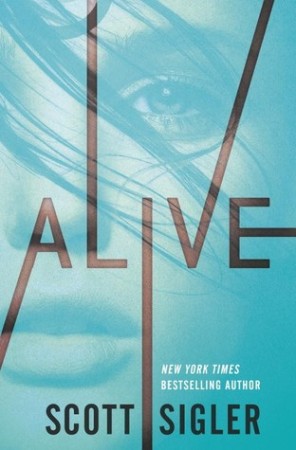 From New York Times bestselling author Scott Sigler comes something utterly new: a gripping sci-fi adventure trilogy in the vein of The Hunger Games, Divergent, and The Maze Runner. A group of young adults awake in a mysterious enclosed space with no knowledge of who they are or how they got there…and an indomitable young woman must lead them not only to answers but to survival.

A young woman awakes trapped in an enclosed space. She has no idea who she is or how she got there. With only her instincts to guide her, she escapes her own confinement—and finds she’s not alone. She frees the others in the room and leads them into a corridor filled with the remains of a war long past. The farther these survivors travel, the worse are the horrors they confront. And as they slowly come to understand what this prison is, they realize that the worst and strangest possibilities they could have imagined don’t even come close to the truth.

Why did I read this book: I am a fan of Scott Sigler’s work, although I haven’t read one of his books since Ancestor several years back. When I saw that the prolific SFF thriller-horror author was branching out into YA and had garnered rave cover blurbs from the likes of Pierce Brown and Cherie Priest, OF COURSE I was immediately hooked.

If you run, your enemy will hunt you. Kill your enemy, and you are forever free.

A girl wakes up in the dark. There’s a stabbing sensation at her neck–a pain so great that it has jolted her from her sleep.

The girl realizes that her parents are nowhere to be found (and on this, her twelfth birthday!).

The girl realizes that she cannot move. Her arms are trapped down by bars, her feet and face are unable to push forward because she is enclosed in some kind of box.

Using all of her strength and desperation and harnessed fear, the girl breaks free of her box, and finds herself in a dusty room surrounded by other coffins–each containing other bodies.

The girl awakens the others, and discovers three important things: 1. Not one of them can remember their names; 2. Everyone believes that they are twelve-years old and that it is their birthday; 3. Not a single one of them knows where they are, or how they got there.

Em–for this is the girl’s temporary chosen name, based on her coffin label “M. Savage”–leads the others away from their coffins, eager to find a way to escape their prison. With every step the group takes, down every dark and musty hallway, they find fear, death, and the legacy of some long-ago war writ in dried blood and brittle, dusty bones.

Slowly–perhaps too slowly–Em and her people realize that their prison is not what it seems. But together, maybe they have a chance at beating the monsters of the past, and at survival.

Oh, Alive. I wanted to like you SO MUCH. I wanted to be blown away, and swept up in your awesome premise and closed-circut/cabin-in-the-woods style story. And, you know, there are parts of you that I enjoyed very much–the underlying premise is wonderful, and the twists and turns, while not entirely novel or unpredictable, are reminiscent of a really good episode of The Outer Limits. Ultimately, Alive boils down to a familiar formula: awesome premise, not-so-awesome execution. Don’t get me wrong–I enjoyed this book very much and it certainly has its strong points, but hot damn does it have some low ones as well.

But let’s start with the good things, shall we? Alive‘s premise is simple and intriguing: a girl wakes up buried alive in a kind of coffin, and must figure out where she is and how she got there. Add to the mix a few OMGWTFPolarBear type reveals: everyone thinks it’s their birthday, everyone believes they are twelve years old but have the bodies of twenty-somethings, no one has any recollection of their names or who they really are, each coffin-kid has a circle implant of some kind in the middle of their forehead… and more. I won’t go into spoilers, but suffice it to say that there are intriguing images and tantalizing teases aplenty in the buildup stages of Alive, leading to all kinds of questions that keep a reader glued to the book–where did the kids come from? Why are all those dead skeletons piled up outside the door and lining the hallways? WHERE are these young adults and why are they there?

Also compelling are the classic tension-building, leadership-challenging tropes that Sigler employs in Alive. Em becomes the de facto leader of the group, having been the first one to wake up and then figure out how to free the others–but while many look to her leadership initially, others start to question her authority because they would rather have that power. How Em comes to terms with her status as a leader, her fear and her belief in her own decisions are the most compelling parts of Alive and Savage, as a character. The challenges to her power, predictably from boys who are stronger and larger than her, or those who believe themselves to be smarter, or those who would rather criticize instead of help, are also genuine, believable threads to the story. In many ways, Alive is an examination of power: who has it, who wants it, and how one maintains that tenuous grip on power after it has been won (usually with blood and fear).

Of course… there’s a ton of really disappointing stuff, too. The biggest offense, in my mind, is the way that Alive panders to perceived popular trends in YA speculative fiction–that is, there’s an insipid, utterly superfluous love triangle (OF COURSE) between Em and two beautiful boys who are as different as night and day. This adds absolutely NOTHING to the text, other than ticking off the “love interest and angst” box on the “necessary plot devices to write a bestselling YA novel aimed at teenagers” list. In other words, it’s pandering bullshit, and it pisses me off–because you don’t need to manufacture a crap love triangle to write a great YA SFF book, and you don’t need to fabricate romantic angst that has no bearing on the plot whatsoever in order to create a bestseller that will resonate with YA readers. This, combined with deadly insta-lust and focus on beauty–“He is beautiful…my insides shiver” or “His eyes…so blue…I can’t look at him any longer”–is incredibly frustrating (not to mention eye-roll inducing). There’s also a weird fixation on boobs and flesh (namely, that these characters think they are twelve but have women’s and men’s bodies, complete with rippling muscles and bouncing boobs) that strikes me, at least, as completely ridiculous.

Writing quirks and pandering aside, the other major issue with the text is that we don’t quite get the depth of characterization we need in order to make the book great. Em has her high points, and her narrative is solid–her questioning of her decisions as leader, the rage and pain she feels at the deaths of others and at the situation she finds herself in are incredibly powerful motivators. However, beyond Em, no one really gets any deeper character development other than the superficial separators that designate one person from the next–there’s the beautiful love interest, the beautiful smart girl who knows how to use technology instinctively, the religious zealot, the brawny warrior who would bully and use brute force instead of relying on intellect… You get the picture.

Still, this is book 1 in a planned trilogy–and boy, does

Notable Quotes/Parts: Read the first 50 pages over at Suvudu.

Book Review: The Duke and I