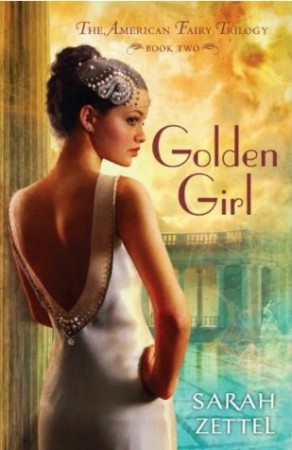 Callie LeRoux has put her grimy, harrowing trip from the depths of the Dust Bowl behind her. Her life is a different kind of exciting now: she works at a major motion picture studio among powerful studio executives and stylish stars. Still nothing can distract her from her true goal. With help from her friend Jack and guidance from the great singer Paul Robeson, she will find her missing mother.

But as a child of prophecy and daughter of the legitimate heir to the Seelie throne, Callie poses a huge threat to the warring fae factions who’ve attached themselves to the most powerful people in Hollywood . . . and they are all too aware that she’s within their reach.

Stand alone or series: Book 2 of the American Fairy Trilogy

Why did I read this book: I recently read and loved Dust Girl, the first book in this trilogy. Obviously, I was going to read Golden Girl as soon as humanly possible!

**NOTE: This review contains unavoidable spoilers for Dust Girl. If you have not read book 1 and want to remain unspoiled, LOOK AWAY. You have been warned.**

Callie LeRoux has left the Dust Bowl behind and, with her friend Jack, has struck out west for California. With its glitz and its glamour, its beautiful people and its desperate wishes for fame and fortune, Los Angeles is the perfect place to attract the Shining Ones. Callie knows that her best chance at finding and saving her mother and father from the Seelie Court rests in Tinseltown, so she and Jack devise a scheme to get on the lot of the biggest of all the movie lots – Metro Goldwyn Meyer Studios. At first, things seem to be according to plan – Callie lands a job as a personal chef for Ivy Bright (the “brightest little star in Hollywood”), Jack works the backlot as a runner, and together the two are getting closer to finding a gate between the human world and the Seelie one. But every step closer Callie gets to discovering the whereabouts of her parents, she also gets closer to real and terrible danger of discovery by both the Seelie court and her Unseelie relatives. Callie must learn how to use her power and decide whom she can trust if she has any hope of rescuing her family and friends from certain doom.

Golden Girl, book 2 in the American Fairy trilogy, picks up shortly where Dust Girl leaves off, dropping Callie and Jack into Los Angeles during the heart of Hollywood’s golden age. While both books are intimately tied to their historical settings, unlike the first book, which focused on an eerie depiction of rundown life in the midwestern Dust Bowl, Golden Girl paints a picture of a very different type of living in 1935 America. Los Angeles (or, more specifically in this book, Culver City) is a far cry from Slow Run, Kansas – not just because of the relief from the never-ending drought and dust, but in terms of overall prosperity and ethnic diversity. Callie marvels at the mix of people of all colors, and, though she’s still ever-conscious of her heritage and continues her attempts at passing, she is amazed when she discovers places like the Dunbar hotel. Golden Girl focuses tightly on the glamour of movies and the culture of the studio around it. Sarah Zettel has clearly done a lot of research into 1930s era Hollywood, from the songs, to the films to the places (there’s a pretty great resource list at the back of the book that includes a number of songs and movies mentioned and ancillary to the book). Even the backlot of MGM Studios is rendered in beautifully detailed light, from the on-studio bungalows, to the different sets and landmarks within – very cool stuff.

Of course, the real draw to Golden Girl is Callie, and the progression of her story. In this second book, she learns more about her parents, about her powers, and her own feelings. While Dust Girl showed Callie on the run and in full-on reaction mode to the fey in her pursuit, Golden Girl allows Callie to form some proactive plans regarding her future, a nice change that also shows some real growth in her character arc. This is really the “Callie coming into her own” book, where she faces some big choices – to trust or not to trust, to help or not to help, to kill or not to kill. Callie starts to understand her power more in this book, but more fascinating to me is how she starts to learn what exactly she wants in this book (all the more poignant because Callie’s power, like any of the fairies of either court, is the ability to grant wishes). She grapples with jealousy for the first time, especially when it comes to Jack’s attentions to Ivy Bright. On that note, I’m a little conflicted about the treatment of the brightest little star in Hollywood (essentially, an older Shirley Temple). I don’t want to spoil anything, but I will say that her arc is unexpected and tragic, and while the ultimate way events play out is favorable for all parties involved, I’m not sure I’m comfortable with the subtext. Still, comfortable or not, Ivy Bright is a fascinating character, and one I wish we had more time with.

On the positive side, I love the continued examination of race in this book. Author Sarah Zettel shows us the glitziness of the golden era of Hollywood – but also its darker side (there’s a particularly terrifying scene between Callie’s father and mother in a cruel, Seelie-fueled minstrel show). I also loved the inclusion of real life figures like singer Paul Robeson as an important character in the text, plus at least some mention of the Harlem Renaissance and how Callie’s own family history ties in to this important time in American history.

Also on the positive side are the fantastical elements and the expanded view we get of the Seelie Court (which we didn’t really get to see in Dust Girl). And, though Callie’s grandmother and grandfather, the king and queen of the Unseelie, have taken a backseat in this novel, we do get to see a familiar face from Dust Girl – plus Callie’s missing father. The beating heart of this story is Callie’s yearning for her family, and it’s a beautiful, powerful thing.

What else can I say? Overall, Golden Girl delivers. This second novel ups the ante enormously and ends in a flurry of action and magic – war is coming, and I cannot wait to see what happens next.

Notable Quotes/Parts: You can read the first 60 pages of Golden Girl online HERE.

Reading Next: The Girl with All the Gifts by M.R. Carey

Over at Kirkus: Courting Magic by Stephanie Burgis