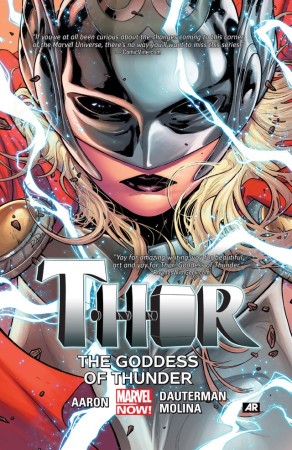 Mjolnir lies on the moon, unable to be lifted! Something dark has befallen the God of Thunder, leaving him unworthy for the first time ever! But when Frost Giants invade Earth, the hammer will be lifted – and a mysterious woman will be transformed into an all-new version of the mighty Thor! Who is this new Goddess of Thunder? Not even Odin knows…but she may be Earth’s only hope against the Frost Giants! Get ready for a Thor like you’ve never seen before, as this all-new heroine takes Midgard by storm! Plus: the Odinson clearly doesn’t like that someone else is holding his hammer…it’s Thor vs. Thor! And Odin, desperate to see Mjolnir returned, will call on some very dangerous, very unexpected allies. It’s a bold new chapter in the storied history of Thor!

Two things I did not expect when I picked up Thor: Goddess of Thunder to read: to get a fully contextualised arc; and to have a smile plastered to my face throughout my reading over the sheer delight of its storytelling.

The former was not only really helpful since this is my first encounter with comic book Thor but also made this particular story a more rounded, fully realised arc that worked within a very specific, ongoing context. More to the point, that foundation made Thor: Goddess of Thunder a better book than I hoped for these reasons:

Context is key: we barely see the new Thor within issue #1. That’s because the story takes a while getting there by establishing the setup with The Story So far.

In a previous storyline involving Nick Fury, The Watcher and Thor, something was whispered into Thor’s ears that caused him to drop Mjolnir and subsequently lose his ability to pick it back up. Basically, Thor is no longer worthy. Not only that, but no one is – not even its creator, the All-Father Odin. Mjolnir sits on the Moon, a desponded Thor lying at its feet begging for answers. Those answers never come and then one day news of an imminent attack on Midgard by the Frost Giants arrive and we learn that the Earth’s biggest heroes are frozen and out of commission. That’s when a mysterious figure arrives on the Moon and this happens: 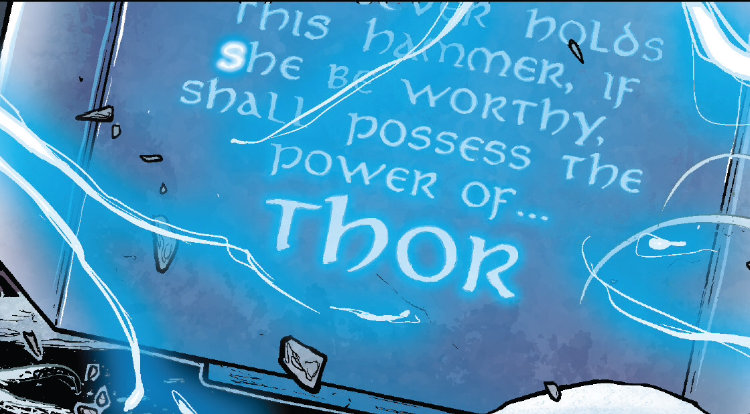 This slow set up is cool because when the new Thor finally shows up, not only do we understand the urgency and importance of this moment from a purely “oh shit, someone better do something soon” but also its emotional framework: we know how much this will affect the first Thor and how. We also know that the new Thor will have a myriad of potential conflicts to get through. And it’s riveting stuff.

Fun factor: from the moment the new Thor steps into our panels it becomes clear that just like us the readers, she doesn’t know HOW or WHY she has been able to get to the Moon and yield Mjolnir –the only thing we know is that she is worthy. The funny internal monologue in contrast to Thor-speak (that old time Asgardian talk) shows us that she is probably a regular human and the mystery of her identity is used to great effect throughout this first volume. At one time when she hadn’t been able to hold Mjolnir for a while and she starts to transform back to whomever she is only to stop this at the eleventh hour. The follow-up to this is original Thor playing detective to find out who she is. Oh man, the hilarity of this.

Beyond that, new Thor’s first encounter with the original Thor – THOR VS THOR! – is fantastic for a multitude of reasons: for the wow factor of their fight, for the momentous, heartbreaking/heartwarming denouement of that scene and for how we see the difference between the two of them and the way they are able to yield Mjolnir. It’s super great stuff.

The feminism is strong with this one: and here we have quite possibly my favourite thing about Thor: Goddess of Thunder. It’s an overtly feminist comic that is completely self-aware of its place within contemporary conversations about comics and women. Two of my favourite panels (below) show this quite well: one has a male villain uttering “Damn feminists are ruining everything” followed by a female villainess’ girl-power solidary high-five.

But more than that, this storyline also juxtaposes Thor’s story with that of Freya’s – the All Mother. In the current storyline, Freya had been running Asgardia whilst Odin was away but his sudden return to reclaim his throne (behaving like the biggest douchecanoe that there is) has left her with nothing to do. OR HAS IT. Because Freya has more to do, places to be and allies to help than Odin expected her to. Her storyline is really awesome too and a little bit heartbreaking. All in all, this is fist pumping stuff.

Add to that the beautiful, clear, clean, bright artwork and I have a new favourite superheroine. 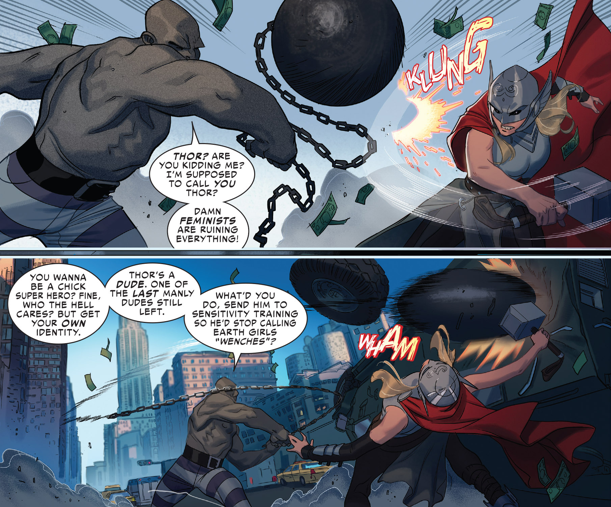 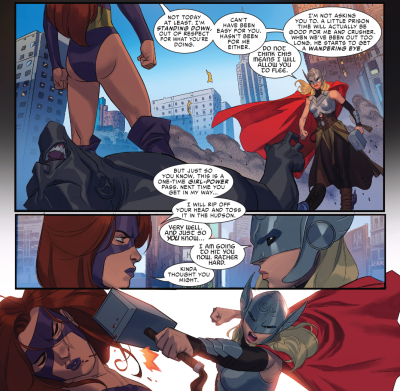 Ebook available for kindle US and comixology/a>